Worth The Wait: Knights Give Kuykendall First Win, 49-7 Over Happy Valley 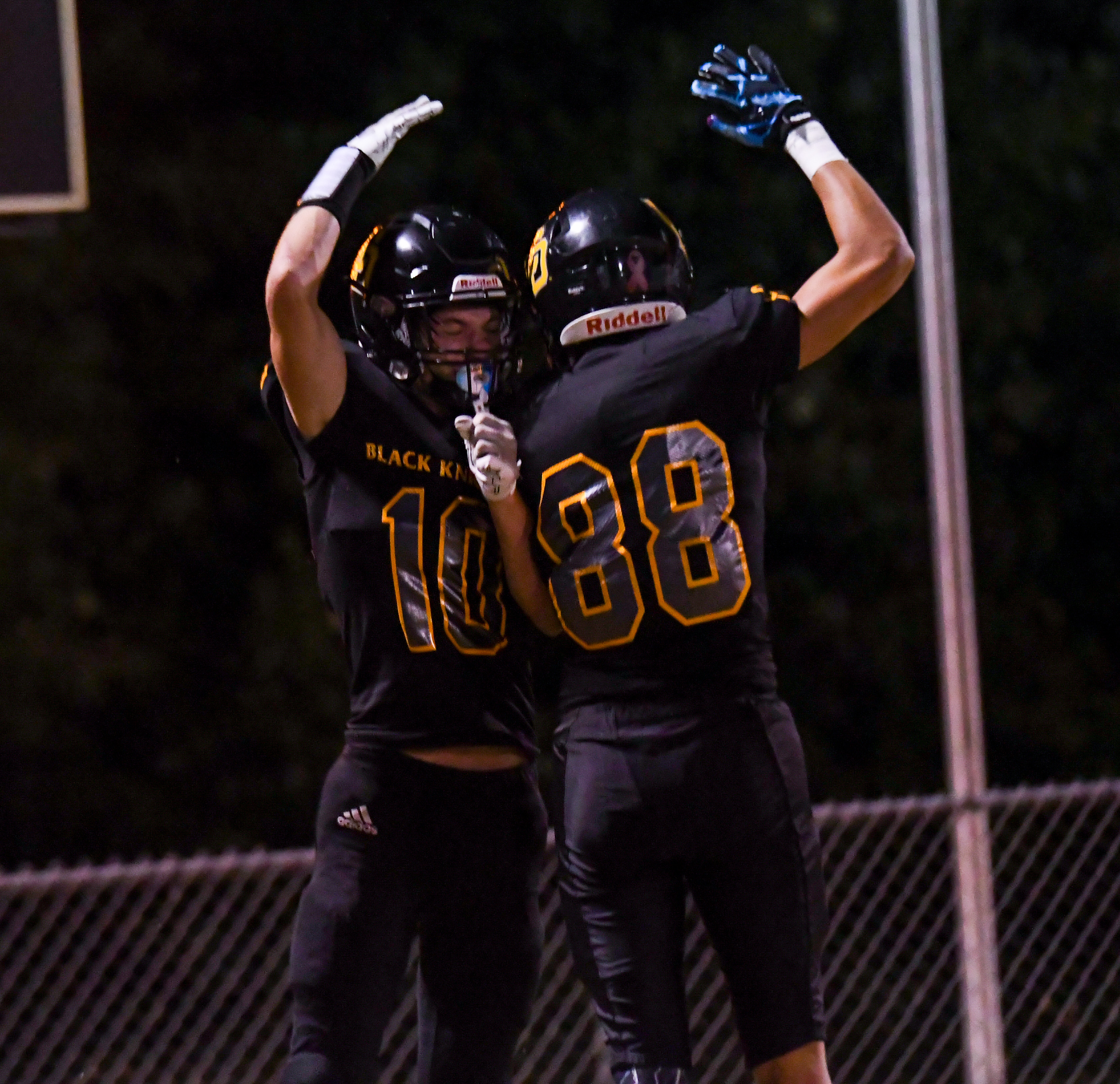 Worth The Wait: Knights Give Kuykendall First Win, 49-7 Over Happy Valley

In the end the wait proved to worth it on Friday night at Chuckey-Doak.

Lightning in the area delayed the start of Friday’s contest with Happy Valley for over an hour then an injury late in the game meant that the final horn did not sound until almost 11 p.m. But none of that made the 49-7 victory any less sweet for Dallas Kuykendall, who earned his first head coaching victory with the win.

“Wow,” Kuykendall said as he tried push back his emotions. “I’m really proud of this effort and I’m really happy to come away with a win at home. This one means a lot to me. A lot of work has gone into this. I’m just happy for these guys, and I’m happy they played well. Right now I’m happy for them, I’ll think about what this means to me later.”

Things looked ominous from the start on Friday, but once the Black Knights’ offense kicked into gear there was nothing the Warriors could do to slow them down. Chuckey picked up 407 yards of offense on Friday with 204 coming on the ground and 203 coming through the air.

“Kudos to the offense, they were clicking tonight despite adversity from the very beginning,” Kuykendall said. “That’s where we want to be, we want to mix it up and be as balanced as possible. We can get it done in the air and on the ground, and I think we showed that.”

Quarterback Cadin Tullock was 13-of-18 passing for 203 yards and three touchdowns. Brock Rush was his favorite target with five catches for 77 yarrs. Austin Morris had 57 yards and a score, while Isiah Treadway and Rio Little also had touchdown receptions.

“I’m very proud of those guys, they did what we see everyday in practice,” Kuykendall said. “Those guys are electric and we just want to let them do their thing. Brock Rush is a hard kid to tackle and you saw that tonight.”

On the ground Brasen Murvin led the Black Knights with 15 carries for 139 yards and three touchdowns.

While the night finished with a blowout win for Chuckey-Doak after the evening’s first drive it certainly did not look like that would be the case.

Happy Valley methodically marched down the field on its first series, using 14 plays to move 70 yards in eight minutes before Joseph Sowards rumbled into the end zone from seven yards for a 7-0 lead.

After that Chuckey-Doak’s defense stood strong and allowed just one more yard the rest of the first half. Things got even better in the second half and until the Knights pulled their first unit the Warrior netted -2 yards. On the final two plays of the night Happy Valley’s Malachi Slover ripped off runs of 40 and 27 yards to almost double the team’s offensive production for the contest.

“That first drive was my fault,” Kuykendall said. “We had some things schematically that we had to fix. I came in thinking we could do one thing and we had to scrap that real quick. The defense stepped up and adjusted to the changes, and we shut them out the rest of the night.”

Chuckey-Doak’s first offensive series was fruitless, but the Knights’ special teams got things turned in the right direction when Little timed the snap perfectly and blocked a punt to set things up on the 10-yard line.

One snap later it was Little who put Chuckey-Doak on the board when he took a swing pass and charged up the hash to knot things at 7-7.

On Chuckey-Doak’s first series of the second quarter it moved the ball at will on the Warriors but had three touchdowns called back. Eventually Murvin got the job done when he plowed up the middle for an 11-yard score that put the Black Knights on top the rest of the way. It was his third time crossing the goal line on the drive.

“We do have to clean that stuff up,” Kuykendall said. “We can’t keep going ahead week to week having touchdowns called back. We have to fix that.”

Chuckey-Doak quickly got the ball back when defensive tackle Richard Sasala jumped on a bad snap.

Murvin then picked up 10 yards through the air that he followed with an artful run in which slipped off tackles and dodge defenders for a 14-yard score that came just over a minute after his first score of the night.

Another tough defensive stand gave Chuckey-Doak another chance to score and Tullock came up with a pair of beautiful tosses just before intermission. On the first toss the senior signal caller bought some time with his legs before finding Morris who brought down a toe-tapper on the sideline. On the next play Tullock fired one to Treadway running a post for a 23-yard score that gave the Knights a 28-7 advantage.

On the first drive of the second half Rush had catches for 12 and 33 yards, but it was Murvin who added to the Knights lead.

Running a speed option to the right Murvin took the pitch from Tullock and once he found some space no one was going to catch him on the way to a 37-yard score and 35-7 lead.

Morris showed off his leaping ability to light up the scoreboard once more. With 5:58 left in the third quarter Tullock found Morris streaking down the left boundary and sent a ball up high in the end zone. The Warriors were in position, but the 6’2” senior snatched the ball from overtop his defender for a 33-yard score.

With time running down Will Garber showed some nice moves on the way to a 32-touchdown and a 49-7 lead.

Marco Rojas was a perfect 7-for-7 on extra points for the Black Knights.