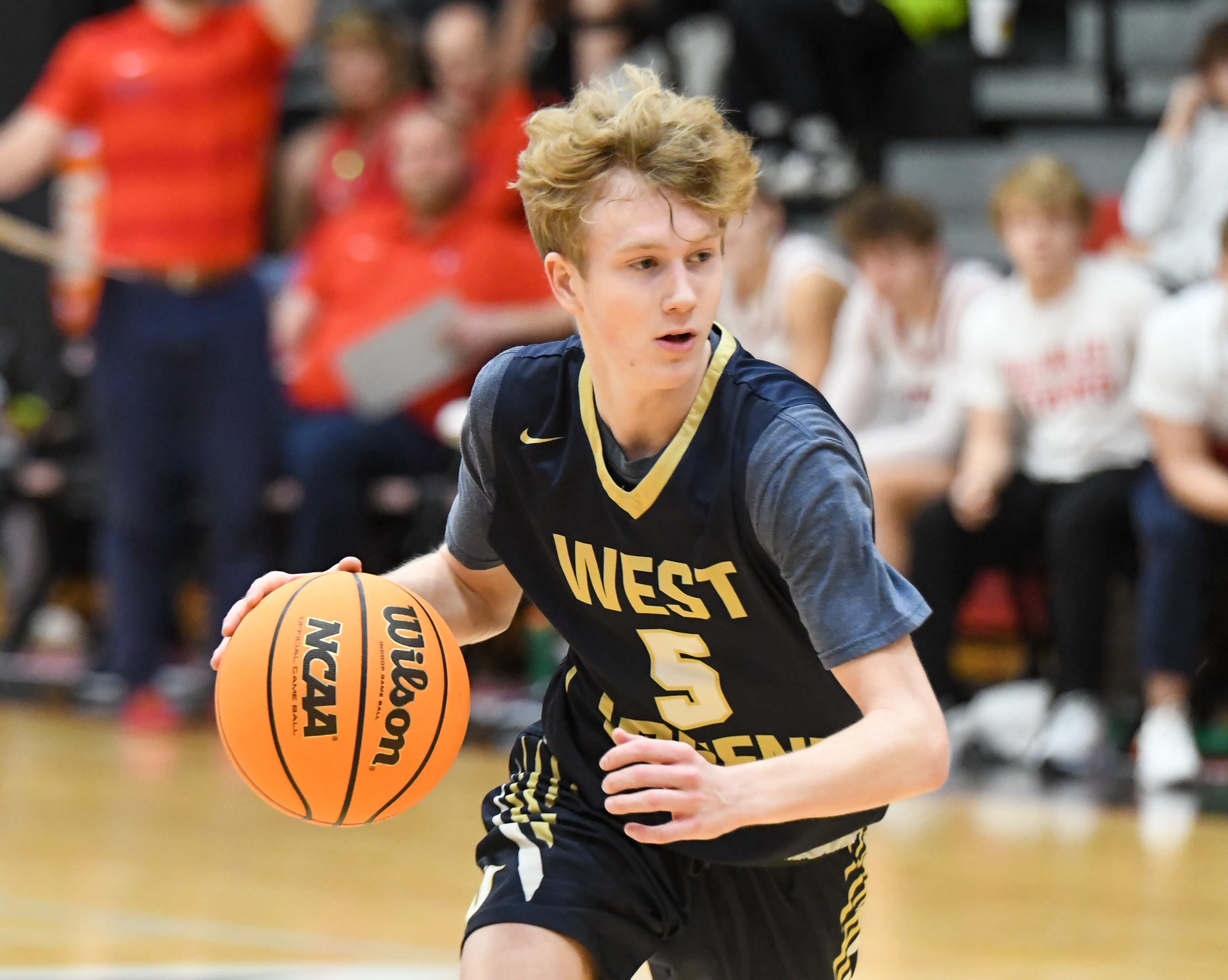 The West Greene boys stayed close with Unicoi County early on Tuesday night, but they could not keep up in the second half, falling 82-65

Frye hit a short jumper in the lane followed by a nice little turn-around jumper to cut the lead to 7-6. Turner then hit two free throws to knot the score at 12-12 at the 3:02 mark.

Mason Hensley hit one in the paint only to be followed by a basket by Turner to tie the score again at 14-14. With 1:35 left in the first quarter it was Turned again from in front to put the Buffalloes ahead briefly ay 16-14. Stone Sparks would score on the next two trips down the court and the Blue Devils went up 18-16. Turner would drive to the basket as the quarter was winding down for the tie at 18-18.

West Greene took the early lead in the second quarter as Turner was open under the goal with a nice assist from Mason McCamey. But then Unicoi's Grant Hensley knocked down a triple from the elbow for a 23-20 lead.

Slagle hit the second of two free throws to put the visitors up 24-20 before Frye used the glass for a layup and then a little jumper in the lane. Hensley followed by sinking another floater in the lane and then another nearly identical shot as the Devils' lead moved to 34-26.

Turner cut the score back to five points with a three from the top of the key.

Then Hensley popped a three from the corner and Eli Johnson a two from just inside the arc. Hensley stole the ball and went coast to coast for the layup to take a 41-30 lead into halftime.

To start the second half the Buffaloes went cold and the Blue Devils took a 15-point lead halfway through the third quarter when Hensley hit a three-pointer from the corner. Frye drove the lane and kicked the ball out to a wide open Turner for a three at the top of the key and then it was Frye hit two from the charity stripe to cut the lead to 10 points at the end of the third quarter at 56-46.

Hensley hit a triple from the top of the key and then another from the corner followed by a three the old-fashioned way from Johnson that gave Unioci a 73-53 advantage.

West Greene coach Allen Tolliver said “A little fatigue set in after not playing for nearly two weeks, maybe had too much time off and they’re a good team. Inside and outside and they go nine to 10 deep. We came out in the first quarter and looked real good, I was very pleased, then as the game went on we got tired that will give us something to work.”

Ethan Turner was honored at halftime for joining the 1000 point club at West Greene. He finished the night with 20 points. Frye led all scorers with 31 points. Hensley led Unicoi County with 22 points.

The West Greene girls also struggled to keep up Unicoi County on Tuesday and fell 56-32.

The Lady Buffaloes started off slow and trailed 8-2 early. Madi Brown hit triple from deep in the corner to get the Lady Buffs going with 2:08 to go in the first quarter. Then Taylor Lawson made a layup from in front. Brown then stole the inbounds pass for a layup and the Lady Buffs were up 10-8 with 1:10 remaining in the first quarter. Abigal Vidrio would hit a short jumper as the quarter was coming to a close and Unicoi took a 11-10 lead into the second quarter.

In the second quarter the Lady Bule Devils took control on offense and defense, scoring 15 point while only allowing two to the home standing Lady Buffs for a 26-13 lead heading to the locker room at the half.

By the end of the third quarter the Lady Bule Devils had built a 27 point lead at 48-21. The Lady Blue Devils of Unicoi County would go on to win 56-32 on a night a dejected Coach Betsy Shaw said, “We didn’t take care of the ball well tonight I didn’t think we were very tough as a team tonight and we didn’t knock down many shots tonight."