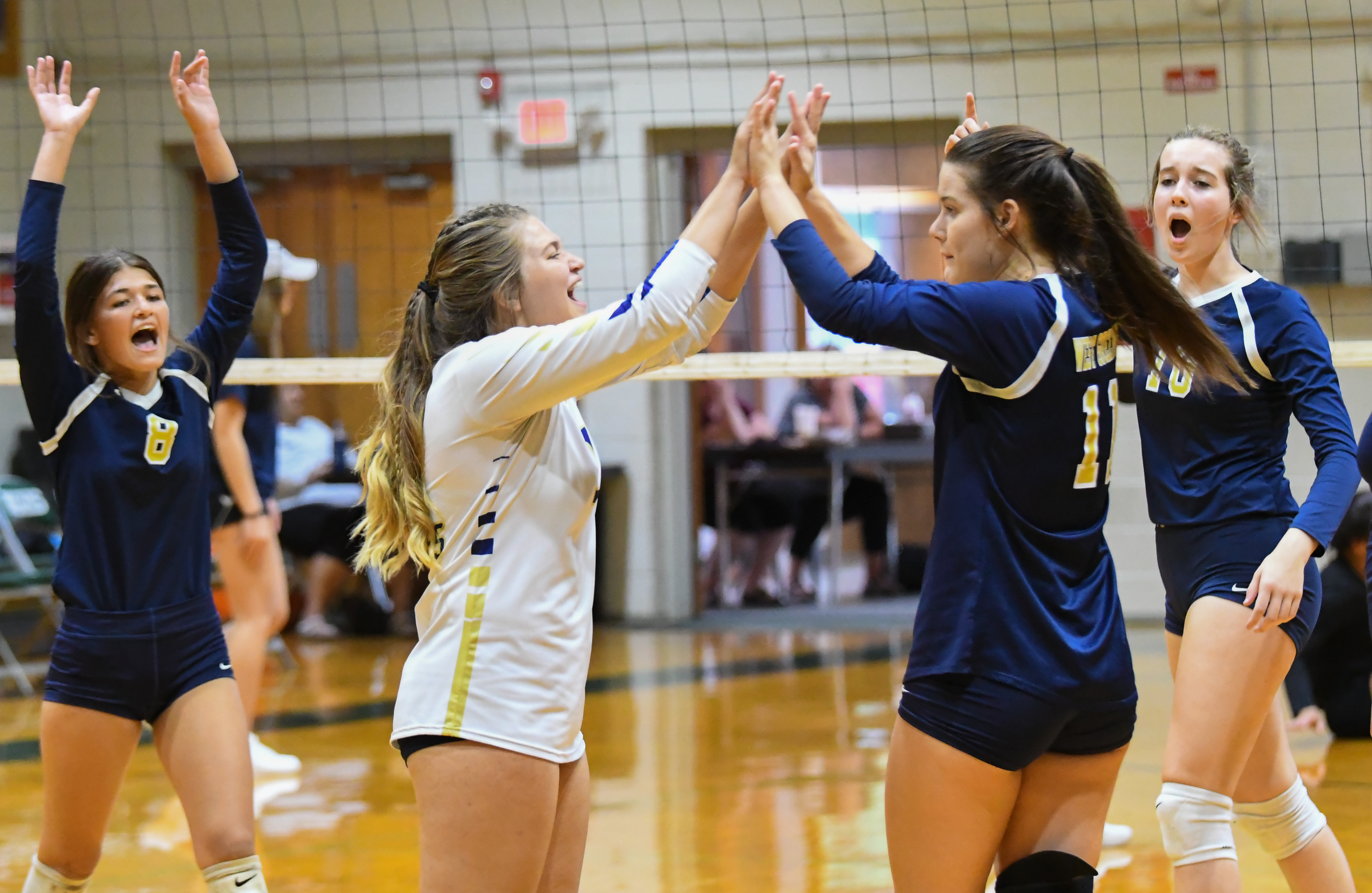 “The girls played like a team today, they didn’t give up when we got down and that is something we have done in the past,” West Greene coach Raven Borie said. “The girls never gave up. Then the big thing tonight was communication. We have not been doing that well early in the season. I told them we are going to have to step that up, and I feel like we really improved in that area tonight.”

The day started with the Lady Buffaloes jumping in front 3-0 after North Greene missed on a pair of kill chances. North Greene got the serve back and behind two aces from Mercy Buchanan tied things at 3-3.

The teams traded points until a tip by Cassidy Hill gave West Greene a 10-8 lead. That lead grew to 14-8 after an ace by Taylor Lawson, a kill from Morgan Brown and dump from Maddie Bryant.

North Greene closed the gap to 16-13 on a block by McKinlee Weems, but the Lady Huskies would not get any closer.

In the closing stretch West Greene got kills from Lawson, Kinsley Ellenburg and Madi Brown while Bryant scored on a dump and tip on the way to a 25-18 win.

West Greene was able to spread the attack around on Monday, scoring from different spots, even the back row, which kept the Lady Huskies off balance all evening.

“I’ve been telling the girls to stay aggressive and to take more swings,” Borie said. “We’re going to make mistakes, but they stayed confident and kept swinging. We want everybody to be ready to hit at all times and Maddie has done a good of spreading the ball around.”

In the second set West Greene jumped in front 6-1 with Lawson and Madi Brown both connecting on kills for the Lady Buffs.

Weems ended the run with a tip for North Greene and the Lady Huskies gradually began to claw their way back. A pair of aces by Gracie Johnson narrowed the margin to 11-8 and then a pair of aces by Grace Buchanan made it 12-11. Johnson then rose up for a kill from the back that tied things at 12-12.

The set was tied four more times but North Greene was never able to move in front.

West Greene took the lead for the last time at 21-20 when Lawson finished a long volley by powering down a kill.

Lawson then ended the 25-22 win with another kill.

In the third set North Greene did everything it could to extend the match, but West Greene was able to complete the sweep.

West Greene started the set by building a quick 5-1 advantage. Madi Brown earned the first point with a kill from the back row and Morgan Brown finished the run with an ace.

North Greene again fought back and after a pair of kills from Rhiley Henry the Lady Huskies tied things at 11-11.

North Greene took its first lead at 13-12 after two blocks by Weems and an ace my Mercy Buchanan.

Neither team led by more than two points the rest of the way with eight ties and five lead changes in the closing stretch.

An ace by Mercy Buchanan pushed North Greene to set point at 24-23, but an error brought the Lady Buffs back to even.

Morgan Brown dropped in an ace for West Greene that gave it a 25-24 advantage, but again an error brought things back to even.

Johnson slammed down a kill to give the Lady Huskies their last lead at 26-25, but West Greene was able to score the final three points.