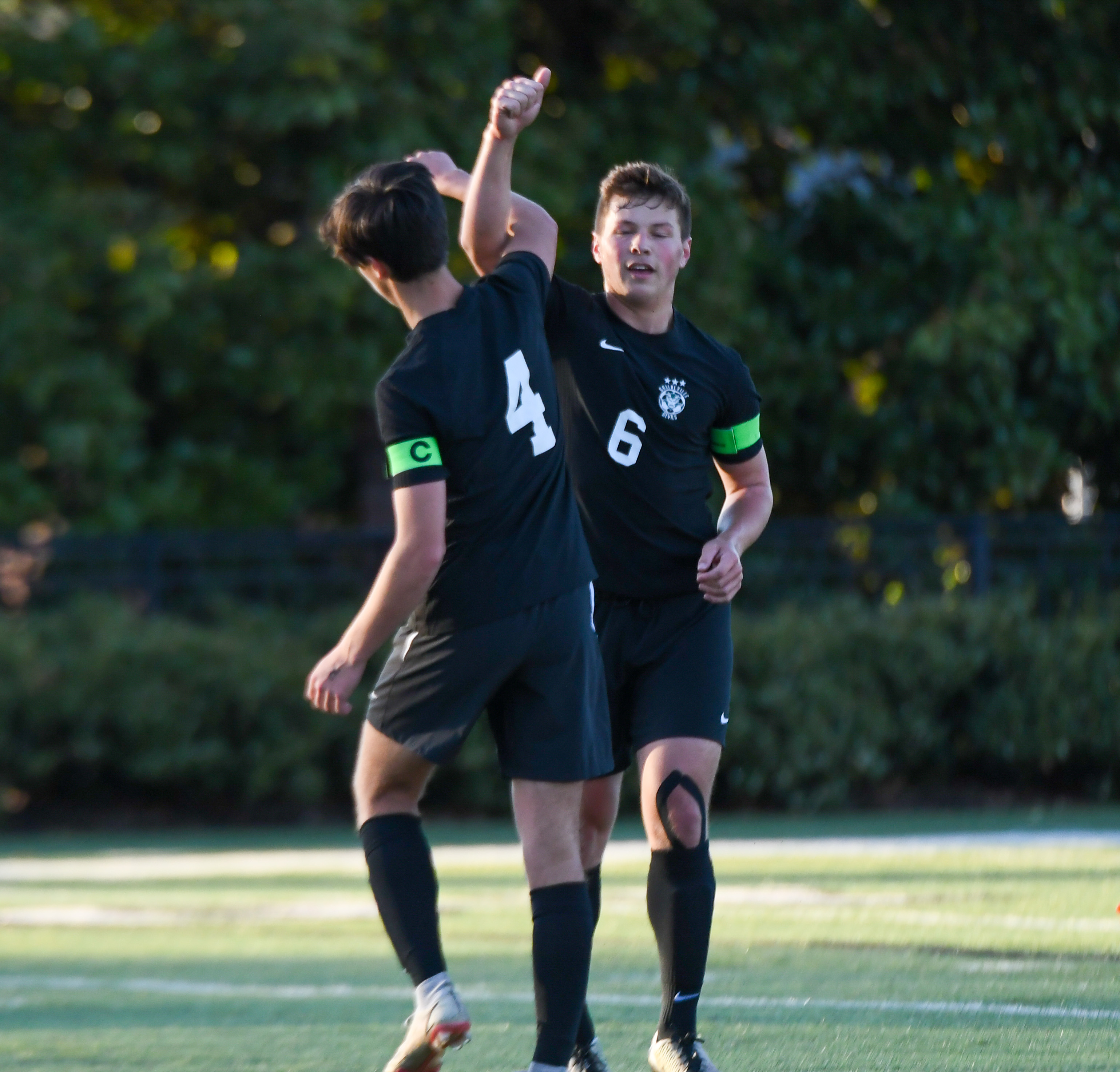 Greeneville soccer weathered the storm from the first half and saw the sun shine in the second as Drew Shelton’s two goals were the difference in the Greene Devils 3-2 win over Christian Academy of Knoxville on Thursday night.

Greene Devils Coach Jerry Graham knew what his team had to do to be successful and carry out their business. Graham mentioned, “We told the guys at the beginning of the game, we’re just trying to minimize mistakes. If we minimized mistakes, then I feel like we could capitalize, and we did a better job in the final third.”

CAK’s hard work in the early stages earned them two corner kicks, but both were thwarted away by Cooper Shepard and Drew Shelton in the box.

After a throw-in from Brady Quillen entered the field of play, Cade Snelson dribbled into the box and slid the ball past Lane Roberts for the first Greene Devil goal of the night.

“He was right place right time that first goal,” Coach Graham mentioned. “It wasn’t some rip in the back of the net, but it doesn’t matter. You’ve just got to be there and put it in the back.”

Connor Stayton delivered a pass into the box that Blake Rogers got a clean header off of but put too much lift on the attempt as it sailed over the crossbar and out of bounds.

Drew Shelton attempted to give Snelson another opportunity in the 16th minute, but the pass was saved by Lane Roberts in the box.

CAK's Chase Stokely had a clean look at the goal and took his shot, but Connor Stayton was placed in the right position to block the shot.

On the next play after a dead ball, a deflected ball bounced off Stokely and landed in the back of the net for a goal in the 21st minute that tied things at 1-1.

Austin Beets battled alone with Dario Love and was tripped in the process. The Greene Devils received a penalty kick upon the foul, and Drew Shelton was called upon by Coach Graham. He didn’t let his coach down by putting Greeneville back ahead with a goal in the 26th minute.

CAK didn’t waste any time getting even and tied things up in the very next minute. After Chase Stokely was knocked to the turf and no foul was called, Parker Weston took the liberty in nailing a shot from 30+ yards to tie the game once again.

Both teams would play neck-and-neck until halftime as the score would remain tied at 2-2.

“We felt like at halftime if we could settle down and come back out and play it at our feet and stop playing that long ball, stop panicking, and just settle down a little bit we’d be able to regain our composure,” Coach Graham stated. “I think settling down at halftime helped us tremendously.”

CAK threatened early as the second half began with Jack Britton attempting a bicycle kick on an incoming corner kick. Kaleab Beck set up for a free kick and fired away, but the strong defensive wall set up by Greeneville blocked the shot.

Brady Quillen was one of Greeneville’s key components in their winning effort with well-timed and well-placed passes that led to two Greene Devil goals.

Quillen fired a pass downfield in the 48th minute that landed at the feet of Drew Shelton and allowed him to hand Greeneville their third goal of the night. Shelton used a strong right foot to send the ball streaking past Roberts and into the back right corner of the net.

Coach Graham said, “Drew’s good under pressure. He had some good balls played into him and Brady had a nice little flick to him.”

Shelton took another shot in the box two minutes later and tried to sneak past Roberts but couldn’t fool the keeper. Cade Snelson almost caught a break in the 64th minute and had a clear field ahead but Lukas Schreuder’s speed allowed him to catch up and make the save.

The Warriors last chance to score came with under five minutes remaining on a corner kick, but the failed attempt would seal their fate in the end.

Greeneville’s halftime adjustments proved fruitful as the Devils came away with a 3-2 victory over the Warriors of CAK.

“We’ve got such belief in them and if they had half the belief that we had in them, think about what they could accomplish,” Coach Graham said. “We believe we’ve got the team that could get to state, and we could do big things while we’re down there but we’ve just got to pull all of those things together.”

Greeneville had 12 shots goal as a team and three of those resulted in scoring plays with Drew Shelton coming away with two goals and Cade Snelson adding one. Brady Quillen also contributed with an assist.

Greeneville returns back home Tuesday afternoon for a matchup with the Tennessee High Vikings. Start time is set for 6:00 p.m.