Turnovers, Injuries Set Back West Greene In Loss To Northview 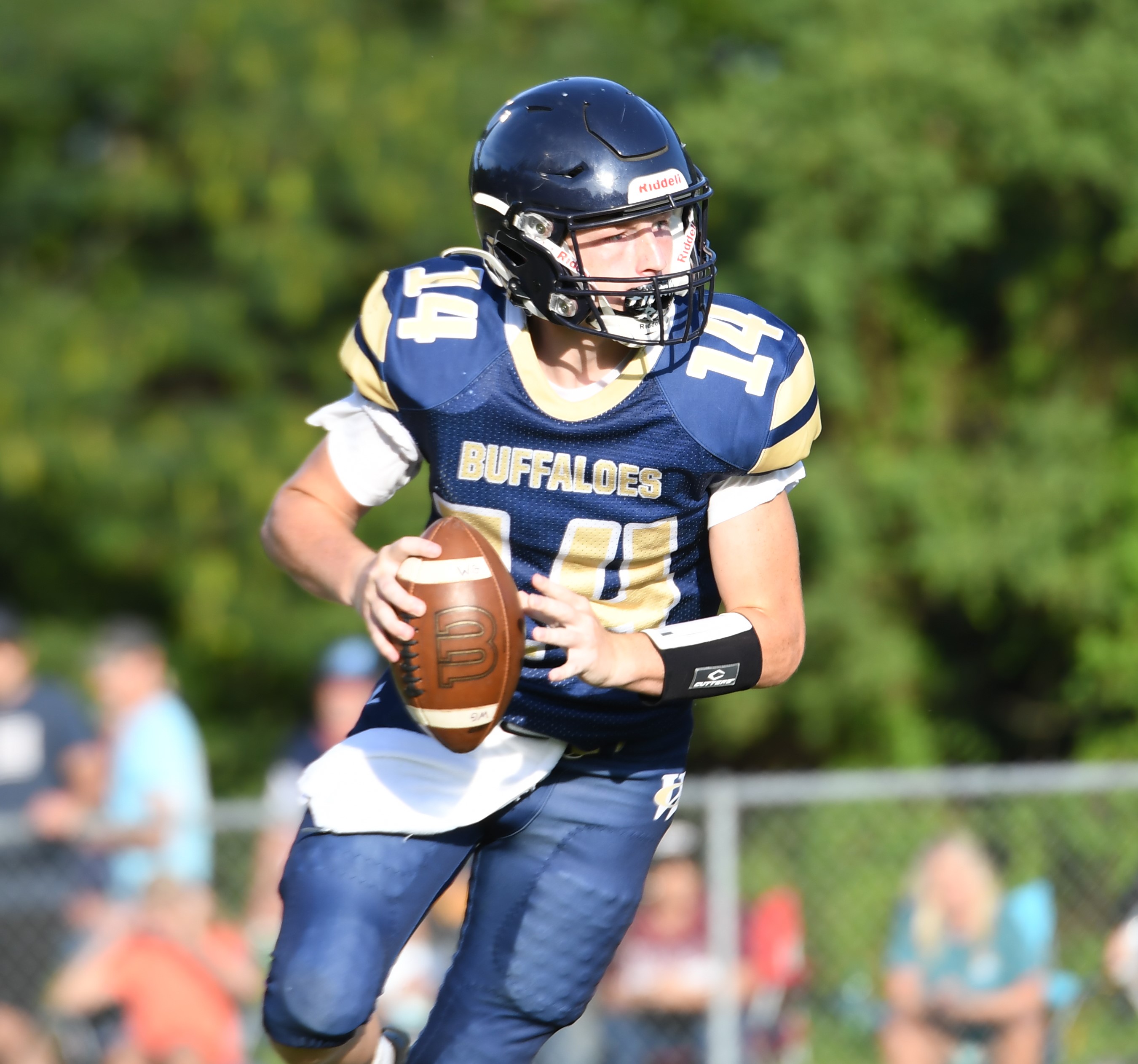 Turnovers, Injuries Set Back West Greene In Loss To Northview

KODAK - Turnovers and injuries along with a tough running attack from Northview Academy was too much for West Greene to overcome on Friday night as it fell 44-13 on the road.

West Greene coach Scotty Verann said after the game “We played the team I thought we would, they didn’t show us anything new, we just didn’t show up. We got a few banged up early and spent the rest of the night trying to find a quarterback. We didn’t block well and overall we didn’t play well. We’ll learn from it and use this to get better moving forward”.

On West Greene's first drive of the night Dawson Daniels was back to pass but had to scramble before fumbling. Northview pounced on the ball and took possession at the Buffaloes' 17-yard line.

From there it only took the Cougars four plays to score when Nick Schroth went up the middle for the final four yards to the endzone for the lead. Ethan Turner came free up the middle to block the extra point to keep the score at 6-0.

On West Greene's second possession they went three and out with Daniels punting and Kerim Durmaz returning it 30 yards to the Buffalo 25 yard line. The Buffs held on a couple running plays and an incomplete pass to put the Cougars in fourth and seven. The Cougars elected not to attempt the field goal and went on fourth down.  DJ Thompson hit Jabriah Atha for a 22 yard touchdown, the extra point was good this time and the Cougars went up 13-0 with 5:11 still to go in the first quarter.

West Greene started its third drive at their own 22 yard line and on the first play Daniels rolled out to the left and was “popped” by Jackson Ghent and was shaken up and had to leave the game. Things went from bad to worse when Mason MaCamey’s pass was intercepted by Tyler Gildersleeve and was taken to the house for a pick six, Jimmy Kuznicki’s PAT was good and the score was 20-0 with 4:14 to go in the first quarter.

McCamey got the Buffaloes going on the next possession by hitting back to back 21 yard pass plays to Turner and Jaden Gregg respectively. The drive took 17 plays and 7:51 while covering 91 yards. Turner Turner capped it by taking a direct snap and scored from a yard out with 8:23 left in the second quarter. The snap on the PAT was off the mark, but the Buffs were on the board at 20-6.

On the ensuing kickoff Javier Wharton was knocked free of the ball and Justin Sentelle recovered for the Buffs at the 25 yard line. A few plays later McCamey Hit Jaden Gregg for 13 yards for a first and goal inside the 10. The Buffs let a golden opportunity slip through their finger when McCamey was picked off in the endzone with 5:11 remaining in the first half.

Northview's offense moved quickly down the field with Atha scoring from 26 yards out. Thompsom found a wide open Evan Poticher in the endzone for the two-point conversion and the score was 28-6 with 2:11 still to play in the first half.

After the kick off McCamey fumbled backwards and the ball was kicked around a bit before it was finally recovered by Jaden Gregg in the endzone for a safety, making the score 30-6.

After the safety Northview Gildersleeve ran for a 36-yard  touchdown and a 37-6 halftime lead.

In the third quarter the Cougars picked up where they left off by scoring in just three plays with Schroth covering the final 10 yards for the score.

Now with the running clock it was just a matter of time. The Buffaloes did put together a drive in the final minutes with Jaden Gregg scoring from a yard out, Kalle Nagel was good on the extra point bringing the score to 44-13 with 1:24 to play.

The Buffs were led by Jaden Gregg rushing 5 time for 53 yards and a touchdown. McCamey finished 8-of-13 for 109 yards and two interceptions. Turner had four catches and 70 yards.

Moody led the defense with seven tackles and one tackle for loss. The Buffaloes actually out gained the Cougars 228-199 in total yardage. The Buffaloes are back in action next week out on the Range against Claiborne County.