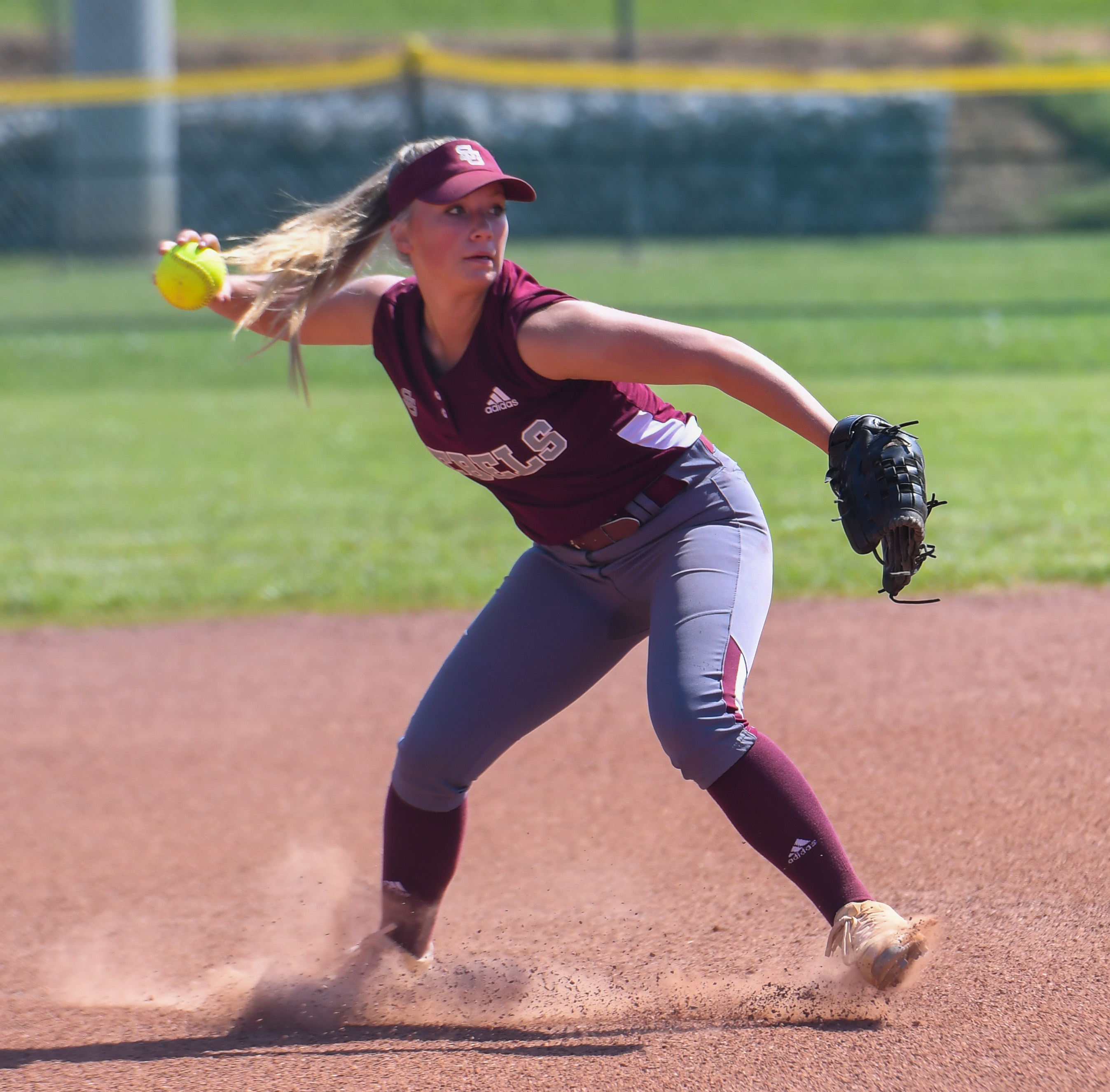 The Greeneville softball team got its Friday afternoon started in the Tiny Day/ Red Edmonds Tournament with a 5-4 walk-off win over West Ridge.

The Lady Devils went into the bottom of the fifth inning trailing 4-3, but Ella Moore, Ashlynn Rachon and Laicy Darnell started the side with consecutive singles. Moore was thrown out at the plate, but Stoan Rader hit into and error at second base that scored Rachon and Darnell to steal the win.

In total Greeneville earned seven hits in the contest with Rachon going 3-for-3 with two runs scored. Darnell was 2-for-3 while Moore and Madison Carpenter each had hits.

In the circle Leah Phillips struck out two, walked two and gave up seven hits in five innings.

Greeneville finished up a perfect 4-0 run through pool play on Friday with a 12-0 win over Johnson County.

The Lady Devils earned nine hits in the contest with Rachon going 2-for-3 with a home run and a double to continue her hot streak.

In the circle Kaley Bradley struck out three, waled one and gave up one hit in three innings.

On Friday in the Tiny Day/ Red Edmonds Tournament South Greene earned a 6-1 win over Carter.

Whitney Casteel led the Lady Rebels’ offense by going 3-for-4 with two double and three runs scored from her leadoff spot.

Anna Willett went 2-for-4 with an RBI. Madison Hensley, Allison Penley and Kaylee Whitson all had one hit a piece.

Also on Friday the Lady Rebels struggled to get any offense going and fell 6-1 to Volunteer.

South Greene’s tournament continued on Saturday where it fell to Morristown West 7-3.

The Lady Rebels earned six hits with Hensley going 1-for-2 with an RBI double. Whitson was 1-for-2 with two RBIs. Casteel, Anna Willett, Allison Penley and Katie Willett all had singles.

Whitson tossed the first three innings with seven hits allowed, no strike outs and no walks.

Miller tossed the final frame with three strikeouts, but a passed-ball third strike and two steals allowed one run to score on a ground out.

South Greene tried to rally to a win against Sullivan East in its final pool play game on Saturday, but came up short in a 7-6 loss.

The Lady Rebels fell behind 7-0 after three innings, but then began chipping away at the lead.

In the fourth inning a pair of errors put two runs on the board for the Lady Rebels. Katie Willet first knocked in Allison Penley with a hard hit ball to third base that Lady Patriots could not handle. Whitson then bunted Willett across and reached safely on another miscue by East.

Casteel closed the gap to 7-3 in the fifth inning when she sent solo home run out of the park in left field.

In the sixth inning Allison Penley got South Greene going with a double to left field. Katie Willett matched it with a double of her own to close the gap to 7-4. Willett went on to steal third and scored on a passed ball.

Whitson, who reached on a walk, was scored on a bunt by Haven Carter to make it 7-6 with the tying run on third base. A ground out and a fly out stranded the runner and allowed Sullivan East to escape with the win.

South Greene earned seven hits in the contest. Casteel went 2-for-4 with a home run and a double. Katie Willett and Allison Penley also had doubles while Miller, Anna Willett and Whitson all had singles.

Fillers started the game in the circle and went 2 2/3 innings with one strikeout, no walks, and seven hits allowed.

Miller finished the game with two strikeouts, no walks and one hit allowed in 2 1/3 innings.

North Greene let the lead get away late twice on Saturday, first falling to Volunteer 6-4 after building a 4-0 lead.

The Lady Huskies started the day by going in front 1-0 on an RBI double from Anna Weems.

Then in the third inning North Greene pushed across three runs with two outs. Weems started things by reaching on an error that allowed Zoe Sanders to score. Kylee Jones then singled up the middle to score Heidi Harmon. Riley Blevins scored Haley Bailey on a shot up the middle for a 4-0 lead.

Volunteer followed by putting its first two batters of bottom of the frame on base, and then Kendra Huff knocked them both in with a fly ball to centerfield.

Two errors early in the fourth inning allowed the Lady Falcons to close the gap to 4-3. Volunteer then went in front when Audrey Evans sent a fly ball to left filed that bounced off of the glove allowing two runs to score.

Another error gave the Lady Falcons an insurance run before North Greene could get out of the inning.

North Greene earned six hits with Weems going 2-for-3 with a double. Jones, Blevins Paysli Randolph and Cambell Gaby all  had singles.

For 4 2/3 innings on Saturday Cambell Gaby shut down West Rdige’s bats, but down to their last out the Lady Wolves rallied to take a 5-1 win.

Anna Grove got the inning started by working a walk and moved from first to third on a sacrifice bunt by Camille Nottingham.

Gaby struck out the next batter, but then on a bunt that followed by Lauren Richardson Gaby let the runner reach safely to hold Grove at third.

Bradlie Warner came up with the equalizer when she traced the third-base line with a single. Natalie Moore followed with a two-run single, and Kendall Nash hit into a  two-run error before North Greene could get out of the inning.

North Greene’s offense earned six hits in the loss. Blevins went 2-for-2 while Weems, Bailey, Gaby and Ashley Fulton all had one hit.

The Chuckey-Doak softball team fell to Unaka 8-3 on Friday in the Tiny Day/ Edmonds Tournament.

In the circle Taylor threw five innings with one walk and seven hits allowed. She only gave up two earned runs.

Chuckey-Doak then fell to Morristown East 3-2 in its night cap on Friday.

In the circle Ramsey struck out two, walked none and allowed six hits.

On Saturday Morristown West got the best of Chuckey-Doak by a score of 15-0.

At the plate Roberts was 2-for-2 for the Lady Knights. Phillips was 1-for-2.

In the circle Taylor gave up 14 hits with one strikeout and one walk.