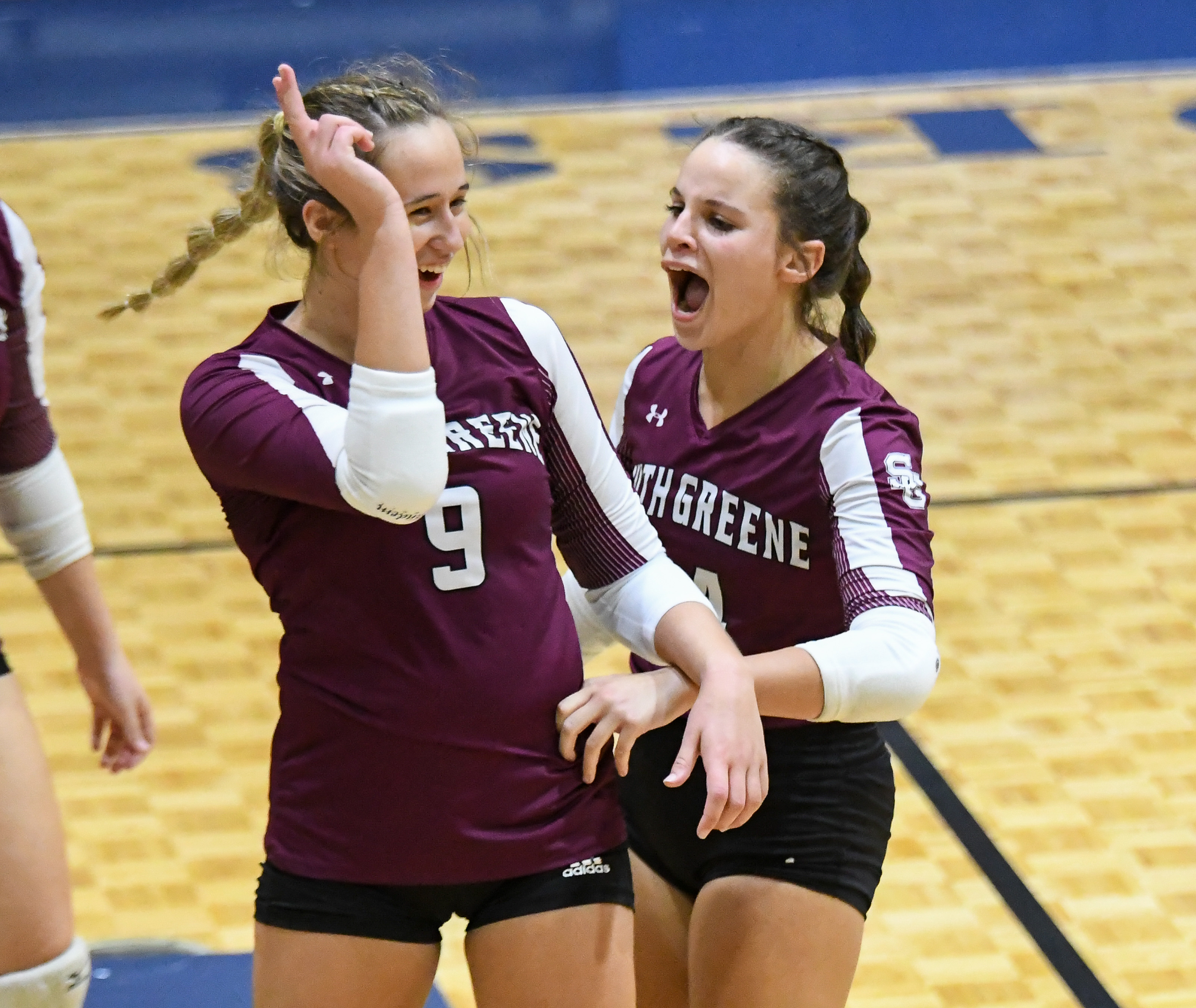 “We played a little better as a team tonight, our passing was a little better than we have been doing,” South Greene assistant coach Mike Taylor said. “The back row is really coming along, Aydan (Dyer), and Macey (Snapp) and the rest of them are making good passes. Then on the front we got the ball down. But we a still have a little way to go to get where we need to be.”

The first set started tight with the Lady Rebels getting kills Jordyn Roderick, Mackenzie Niston and Davanie Tarlton, but a block by Kinsley Ellenburg had West Greene within one point at 4-3.

Consecutive errors by South Greene made it a one-point game again at 6-5, and again mistakes brought the Lady Buffaloes close at 9-8.

With Addison Compton serving South Greene pulled out to its biggest lead of the set at 16-8. Compton had two aces in the run while Ryleigh Gregg, Ava Clark and Macey Snapp all landed kills for the Lady Rebels.

West Greene closed the gap again, using a kill and an ace from Morgan Brown and a back-row kill from Madi Brown to get within two points at 17-15.

Roderick got the Lady Rebels back on track by smashing consecutive kills to put South Greene in front 20-15 and in the closing stretch Roderick added another kill while Niston scored on a block in the 25-18 win.

Roderick finished the night with 14 kills for South Greene while Clark had seven and Niston had five. Addison Compton had 33 assists and Macey Snapp had 15 digs.

The second set was all South Greene, and started with Compton serving it to a 4-0 lead. In the opening run Tarlton scored on a pair blocks.

South Greene’s middle hitters, Tarlton and Niston, made a big difference on Monday as they shutdown West Greene’s attack all evening long.

“The middle was a little bit more active today, and we need that,” Taylor said. “We need to spread the ball across the net, and take some pressure off of Jordyn. That all starts with our passing from the back, and those girls got us going tonight.”

The Lady Rebels’ lead grew to 13-3 after Niston came up with a pair of blocks and Roderick added a pair of kills.

West Greene’s Taylor Lawson scored on a block to narrow the margin to 13-7, but that was the Lady Buffaloes’ last point of the set.

South Greene closed the set on a 12-0 run with Roderick serving. Roderick put down two kills in the final run, Niston scored on a kill and a tip and Gregg put down a kill.

The teams traded points early in the third set until Clark and Roderick put down consecutive kills for South Greene.

With Aydan Dyer serving Roderick added two more kills and and Niston hammered a quick one from the middle for a 9-2 South Greene advantage.

Niston and Gregg continued to pound down kills for South Greene, and helped by errors from West Greene the lead grew to 17-6.

An ace by Madi Brown closed the gap to 18-11 but the Lady Buffaloes could not get much else going.

Clark followed with a kill and Tarlton stuffed another West Greene attempt at the net. Gregg then dropped in two aces to push the Lady Rebels’ lead to 23-11.

In the closing stretch Maddie Bryant and Ellenburg scored on tips for West Greene, but South Greene secured the 25-14 win.