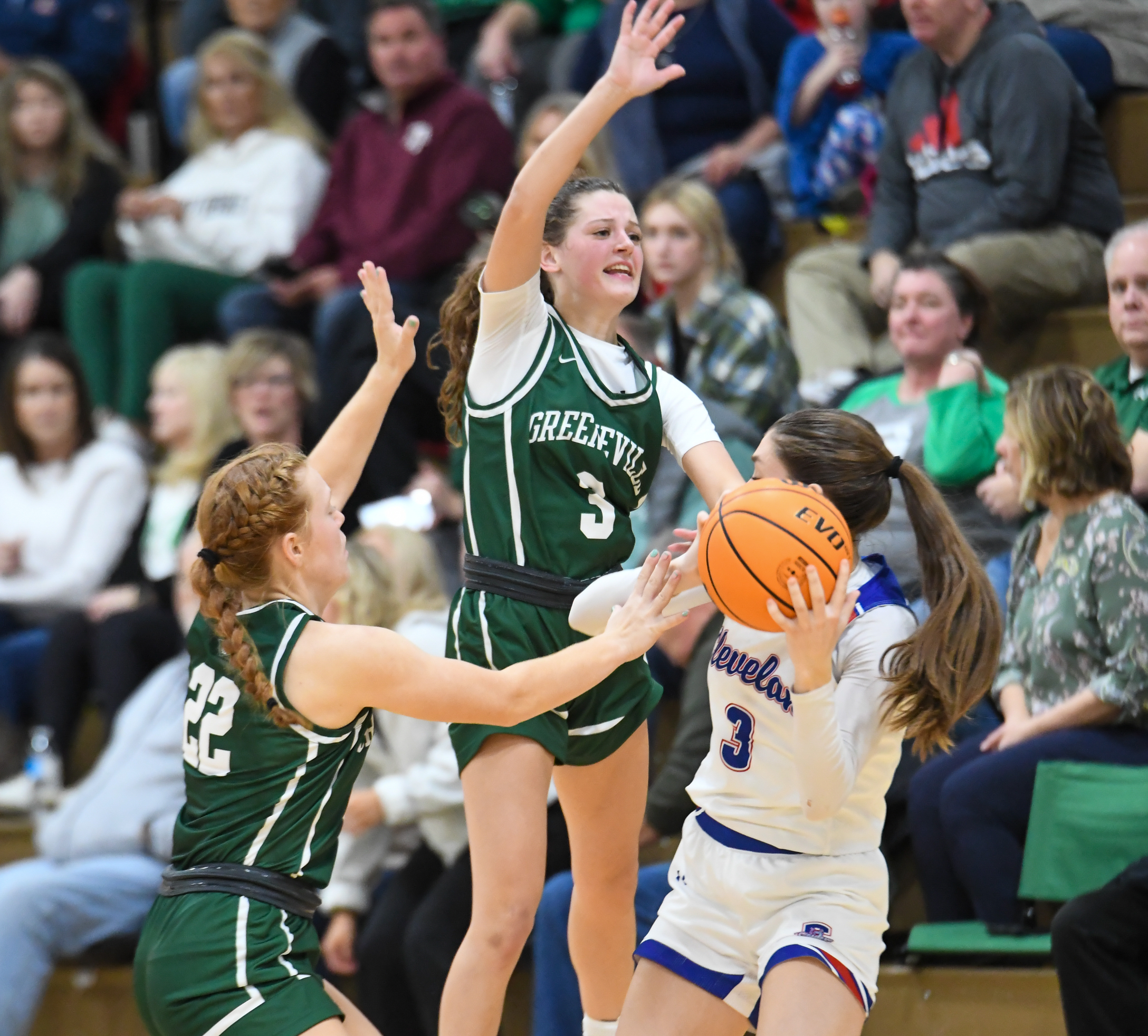 For three quarters on Thursday Greeneville executed its game plan perfectly, but in the fourth quarter the Lady Blue Raiders of Cleveland came charging back.

The Lady Devils watched their 15-point lead almost entirely evaporate, but they held on to secure a 64-59 win, surviving to advance to the Andrew Johnson Bank Ladies Classic semifinals.

“We showed we can survive and advance, and that’s huge,” Greeneville coach Annette Watts said. “We know what we want to do this year, and learning how to do this is part of that. Games like this are what you want this time of year. You want to be playing pretty good basketball, and yet we’re still learning. We executed about as well as we could have in the first threequarters, then the fourth quarter got a little helter skelter. But I told the kids that this was a great learning opportunity.”

The Lady Devils’ attention now turns to Knoxville Catholic, who they will meet at 7:30 p.m. on Friday in the tournament’s semifinals. Greenevillebeat Catholic 56-49 earlier in the year, but the Lady Irish were without star guard Sydney Mains. Watts expects the test to be tougher this time.

“We know we have to contain the Mains kid, but we know what they are about, and they what we are about. We’ll have to come ready to play,” Watts said.

Thursday’s fourth quarter started with Greeneville leading53-38, but within the first two minutes Emma Smith and Makayah Westfield both scored on offensive rebounds and Tyria Tanner easily scored on an inbound play to close the gap to 53-44.

With 4:14 left to play Paige Moody was fouled on a three-pointer and made 2-of-3 tosses to get Cleveland within four points at 55-51.

Milah Williams made it a two-point game with 2:17 remaining when she slashed through the lane and rolled in a layup that made the score 58-56.

Over the next 1:27 Greeneville went 4-of-6 at the charity stripe while two of Cleveland’s top players Addison Hurst and Lauren Hurst fouled out.

The Lady Blue Raiders had one last big play left when Emma Smith nailed a triple from the corner with 38 seconds on the clock to get within three points at 62-59.

Cleveland then forced two jump balls to get possession back with a chance to tie the game. To make matters worse for Greeneville Lindy Carter was called for foul with six seconds remaining, but Jaydin Lee missed the front end of a one-and-one and Lauren Bailey secured the rebound.

Thursday’s action started with Greeneville scoring the first five points with Bailey knocking down a three-pointer and then powering in a layup on an inbound play.

The lead moved to 11-5 when Dalaina Martin grabbed a loose ball from the hardwood and sank a jumper from the elbow. Tambryn Ellenburg then launched a triple with Addison Hurst in her face to make the score 14-7 and the quarter closed with Greeneville leading 16-9.

Bailey picked up her second foul 15 seconds into the second quarter which put her and Chloe Marsh on the bench for the remainder of the first half. That meant Greeneville had to take on the much longer Lady Raiders without their top  two rebounders, but Martin,  Crumbley and Kyla Jobe came off of the bench and picked up right where the starters left off.

“I thought Kaylee Crumbley, KJ and Martin played great there,” Watts said. “They came in and helped us to hold our own. But they do it everyday in practice, and I would expect nothing less.”

With Anna Shaw pushing the pace Ellenburg opened the game up by knocking down a pair of triples from well beyond the arc for a 26-9Greeneville lead.

Late in the second quarter Shaw picked up her second foul, and now with Greeneville down their top two rebounders and top ball handler Cleveland saw an opening that it was able to take advantage of. The Lady Raiders were able close the first half on an 11-2 run to narrow the margin to30-23.  Addison Hurst scored seven points in the run.

In the third quarter Carter caught fire for Greeneville. She started the period with a three-pointer from the top of the key and went on to score 13-points in the period as the Lady Devils began to pull away again. Marsh who came back well rested after playing just four minutes in the first half put in seven points as the lead grew to 53-38.