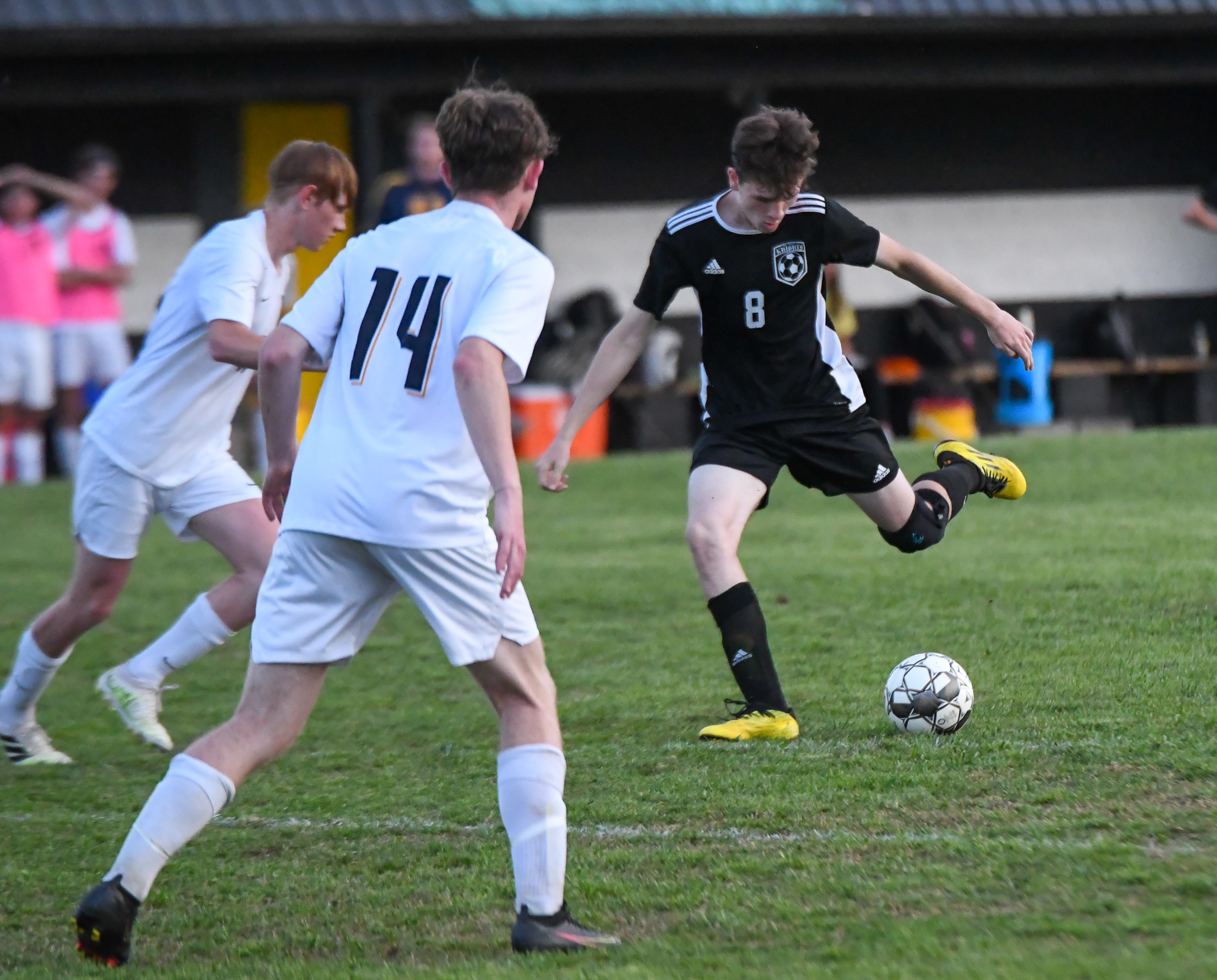 JOHNSON CITY - Chuckey-Doak dominated the first half and had just enough left in the tank in the second half to secure a 2-1 victory over University High in the District 1-1A title game on Wednesday night.

“It’s great. If they aren’t seniors, they’ve never won the District before. We typically finish 3rd in the regular season and then start to pull it together in the playoffs and make it happen,” Black Knights Coach Corey Braithwaite said. “I would like to do both and play well in our district matches in the regular season. But if this is how it has to play out, I’m okay with it.”

The Black Knights suffocated the Junior Bucs in the first half and didn’t allow a single shot on goal for the first 40 minutes.

Abel Pate presented the only threat to score on a breakaway attempt, but Sean Humbert was right there to stick a foot in and kick it away. Another save by Humbert on the corner kick put the Black Knights at ease for the moment.

A smart strategy by Coach Braithwaite on defense made it hard for Pate to create any offense for the Bucs. The forward was marked with a defender at all times to limit his chances to score.

Nic Fugate and Hayden Anderson were tasked with the duties of staying hip-to-hip on Pate for the matchup.

“Their offense runs nearly exclusively through him. And that’s kind of been our game plan all three games,” Coach Braithwaite said. “He creates a lot of opportunities for them. So, the plan was definitely to man mark him sometimes.”

In the early stages, Chuckey-Doak received a push from Ethan Grindstaff in the sixth minute. Roberto Vazquez passed the ball off to Grindstaff and allowed him to maneuver around the keeper and punch home the Knights’ first goal of the contest.

Another opportunity presented itself ten minutes later when a cross from Vazquez was knocked away by Sam McGee and left open in the middle of the penalty box. The Junior Bucs were in better position though and safely cleared the ball from the box.

Vazquez and Grindstaff teamed up once more in the 24th minute to push the Knights’ lead further ahead. Grindstaff ran a great line straight toward the goal with Vazquez running along the end line. Grindstaff put a quick foot on a short pass from Vazquez to give Chuckey-Doak a 2-0 advantage.

“Grindstaff’s struggled a little bit with finishing lately and getting those two early will definitely help his confidence going into Tuesday,” Coach Braithwaite stated.

Grindstaff continued pushing forward and sent a screaming shot at the net towards the end of the half. McGee stepped in front to save another goal from being scored.

University High saw improvements in the second half and had a great chance to pull themselves closer to the Knights with a free kick from Elijah Kadish. Levi Wirt leaped to make a grab but had the ball knocked loose in the air and received help from his defense in thwarting the attack.

Grindstaff seemed to always be in position to receive the ball and almost completed the trifecta with runs at the goal in the 59th and 61st minutes.

McGee had the tough task of dealing with Grindstaff’s breakaways, stopping two of his three attempts in that span.

Grindstaff gave Vazquez an attempt to score and almost caught everyone off guard when he sent a bullet straight at McGee. The keeper put a hand up just in time to tip it over the crossbar.

Some controversy on the field landed Chuckey-Doak in trouble with time winding down. A hand ball on Chuckey-Doak’s part gave the Junior Bucs a chance to pull within one on an indirect kick.

Abel Pate tapped it forward and Braden Williams placed it perfectly over the wall and into the top right of the net to raise the dramatics late.

Williamson would have another shot to tie the game and send it to overtime with a free kick. Only 30 seconds remained on the clock and the Junior Bucs were desperate to score with McGee running down to the opposite side to give UH an extra man.

The kick would sail over everybody’s heads and safely roll out of bounds and Chuckey-Doak would survive a late scare to be crowned D1-1A Champions after defeating University High 2-1.

The Black Knights will host Gatlinburg-Pittman Tuesday night in Region 1-A action.

“Pittman is very good. It will be a hard-fought match and we’ll see how it plays out,” Coach Braithwaite mentioned. “We’re gonna have to be on our game to compete with them.”