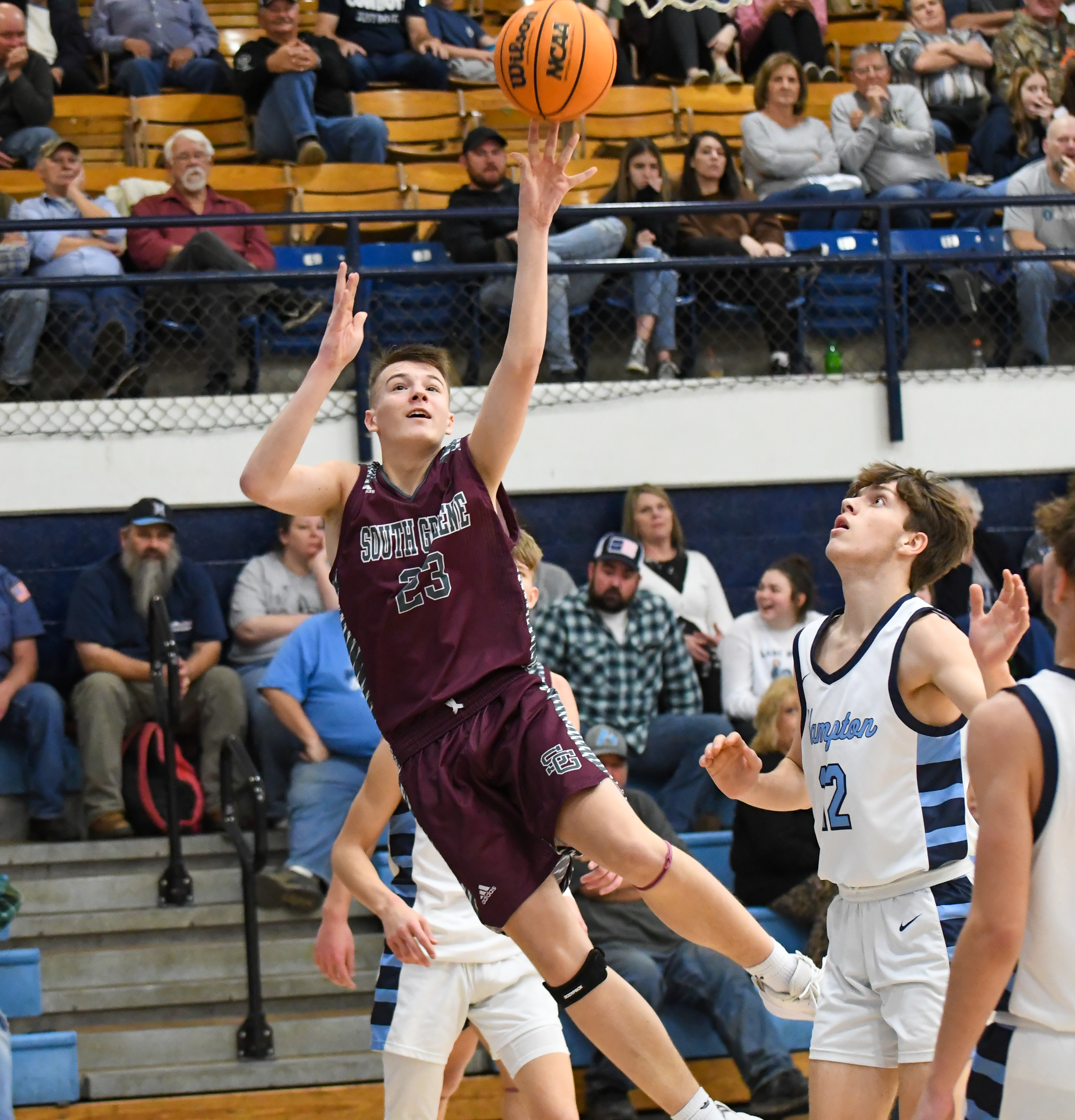 HAMPTON – The South Greene boys had to fight their way back all night long on Monday evening, but in the end Hampton was able to make the right plays in the final minute to escape with a 67-64 win.

“We played a very good basketball team tonight,” South Greene coach Terry Hoese said. “We turned it over 19 times and eight of those were in the first quarter which dug us a hole. But if tonight helps us win a game in March, then so be it. We have to do a few things better, we have to hit free throws and we can’t turn the ball over. I don’t want to lose any game, but Hampton is a good ball team that I think could play for a state championship.”

Monday’s fourth quarter began with the Bulldogs leading 55-52, but Hunter Toth started to make a determined effort to get downhill for South Greene. He was fouled twice and went two-of-three at the foul line before looping around the lane to lay one in that tied the game at 57-57 with 5:06 left to play.

Hampton’s Hayden Campbell answered with a jumper from the right block, but South Greene tied the game again after T.J. Buckner and Jase Roderick each hit one at the charity stripe.

With 1:35 left Buckner drove the lane and dished to Andrew Thornburg who finished through contact for what ended up being three points and a 62-61 South Greene lead.

Then with 50 seconds left Toth slashed into the paint and kicked to Thornburg in the corner. Roderick was trailing the Toth and when the first Rebel cleared it left space for Thornburg to find the second cutting to the basket for a layup and a 64-63 South Greene lead.

Just nine seconds later Cadon Buckles got to the rim against little resistance to put the Bulldogs back in front. South Greene then turned it over on its next possession, and Woody Hixson’s three-point attempt at the buzzer was off the mark which allowed Hampton to escape with the win.

Monday’s action started with the Bulldogs jumping in front while the Rebels struggled to get into any sort of offensive rhythm. In the first six minutes Hampton got seven points from Buckles and six from Campbell on the way to a 15-6 lead. Six of those points were off of turnovers.

South Greene closed the gap to 15-10 with buckets from Thornburg and Hixson, but Hampton’s Michael Anspaugh beat the buzzer with a baseline jumper for a 17-10 Bulldogs’ advantage.

Hampton took its biggest lead at 20-10 inside the first minute of the second quarter before the Rebels began to mount their comeback.

“They are going to push you up the court, they aren’t going to let you walk it up,” Hoese said. “They send two or three people at you and try to make you speed up the game. There were bunch of times tonight that I had kids who normally don’t turn the ball over just having someone take it from them. Hopefully this will be good for our kids, because if we want to compete with good teams we have to take care of the basketball.”

Cooper Kelley got South Greene started with a driving layup and followed with a triple from the corner to close the gap to 20-15.

Kelley hit from deep again and followed that by putting back an offensive rebound to get South Greene to within two points at 28-26 with 2:23 left in the first half.

With 41 seconds on the clock Thornburg swung a pass to Conner Marshall who ripped a triple through the net to cut Hampton’s lead to 30-29.

The Bulldogs then took a 32-29 lead into halftime.

In the third quarter South Greene took the lead for the first time when Roderick went under the rim for a reverse layup that made it 35-34.

The Bulldogs’ lead stretched back out to 43-37 when Campbell made good on a three-point play.

South Greene clawed back and with 1:28 left in the period Roderick darted through the lane and laid one in through contact that closed the gap to 52-50. Then with 16 seconds left Kelley got to the rack to tie things at 52-52.

On the trip the other way Buckles hit from deep to give the lead back to Hampton at 55-52 heading to the final frame.

The South Greene girls let the lead slip away late on Monday and left Hampton with a 63-57 loss to the Lady Bulldogs.

South Greene began the fourth quarter leading 50-43, but it did not take long for Hampton to close that gap, and with 5:16 left Taylor Berry knocked down a three-pointer that made it 50-48.

With 3:32 left Piper Helle stole an inbound pass at midcourt and took it the other way to tie the game at 54-54.

The Lady Bulldogs then went in front for the first time in the second half when Macy Henry made a pair of free throws.

While Hampton was rallying and scoring 13 points in a 3:28 stretch South Greene could not get anything to fall on its end of the floor, only scoring one point during the Lady Bulldogs’ run as the lead grew to 63-55.

Monday night began with Hampton scoring the first five points, but it did not take long for the Lady Rebels to take the lead.

Hailey Brooks used a trey in transition to tie things up and Jordyn Roderick made it 6-5 by making one at the charity stripe.

Ryleigh Gregg, Roderick and Brooks each connected from behind the arc over the next two minutes to give South Greene a 15-12 lead.

The Lady Rebels then made a pair of passes over Hampton’s press to Kortnei Bailey of who finished with a pair of breakaway layups for a 19-17 lead.

Hampton took a 20-19 lead into the second quarter when Madison McClain beat the buzzer with a three-pointer.

South Greene started the second quarter on an 8-0 run. Madison Hensley started things with a three-pointer and added a pair of free throws after a steal. Brooks scored three points the old-fashioned way in the stretch as South Greene took a 27-22 lead.

The Lady Rebels then went on a 10-2 run to take a 37-26 lead. Five different South Greene players scored in the stretch.

Brooks and Roderick each scored three points in the early portion of the second half as South Greene held on to a double-digit lead until the 4:16 mark when Henry made a free throw to narrow the margin to 45-37.

Henry went to the rim again with 1:56 left in the third quarter to cut South Greene’s lead to 48-43. The Lady Rebels went to the fourth quarter leading 50-43.

Brooks led South Greene on Monday with 21 points and Roderick put in 11 points. Bailey and Hensley each scored nine points.

Berry scored 17 points for Hampton. Helle and Henry each had 13 points and McClain scored 11 points.