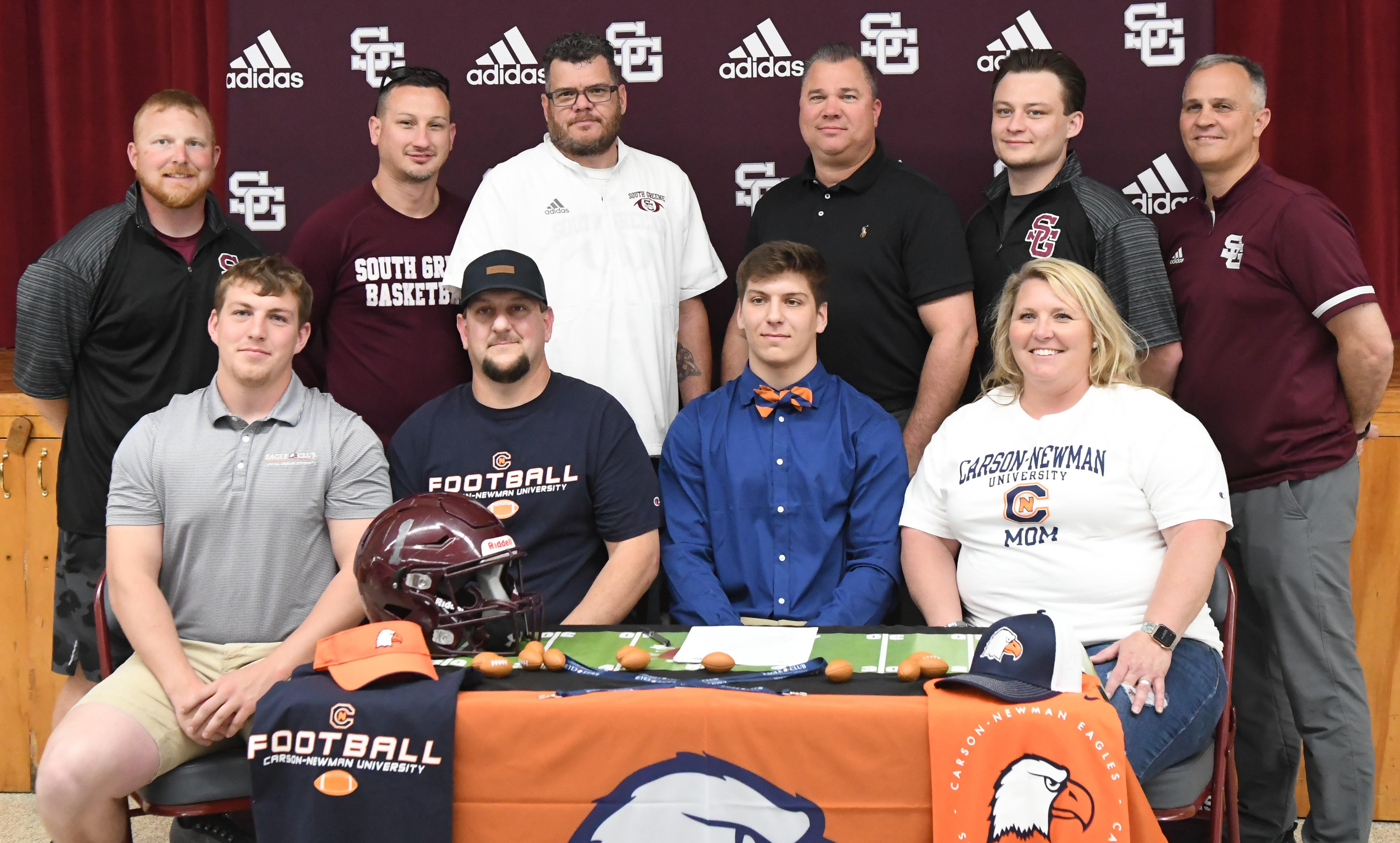 Luke Myers has left an indelible mark on South Greene High School in his four years with the program, and on Thursday his time with the Rebels symbolically came to an end as he signed his letter of intent to join the football program at Carson-Newman University.

In his time at South Greene Myers was part of the winningest senior class ever to play for the Rebels, with 39 wins in four years. He became the program’s Mr. Football finalist as a junior, and was again named a semifinalist as a senior. He was also twice named to the TSWA’s Class 2A All-State Team.

“It’s one of those things I’ll look back on and be glad it happened,” Myers said. “We have definitely done some things that nobody else has, and that is something we can look back on and be proud of. It’s special to leave that mark, but now I’m ready to fulfill my destiny somewhere else.”

Myers finished his senior season with 2,848 passing yards while completing 71 percent of his passes with 33 touchdowns. He also ran for 536 yards and 11 more touchdowns.

Now he is moving on to the Eagles and will be joining his brother, Levi, who is in his third season in Jefferson City as a linebacker. The chance to play with his brother again was a part of why Myers chose Carson-Newman as his college destination.

“I narrowed it down Carson-Newman and ETSU, but ultimately, I wanted to play with my brother,” Myers said. “Knowing a lot of his friends that play football it made the decision a lot clearer for me. Levi knows the program and how things go, so he explained a lot of things to me and I think that will help me get started.

“I’m sure my family and the community is excited to see us on the field together again, and I’m looking forward to spending a couple of more years on the field with him.”

While Myers is excited to play with his brother again, it won’t come without a little bit of sibling rivalry as they line up on opposite sides of the line of scrimmage. Eagles coach Mike Clowney has promised to get the best of that rivalry from the start.

“The head coach told me that they might line me and Levi up against each other first thing in practice to get the team fired up. I’m not looking forward to that being at quarterback, but I think it will be fun,” Myers said.

The Eagles run a triple option offense that will be quite different that the pass-happy attack the Rebels employed this year, but Myers thinks that he has the ability to be successful the new system.

“They run the triple option and I feel like I fit into that pretty well. I feel like I run the ball pretty well, but I can also throw it,” Myers said. “It’s going to be a huge step up from high school, but I’m looking forward to competing and bettering my game.”

Quarterback will be where Myers starts at Carson-Newman in the fall, but he is open to the possibility of playing receiver or safety.

Carson-Newman is coming off a 1-9 season in 2021, but that is only its second losing season in the last decade. The Eagles went 9-3 and made the playoffs in 2019, their last full season prior after missing all but one game in 2020 because of the COVID-19 pandemic.