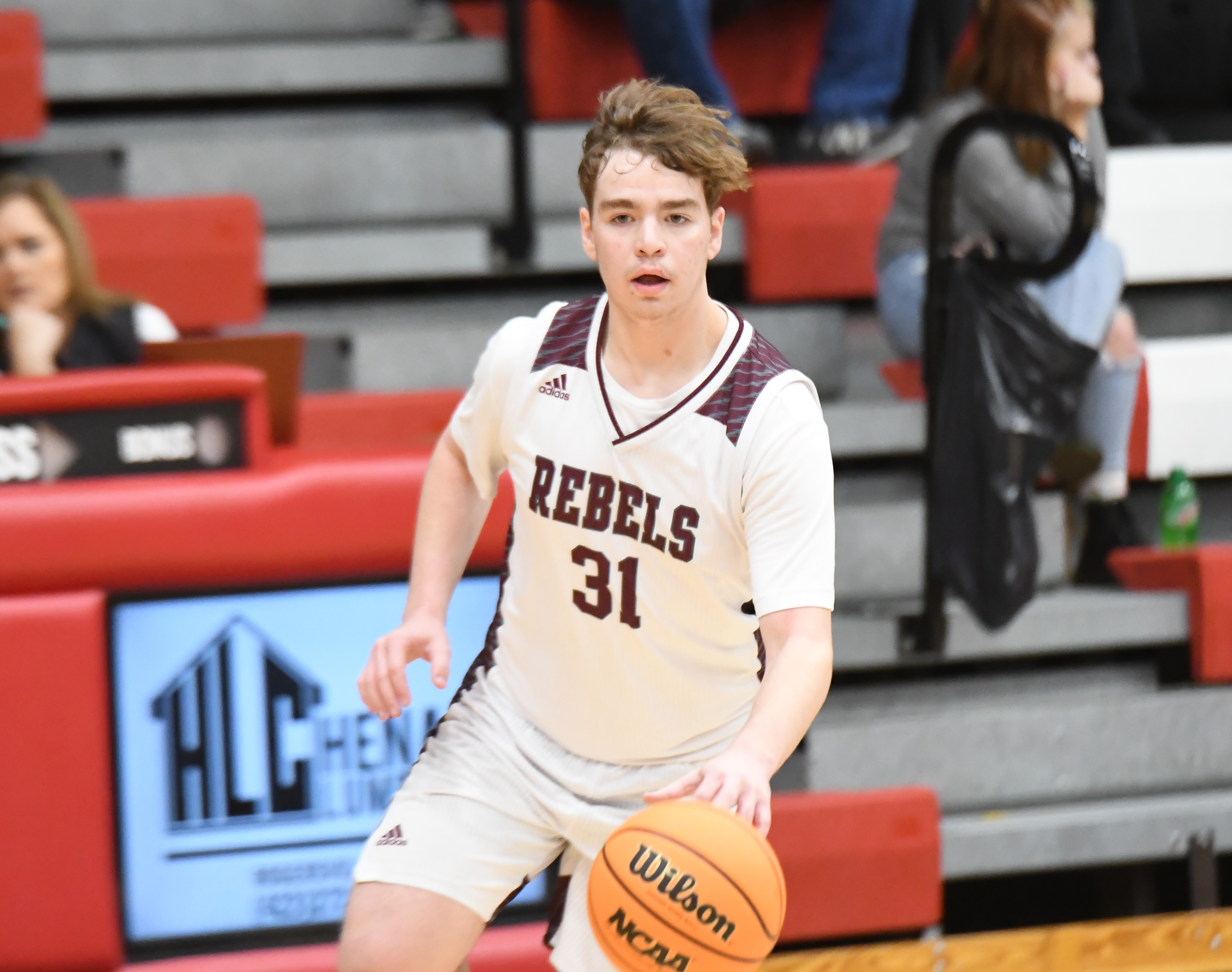 South Greene was nothing short of an offensive juggernaut on Tuesday night with all eleven players scoring, including five reaching double figures, in a 92-48 winning effort over Happy Valley. The win is the Rebels’ second of the year in District 1-2A action and puts them at a perfect 2-0 so far on the year.

“I think I had five guys in double figures and that doesn’t happen very often. We shot the ball pretty well tonight and played hard,” Rebels Coach Terry Hoese mentioned.

Woody Hixson shot lights out from the three-point line with six buckets from downtown in a 21-point night. Cooper Kelley nailed two shots from long-range in a 16-point performance.

“The difference tonight was Cooper Kelley and Woody Hixson both were on at the same time,” Hoese said.

The Warriors came out hot and kept the game close from the opening tip-off. Ron Parker’s five early points had Happy Valley ahead 9-6 in the opening stages.

Jase Roderick fought through contact to finish an and-1 play at the rim and completed the three-point play at the line. Quick layups from TJ Buckner and Andrew Thornburg reversed the lead and put it into South Greene’s favor. Cooper Kelley’s three-point shot and Buckner’s layup lifted that lead to 15-9.

Parker would convert an and-1 play at the charity stripe to cut the Warriors deficit back down to three.

Woody Hixson‘s first triple helped push South Greene’s lead to 22-12 to give them extra comfort towards the end of the first quarter. Hayden Birdwell got the ball off just in time to beat the buzzer on a layup to send them into the second quarter with a 24-12 advantage.

Birdwell and Kelley used the glass to their advantage with layups to start the quarter.

Dakota Grindstaff kept Happy Valley’s motor running with a floater and a three-point bucket from beyond the arc.

Woody Hixson fired away and cashed two more three-pointers to lift South Greene’s lead to 35-19. Conner Marshall gained two points on a pull-up jumper near the free-throw line. Zane Winter slashed through the lane and kissed the ball off the glass for an easy lay in.

Cole Deakins opened up the new half with a long-range three and Ron Parker followed suit with a triple in the corner not long after.

TJ Buckner took control of the game for a moment and effortlessly grabbed an offensive board and laid it back through for two. A steal on the defensive side led to a quick finger roll layup for the junior post.

Dakota Grindstaff spotted up along the perimeter and knocked down a three-point bucket.

Hayden Birdwell caught a wild pass for a steal and took the rock coast-to-coast for a layup. Buckner scooped another offensive rebound off the glass and dropped another two points through the net. Hunter Toth went a perfect two-for-two at the free-throw line to add his name to the scoring sheet.

Hixson torched the nets for a trio of three-point bombs in the fourth quarter to finish off his hot night of shooting. Will Arrowood and Cayden Fillers gained valuable playing experience late in the fourth quarter and added their names to the scoring column to complete South Greene’s night.

Every player touched the floor and every player scored in a dominant 92-48 victory for the Rebels over Happy Valley.

South Greene turns the page for another conference showdown with the Johnson County Longhorns on Thursday night.

“Overall, I was satisfied with our play. We’ve got to carry this over into Thursday night and play Johnson County,” Hoese stated.

‍
The South Greene girls could not seem to miss from long range with fourteen three pointers made in a 67-29 win on the road over Happy Valley to earn their second conference win of the season.

“We’re trying to make that second half push and we’re going in the right direction,” South Greene Head Coach Stephen Gregg stated. “We’ve kind of found our identity with all the adjustments and the things that have been thrown at us. You’ve got to brag on them and lift them up and keep teaching and working them.”

South Greene moves to 2-0 in district action this season and gets a much-needed road win under their belt early into their conference schedule.

Ari Hoese and Ryleigh Gregg were red hot from downtown combining for nine three pointers and 33 total points to lead the charge for South Greene. Hoese led the team with 17 points and Gregg followed closely behind with 16 points.

“We’ve got really good weapons behind the three-point line if we’re not forcing step back shots or dribbling into a three,” Gregg said. “When we’re hitting the outside shot it kind of sparks everyone.”

It took three full minutes for either team to finally find the bottom of the net. But when they did, Hailey Brooks splashed a three-point shot from long range as the Lady Rebels drew first blood. Jordyn Roderick fired away next and got a triple to fall and South Greene jumped ahead 6-2 halfway through the first.

Ari Hoese added a three-point basket off the bench to start her night. She’d only settle for three points in the first three quarters of action, but made the biggest splash later in the fourth quarter.

Roderick stole the ball from the hands of a Happy Valley player under the basket and quickly turned it into two points with an assist to Madison Hensley on a reverse layup. The Lady Rebels took control early and held a 13-4 advantage after one quarter.

Ryleigh Gregg heated up from behind the three-point line in the second quarter and hit two triples on back-to-back possessions down the court. Hailey Brooks and Haley Susong worked a successful fast break trip down the court that ended with Susong laying it in for two.

It took the Lady Warriors eleven minutes to finally get a field goal to fall with Mailey Guy getting the first shot to fall. Guy would come up big on the defensive end too with a block in the low post moments later.

Gregg’s hand stayed hot with another three that broke the thirty-point mark and had the Lady Rebels ahead 30-7. Roderick fired away and drained a triple from behind the arc to keep the shots falling.

Mailey Guy added a layup and mid-range field goal with time winding down in the half.

South Greene’s red-hot shooting in the second quarter produced 23 points and boosted their lead to 36-13 at the half.

Guy remained Happy Valley’s main source of offense with a layup on the block at the beginning of the third.

Haley Susong sprinted down the left side of the court and laid the ball off the glass for a layup in transition. Susong scored nine points and also grabbed nine rebounds to lead the Lady Rebels on the glass.

Ryleigh Gregg nailed her fourth three-pointer of the game from the top of the key. Madison Hensley fired away next and landed a three-pointer through the net for her only triple of the night.

Jordyn Roderick played lockdown defense in the post with two stuffs in the paint. Hailey Brooks added a block to go along with her pair.

The Lady Rebels led 50-20 going into the fourth quarter.

Ari Hoese had her breakout performance in the fourth quarter by scoring fourteen of South Greene’s seventeen points on four three-point bombs and a baseline floater. She’d rack up a team-high 17 points to help fuel the Lady Rebels’ victory.

“It was good for her to have that kind of night. I don’t think she would have missed if she kept shooting. It was one of those nights,” Coach Gregg said.

Jordyn Roderick scored her third three-point basket from the top of the key to add the other three points to South Greene’s fourth quarter total.

The Lady Rebels cruised to a 67-29 win over Happy Valley to notch their second win in conference play.