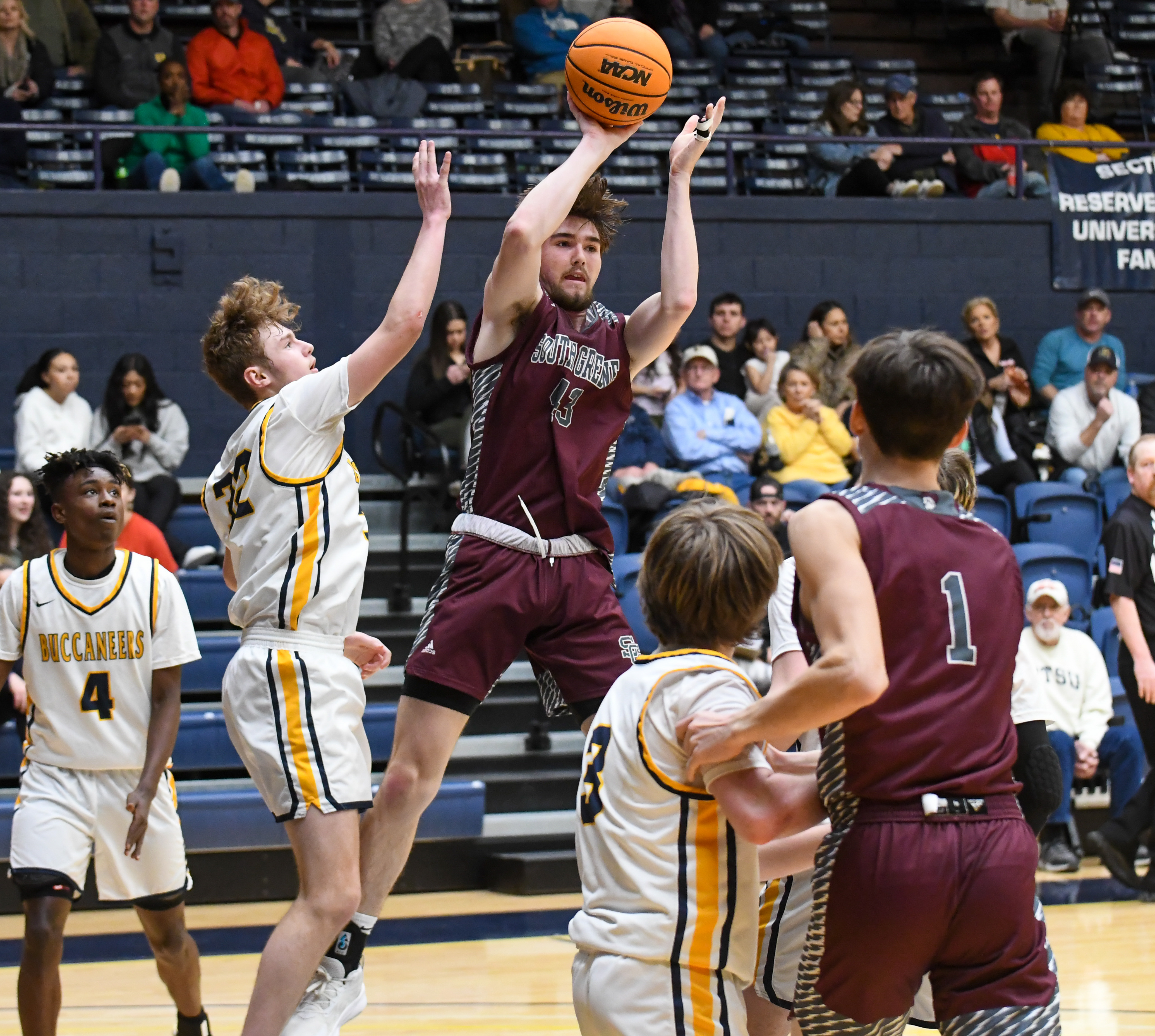 JOHNSON CITY – The South Greene boys almost let one slip away on Saturday night, but the lead they built early was too much for University High to overcome as the Rebels escaped with a 74-70 win at Brooks Gymnasium on the campus of ETSU.

The Rebels led by as many as 20 points in the first half, but the hot-shooting Buccaneers closed the gap to three points in the final minute before South Greene was able to make its final stand.

“This bunch is good and this is a quality win for us,” South Greene coach Terry Hoese said. “But I don’t know at what point this team is going to start putting games away, and that scares me. There have been several times this year that we have had big leads in the second half, and we can’t hold them. We have to figure out how to finish games.”

Saturday’s first quarter stayed tight the whole way. University took the first lead at 4-0, but Jase Roderick swung the Rebels in front with a three-pointer from deep in the right corner.

With 49 seconds left in the opening period South Greene’s T.J. Buckner scored on a putback to break a 9-9 tie. Cooper Kelley then gave the Rebels a 14-9 lead just before the quarter came to a close when he was fouled putting back a miss and turned it into three points.

Hayden Brirdwell scored the first five points of the second quarter for South Greene as part of his 11-point first half.

The Rebels inside presence made a big difference in the first half, not just scoring but giving them second chances while also limiting the Bucs to one shot on each possession.

After University High’s Andrew Cole sank a triple to close the gap to 21-14 the Rebels went on a 13-0 run that stretched their lead to 34-14.

Roderick started it with a put back and Birdwell followed by coming down the lane for a floater in front of the rim. Woody Hixson nailed a three-pointer from the corner and Roderick completed the run with a pair of charity tosses.

Cole was fouled with one second remaining in the half and put in a pair of free throws to close the gap to 34-16 at the half.

In the early portion of the second half University’s Brady Weems and South Greene’s Andrew Thornburg traded three-pointers, but then the Bucs scored seven straight points to cut the lead to 37-26.

Kelley got South Greene going again with a three-pointer, but then University’s Peter Boywewicz sank a pair of mid-range jumpers that made it 40-30.

South Greene finished the period with a 47-35 lead after Buckner put back a miss with three seconds left.

With 6:41 left to play Boywewicz knocked down a three-pointer that cut the Rebels advantage to 46-39.

Kelley gave South Greene a cushion again with six straight points, including a four-point play. The Rebels maintained a double-digit lead until the 2:08 mark when A.J. Murphy made a pair of free throws that closed the gap to 66-58.

South Greene still held a 10-point lead inside the final minute, but things began to unravel quickly. First with 31 seconds left Weems hit a jumper from the wing to close the gap to 72-64.

A quick foul followed, and Conner Marshall made one of two at the other end. Murphy brought the ball up the floor and put up an off-balance three-pointer. The shot went in and he was fouled. He made good on the four-point opportunity to pull the Bucs within five points at 73-68.

One second ran off the clock before the Bucs fouled and the Rebels missed both free chances. When University got the ball back Murphy was fouled on a three-pointer. He made two at the stripe to cut the lead to 73-70 with seven seconds left. At that point the Buccaneers ran out of time and the Rebels escaped with the win.

In Saturday’s girls contest University High was no match for South Greene as the Lady Rebels cruised to 72-16 win.

The Lady Rebels mixed up the lineup in the first half and subbed five-in, five-out every four minutes. Arianna Hoese started the night’s scoring with a jumper from the top of the key and by the midway point of the first period South Greene was in front 9-0.

Haley Susong used pair of steals to set up a pair of buckets, one for herself and the other for Jordyn Roderick. Kaydence Marshall kept the defensive pressure up and swiped the ball in the backcourt before dishing to Susong for a layup that gave South Greene a 19-1 lead after one quarter of action.

Early in the second quarter a pair of layups by Natalie Foshie pushed the lead to 26-2.

University did get buckets from Emma Chandley and Phya Lewis to make the score 30-6, but then South Greene scored the final nine points of the first half. In the closing stretch Roderick scored five points while Susong and Hailey Brooks each put in breakaway layups.

The third quarter was the only period the Lady Rebels traditional starting five played together and the result was South Greene outscoring University 26-2 in the frame.

South Greene spread the offensive attack around in the period with Roderick and Brooks each scoring six points while Hensley, Ryleigh Gregg and Kortni Bailey each scored four points.

With the clock running in the fourth quarter Bailey scored six more points. University High doubled its production in the quarter, with six of its eight points in the period coming in the final two minutes.

On defense the Lady Rebels had 23 steals and forced 34 turnovers. Susong led the way with seven steals.