South Greene Splits With Grainger On The Road 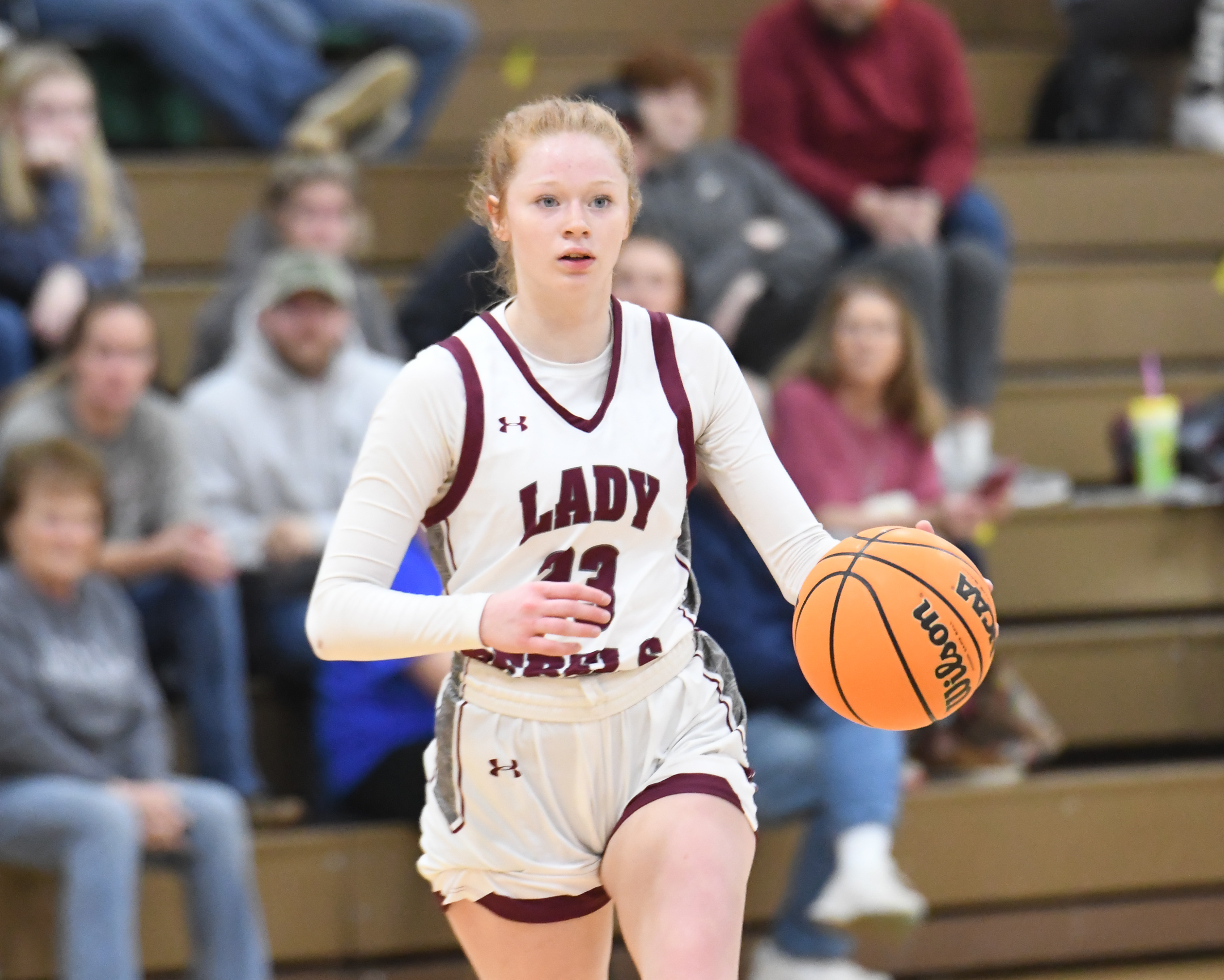 South Greene Splits With Grainger On The Road

RUTLEDGE - The South Greene girls got Friday night started with a thriller that had 28 ties or lead changes, but in the end the Lady Rebels were able to leave Grainger with a 61-54 win.

Hailey Brooks opened the scoring for the Lady Rebels with a three-pointer from the elbow for the game first tie at 3-3. Moments later Adison Hayes gave the Lady Grizzies a 9-8 lead with a rare four-point play when she hit a three from the corner and was fouled.

Brooks would score 10 of her team high 14 points in the first quarter and South Greene led 19-14 after one quarter.

Maddie Hurst cut the lead to 19-16 just seconds into the second quarter but Brooks came right back with a drive to the hoop for a layup. Jordyn Roderick sliced through the lane for a bucket that gave the Lady Rebels a four point lead at the 3:30 mark at 27-23. The Lady Grizzlies came right back to take a 28-27 lead when Alyvin Sneed sank a three from the top of the key.

The two teams were back and forth the remainder of the half until Haley Susong dropped a pair of free throws with 1.1 seconds left in the half to give the Lady Rebels the lead at 36-34.

Hurst tied the score at 36-36 as the third quarter began, then a put-back after an empty possession by the Lady Rebels gave the Lady Grizzlies the lead at 38-36.

Hurst would knock down another shot to go along with two free throws in a low scoring third quarter and Grainger took a slim one-point lead into the final quarter at 44-43.

There were five lead changes in the first three minutes of the fourth quarter until Ryleigh Gregg was fouled while shooting a three-pointer and made two of the three free tosses to give the Lady Rebels a 49-48 lead with 4:48 remaining.

Madison Hensley, who had to sit out much of the game in foul trouble, hit a triple from just left of the key to give her team a four point lead at 52-48 with 3:25 to play. South Greene was then in no hurry and decided to run a little clock before Hensley went untouched for an easy layup at the two minute mark for a 54-48 lead.

Gregg nailed a corner three to increase the lead to 57-50 with 1:16 to play. Hayes hit one of two from the line, then with 22.7 seconds she drove the lane through contact for an and-one, that closed the gap to 57-54.

Hensley would slam the door on the Lady Grizzlies, going four-of-four from the line in the waning moments as the Lady Rebels took home a 61-54 win.

South Greene coach Stephen Gregg said, "We were a little frustrated at first, we had to play without our point guard she picked up two fouls two minutes into the game.  I feel like we weathered the storm to be up two at the half. They had a lot of hustle points and that’s what Grainger County does, Then we made the free throws when it counted”.

The South Greene boys fell behind early and spent most of the night trying to dig themselves out of a hole on Friday night, and while they got close the Rebels fell 70-65 to Grainger.

A triple by Drew Branson put the Grizzlies up early then two free throws by Branson made the score 9-2 midway through the first quarter.

Jase Roderick popped a triple of his own from the elbow followed by a put-back by T.J. Buckner that brought the Rebels within two points at 9-7 with just under three minutes to go in the opening quarter.  Branson then twice drove the lane for a layup and the Grizzlies went up 15-7 at the end of the period.

Cooper Kelley opened the second quarter scoring when the southpaw dropped a triple from deep in the corner for South Greene. Branson scored on five consecutive trips on the other end of the court and the Grizzlies had a 25-12 lead before Andrew Thornburg could stop the bleeding with short jumper from the free throw line.

Kelley was mugged on a three-point attempt and sank all three free throws, Roderick hit a layup, Coner Marshall hit a nice turn around jumper in the lane just before Kelley hit a three from the corner as the half was coming to a close to cut the lead to 34-28.

Things got a closer in the third quarter as Roderick had two three-point plays the hard way for the Rebels and Kelley scored eight of his team high 23.

With 38 seconds left in the quarter Thornburg was fouled on a three-point attempt and hit all three free ones as the quarter ended with the Rebelss trailing by one at 52-51.

The Rebels trailed by as many as 12 points but were looking for a lead as the fourth quarter began. They found it when Roderick found Thornburg heading for the goal and he was fouled. The free throw was good to complete the three-point play for a 54-52 South Greene advantage.

After a couple ties and lead changes Kelley drove the lane for a layup from in front to give the Rebels a five-point lead at 63-58 with just under three minutes to play.

Branson then quickly tied the score with a three from the top of key and two free throws. Then with 1:26 to play in regulation Branson gave his team a 65-63 lead with two more from the charity stripe.

Brady Smith came up with a big steal and went in for a layup and a four-point lead with under a minute to go. Buckner cut the lead to two with a put-back with 39 seconds to go. Roderick was striped of the ball as he drove the lane with 13.5 seconds left by Smith. Smith was fouled and hit both free throws to secure the win for the Grizzlies 70-65 over a team they had lost to by 30 last month.

South Greene coach Terry Hoese said, "I’ve told them for a week if you think you’re going to beat this bunch by 30 again they were nuts…..That’s how they prepared and that’s how they played…bottom line. Thornburg played really well, he got the start tonight, he did a lot of good stuff tonight, we got a lead there in the fourth quarter and we didn’t play very well after we got the lead…Hats off to Grainger”.