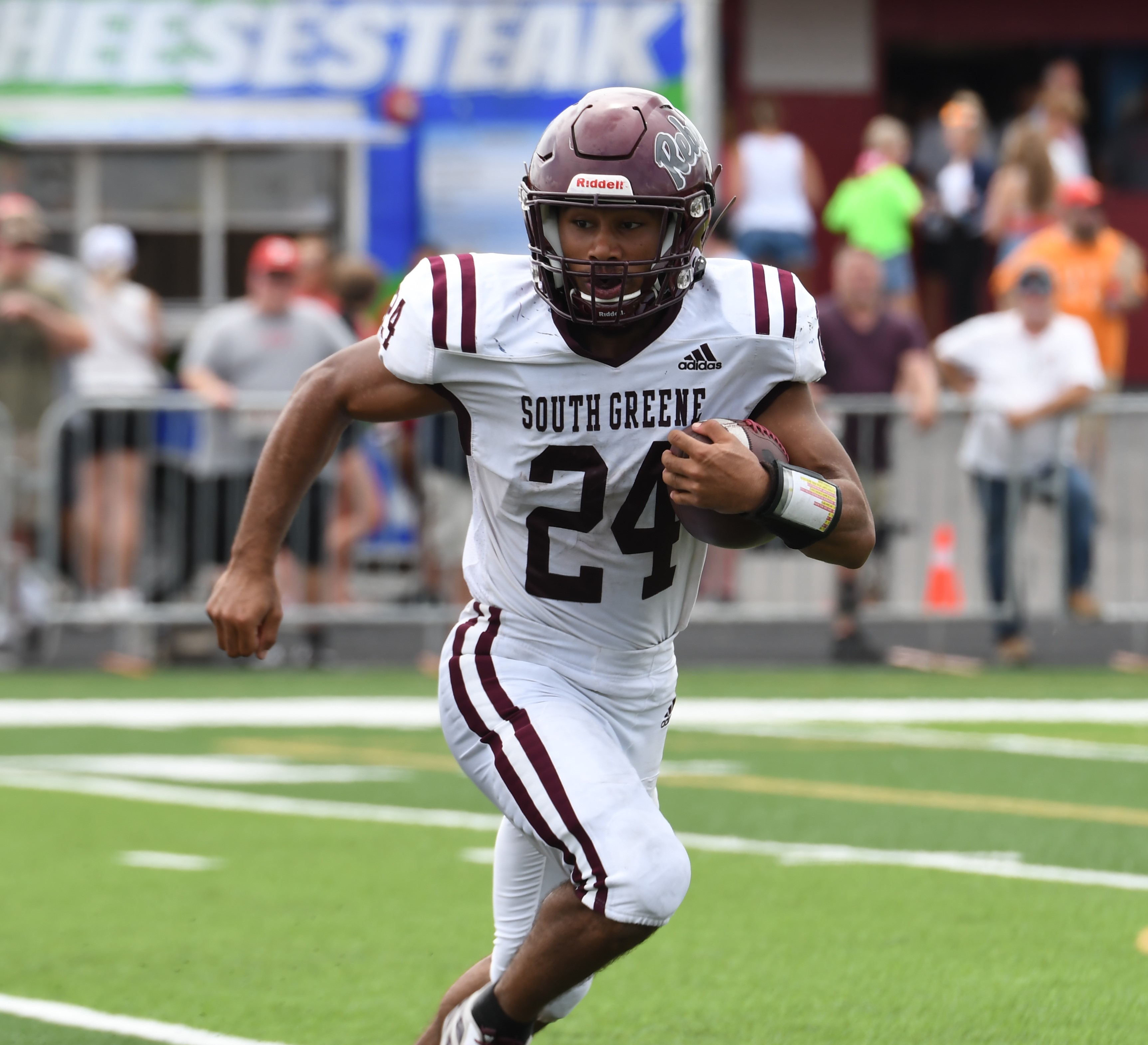 South Greene's defense marched in and pitched a shutout while the offense was hitting home runs all night long on the way to the Rebels earning a 34-0 win on the road at Happy Valley.

“Super proud of the guys tonight and the way they come out here,” South Greene Coach Jones said. “And again, once we get going and we feel like we can roll, that’s what we needed tonight with what we did.”

The win is South Greene’s first of the year and first in the Mountain East Conference.

The night started with the teams trading fruitless drives, and South Greene's second series had new life breathed into it when the Warriors muffed a punt return. The ball landed at the feet of Thomas Tesner and the senior jumped on it to give South Greene better field position for another offensive drive.

Jones’ crew had yet to score a touchdown all season but quickly checked that box off with TJ Buckner hauling in a wide-open catch to put the Rebels ahead first. The point after went through the uprights and South Greene led 7-0.

“TJ is just a great athlete. He didn’t play last year and he came back this year. Jase (Roderick) was kind of banged up this week so we told TJ he’d get a lot of reps out there. And that’s what the defense was giving us,” Coach Jones said.

On the Warriors ensuing possession Derek Miller smacked away a third down pass before the Rebels' defense forced a turnover-on-downs to win the battle.

South Greene did not have to wait long for another touchdown as Keshawn Engram took a pass from Jacob Susong 71 yards into the end zone for six points and a 13-0 lead.

Each defense would win the battle on three straight drives to hold the game scoreless for a moment.

Dion Blair made a huge tackle to stop a would-be first down for Happy Valley then shifted his way through the Warrior defense on a punt return to spark a momentum boost for South Greene.

But Jacob Susong was intercepted by Drew Blevins to end the drive. Happy Valley would come up empty on their last drive of the half to send both teams into the locker rooms with South Greene holding a 13-0 lead.

Happy Valley would receive the 2nd half kickoff and South Greene’s defense would go back to forcing punts. Derek Miller proved to be the heart of the defense with a stop at the line of scrimmage to hold Reagan Ensor short of gaining a first down.

After a South Greene punt the Warriors put together their most impressive drive of the night and push into the red zone.

Joseph Sowards powered his way to a first down as Happy Valley kept moving between the trenches to gain first downs.

They would switch it up a bit and catch South Greene off guard with a pass over the middle to Ron Paul Parker for a first.

Sowards kept pounding the rock as he shrugged off a group of tacklers on his way to the one-yard line.

The Rebel defense remained a undefeated once again with a strip at the goal line. Keshawn Engram came out of the pile with a fumble recovery at the one and handed the offense the ball back.

Derek Miller would prove to be useful on both sides of the ball with a 53-yard carry beyond midfield to get South Greene away from their own end zone.

Jones stated, “Derek Miller was huge right there on the goal line. He leads the defensive side of the ball and came to us in the preseason and said he’s ready to move the offense and we’ve been wanting that for four years. He did a great job all around.”

The Rebels offensive line sealed the edge for Engram to run around and into the end zone for six more on South Greene’s side. Susong hit Cody Rambo in stride for a two-point play and South Greene extended their lead to 21-0.

Phillip Blair then pulled off the play of the game with a touchdown on defense. The senior sprinted through the line untouched and ripped a handoff away from Ensor before going 80 yards for a tocuhdown.

“I’ve seen people knock the ball down, but we’ve never seen the defensive guy actually take the football away from him,” Jones mentioned.

The Rebels continued to wreak havoc on the defensive side by forcing another turnover. Noah Robinson picked up a fumble along the sideline after Keshawn Engram stripped the quarterback.

Freshman Nash Rader stepped in at quarterback late in the contest and scored his first touchdown of the season with a 17-yard scamper into the end zone on a read-option keep.

“Nash is just a great athlete and he’s young. Had a great play on defense on the kickoff. Made a great tackle and then came in on offense,” Jones said.

South Greene left Warrior Hill with a 34-0 win on Friday night. The Rebels start 1-0 in Region 1-2A play and improve to 1-2 on their young season.

The Range will be the host of The Milk Can Game next week between South Greene and West Greene. The Rebels have won four-straight in the rivalry and will look to continue their streak.