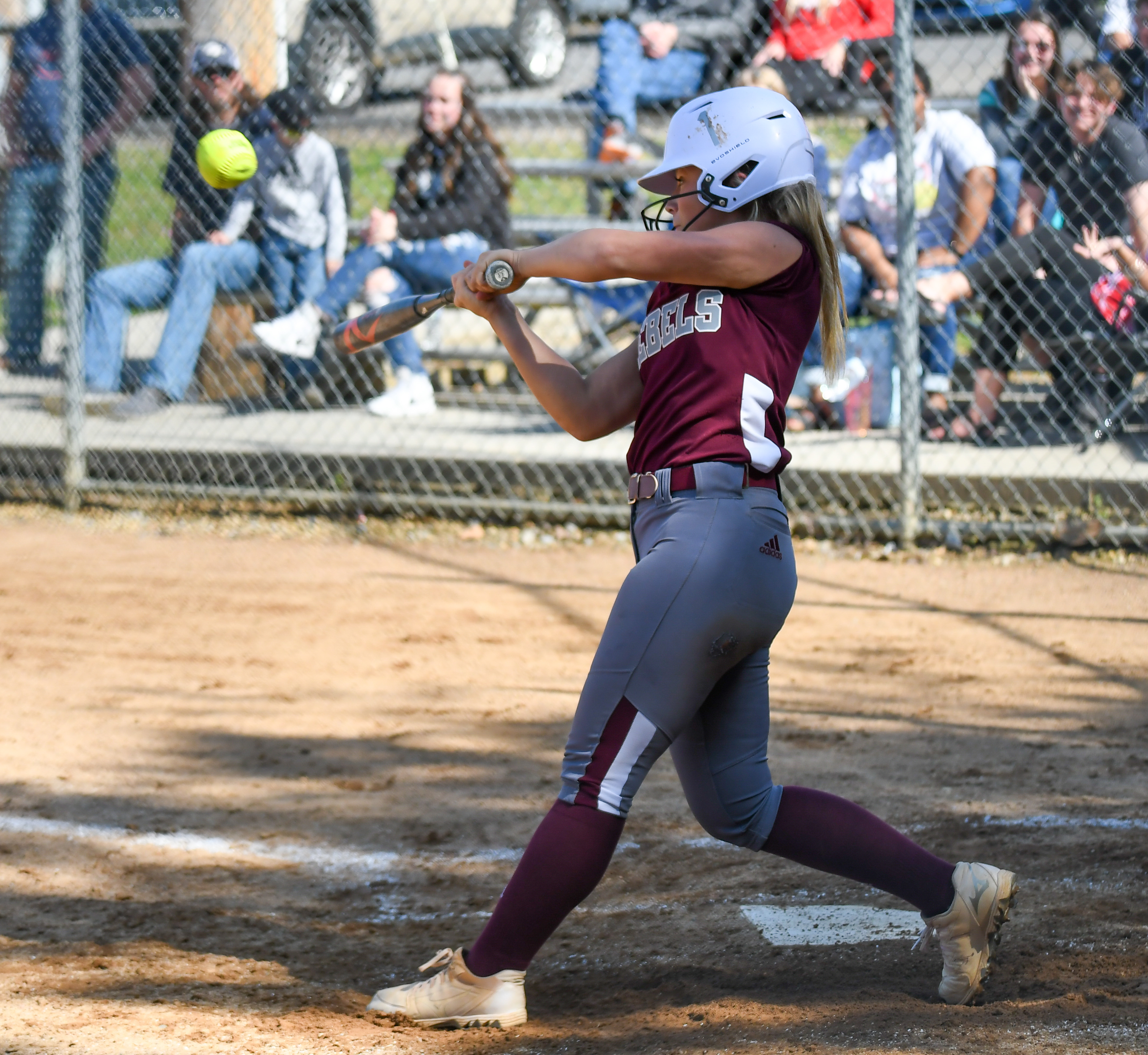 It was one of those days when her team offered at good pitches, as coach Amy Hawk’s Lady Rebels softball team made quick work of the visiting Lady Warriors from Happy Valley, taking a 13-0 run-rule game in District 1-2A Tournament semifinals.

Whitney Casteel and Lexi Miller were the catalysts for South Greene in the batters box, with Casteel going 3-for-4 on the day while scoring three times, and Miller turning in a 3-for-3 stat sheet; including two doubles, and five RBIs. The pair led the way, barreling up the softball each time at-bat, but the Lady Rebels were tough to contain as an offensive unit.

South Greene tallied 15 hits in the contest, using heads-up baserunning to advance into scoring position each time the ball was put into play. Evie Rader added two hits and three RBIs for the Lady Rebels.

Not only was Miller seeing the ball well in the box, but she was also tough to handle inside the circle for South Greene. Working a variety of pitches to her advantage, Miller was able to keep the Lady Warriors off balance, forcing many ground balls that were easily handled by the Lady Rebel infield. Miller carried a perfect game into the top of the fifth inning, when a leadoff single to left field broke up the attempt at perfection. However, she would waste no time in retiring the side, sending the Lady Rebels into the district championship game.

Casteel got the action going in the first inning, leading off with a ground-rule double to left field. She would score one pitch later on a double from Miller. Miller would later score on a fielders choice, making the score 2-0, South Greene.

Hannah Penley drew a walk just in front of Casteel, who singled to left field. The Lady Rebels would plate two more runs, when Miller added a second double to her stat line, scoring both Penley and Casteel. Sydney Gentry reached on an error at first base that would also score Miller, making the score after two innings, 5-0.

South Greene put the game away in the third inning. Katie Willett led off the inning with a seven-pitch at-bat. Willett would win the battle by drawing a walk. After a line out to third base Hannah Penley smoked a base hit up the middle, sending Willett the third. Casteel then laid down a nearly perfect bunt between the pitcher and catcher, forcing the pitcher to field the ball, but leaving no option to make the out.

Miller kept her perfect day perfect with a single to center field that scored Willett from third. Gentry drew a bases-loaded walk that went down in the book as an RBI. Evie Rader then laced a line drive to the left-center-field fence, scoring both Casteel and Miller. Anna Willett got into the hit column with a single that scored Gentry, sending Rader to third. On the next pitch Allison Penley sacrificed her at-bat with a bunt that scored Rader from third. Heading into the fourth inning, the Lady Rebels led the Lady Warriors, 12-0.

There weren’t many fireworks in the fourth and final at-bat for South Greene, as Hannah Penley reached base on a single to lead things off. Casteel moved her over to third base on a fielders choice. Miller added her final RBI for the contest, hitting a sacrifice fly to deep center field. The score through four innings was 13-0. The Lady Rebels made short work of the comeback attempt in the top of the fifth, closing out a shutout performance for South Greene.

The Lady Rebels will play Thursday against Johnson County at home at 5:30 for the district title. South Greene also clinches a berth in next week's Region 1-2A Tournament.