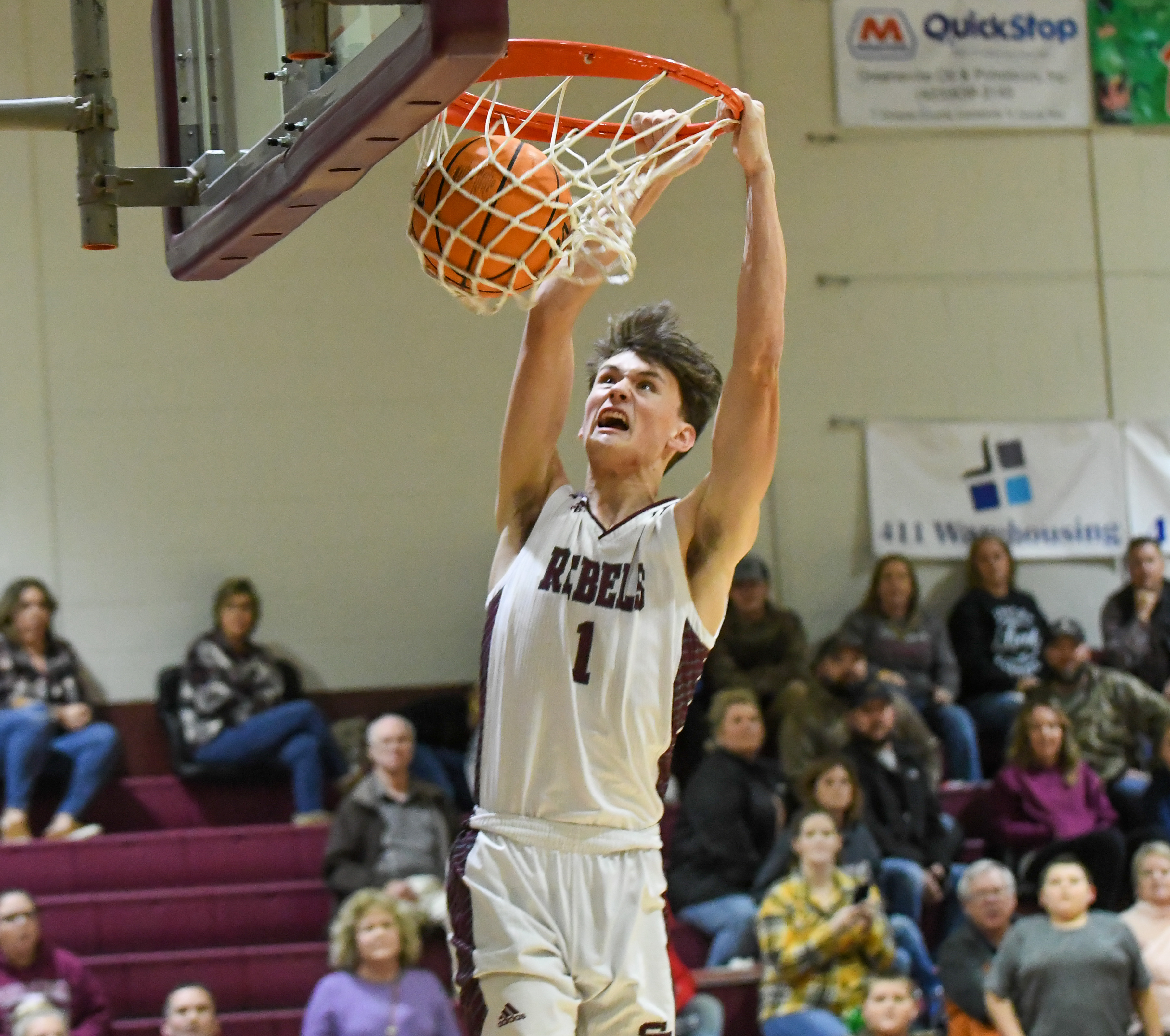 The South Greene boys watched a double-digit lead slip away in the first half on Friday night, but they found new life in the second half to earn a 60-46 win over Johnson County to stay perfect in District 1-2A play.

“This is a good win for us,” South Greene coach Terry Hoese said. “I knew Johnson County was good, and I knew they would be ready to play. They play hard, they have kids that can shoot, and they have a man in the post. But our kids did a really good job in the second half, especially defensively. I think they knew they blew it in the first half, but we got back ponding the ball down low and hitting cutters in the second half. I’m tickled to death with this one.”

The Rebels protected their home floor to improve to 3-0 in district play which sets up a showdown on Tuesday at Chuckey-Doak for first-place in the league half-way through the schedule.

“If you want a chance to win this thing you can’t afford to give away games at home,” Hoese said. “I don’t see Chuckey-Doak losing very many, and I don’t see this bunch losing very many. It’s going to be a tight race, and we have to keep winning to have a shot to be there at the end.”

South Greene led by as many as 12 points in the first half, but fell behind 29-26 going into halftime.

It did not waste much time getting the lead back with Conner Marshall tying the game at 30-30 before Jase Roderick pulled up for a jumper from the block that put the Rebels on top 32-30.

The Longhorns came back and took a 34-32 lead when Eli Dickens laid one off the glass.

With 3:06 left in the third quarter T.J. Buckner stole possession at half court and charged ahead for a two-handed slam that seemed to lift the spirits of everyone on the Rebels’ roster. They went in front 36-34 and never trailed again.

“That play was huge, and it felt like it got the whole thing going,” Hoese said. “T.J. can get out of the gym, and it sparked us right there. I hate that it takes that to get us going, but that was a good kickstart in the second half.”

Cooper Kelley got the fourth quarter started with a triple for South Greene before Andrew Thornburg went up and under the rim to put the Rebels on top 48-41.

Buckner made it a double-digit lead with 3:45 left when he sank a three-pointer from the corner for a 53-41 advantage.

The shot was part of a 13-0 run in which Buckner scored five points and Thornburg scored four points. The Rebels biggest lead of the night came at 58-41.

“Andrew Thornburg came in and he didn’t completely shut that kid down, but he made it tough on that kid. To me that was difference in the basketball game, his defense in the second half was the difference,” Hoese said.

Friday’s action started with South Greene scoring the first six points of the contest, Hayden Birdwell scored five of them.

After three-pointers from Graham Reece and Skyler Lawson the Longhorns closed the gap to 12-10.

Roderick started the second quarter by scoring on an inbound play and with 6:11 left in the first half Kelley hit from behind the arc to put the Rebels in front 22-10.

Simcox followed with four points in a 30-second span and then Dickens and Reece each from deep to cut South Greene’s lead to 22-20. Simcox tied the game with 3:39 left in the first half when he scored from the block.

After the Rebels watched a handful of three-pointers clang off the iron Marshall drove the lane to give the lead back to South Greene briefly, but the half ended with Austin West and Dickens sinking triples to put Johnson County on top 29-26 at the break.

On Tuesday in a lopsided with over Happy Valley the South Greene girls fired in 14 three-pointers. On Friday the Lady Rebels never hit from deep, but the result was still the same as South Greene collected an 80-29 blowout win over Johnson County.

“This was a fun game. We were able to get out and run and score a lot of points early,” South Greene coach Stephen Gregg said. “Everybody had the opportunity to score, and that is the kind night a team needs sometimes. A big conference win is always good. It’s mind boggling that we can miss all of our threes and still have this kind of offensive night. I guess you take what you can get, but we are going to put a product on the floor that is going to play hard.”

The Lady Rebels played fast on Friday, with several possessions that took less than 10 seconds and the result was five players finishing in double figures.

Haley Susong ran the floor more than anybody else and led South Greene with 18 points, five assists and five steals.

“Haley had it figured out tonight, she was separating over the top,” Gregg said. “It just seemed like her side kept getting funneled up the floor, and it was good to see her finish.”

“I felt like the girls were moving the ball, sharing the ball, and making the extra passes,” Gregg said. “Tonight it was run and gun for the most part and the girls did a good job of getting up and down the floor.”

Johnson County held a brief 5-4 lead on Friday, but the Lady Rebels took control with 20 consecutive points. Most of the points came in transition as the Lady Rebels forced turnovers and quickly got moving in the other direction. Roderick scored six in the run, Brooks had five and Susong had five.

The Lady Rebels started the second quarter on a 13-2 run as the lead grew to 42-11. Gregg led the way with six points in the run, and scored the only points outside the paint in the stretch. Susong added a pair of transition baskets.

Things did not slow down in the second half and Brooks got things started by taking a steal the length of the floor for a lay in. She followed that with a jumper from the left side and then found Roderick cutting through the lane for a layup.

The Lady Rebels’ lead reached 40 points with 2:23 left in the quarter when Susong swiped the ball on the far end of the floor and went the other way for a breakaway layup.

Hoese and Roderick also scored on steals in the final minute of the third period as South Greene’s lead grew to 69-22.

Kortni Bailey drove to the rim 33 seconds into the fourth quarter to push South Greene’s lead to 72-22.

Gregg scored six points in the quarter for South Greene while Johnson County got three-pointers from Peyton Gentry and Aubrie Baird.