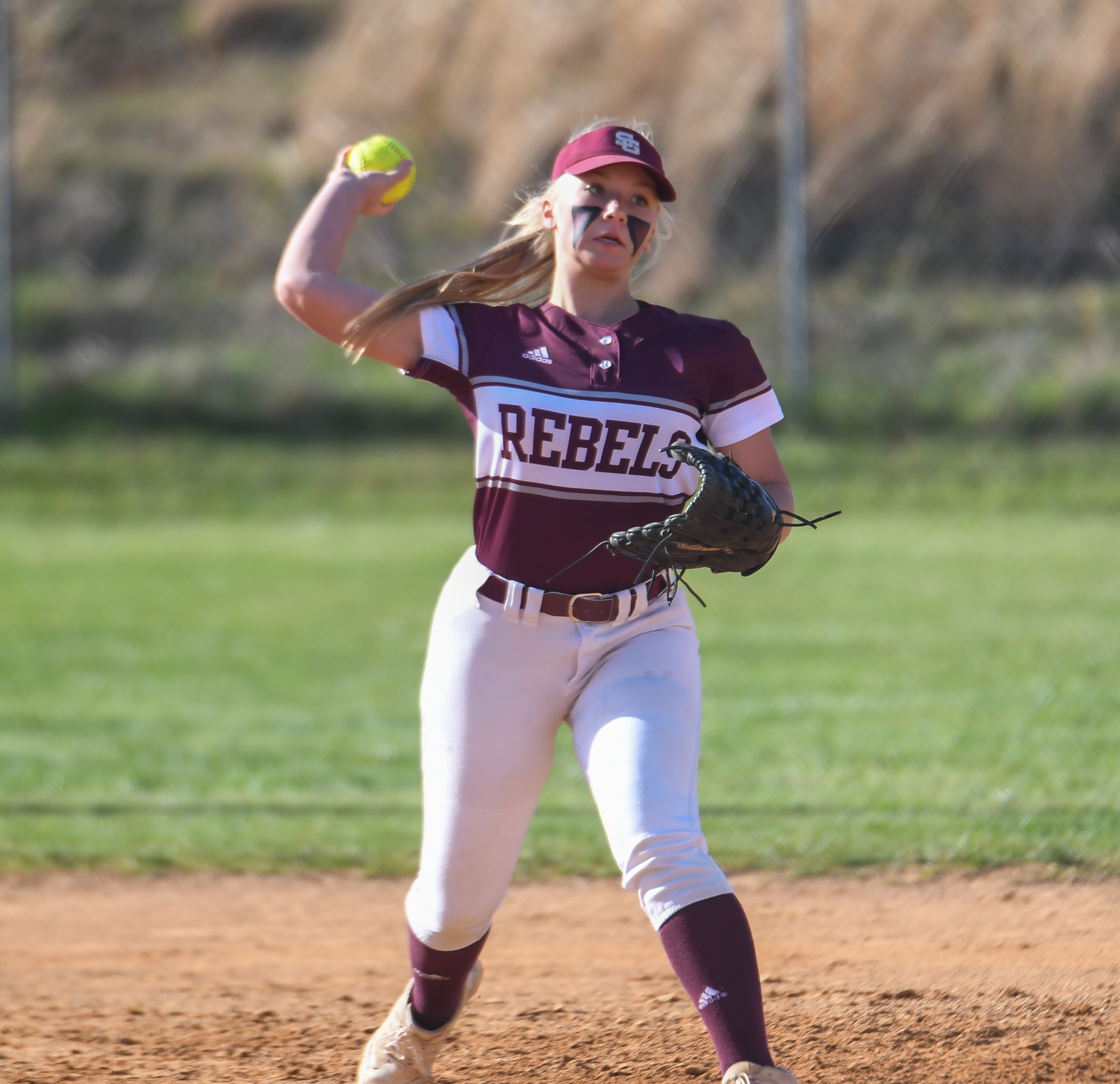 On a quite unusual Wednesday afternoon, South Greene pushed out to an early lead and never looked back en route to taking sole possession of first place in District 1-2A with a 10-3 win over Chuckey-Doak.

The action started over an late after a scheduling miscommunication with the umpires, but after both teams went through warm ups again things got underway on a sunny Wednesday afternoon.

South Greene Whitney Casteel got the game started with a leadoff hit into left field and Lexi Miller followed in suit to put two runners on with no outs.

Evie Rader faked a bunt and tried to catch the Lady Knights off guard but Hayleigh Taylor fired a throw to Bre Roberts on the run and she was able to tag Casteel out at trying to steal third.

Lexi Miller and Madison Hensley capitalized on Chuckey-Doak’s mistakes and scored on the base paths after two throwing miscues from the Lady Knights.

In the bottom of the inning Taylor worked the count and drew a walk in the leadoff hole, but eventually was tagged out at secondbase on an attempted double play by Amelia Mullins.

Bre Roberts pulled a hit into left field for a double and sent Ramsey to third base but she didn’t get the opportunity to reach home plate as Sydney Shipley grounded out to end the inning.

In the second inning Makayla Ramsey quickly produced two outs in the circle before Whitney Casteel stepped back in the box to deliver another hit. Lexi Miller turned one swing of the bat into two bags and pushed Casteel to third, but both runners would be left stranded after Ramsey ended the inning with a strikeout of Rader.

Anna Willett fired a laser up the middle of the infield to lead off the third with a single. Amelia Mullins stayed disciplined at the plate and took four balls for a walk.

Chuckey-Doak’s errors caused them to dig a deeper hole on the scoreboard after a throw to first base dropped through the legs of Maura Phillips and rolled all the way to the fence.

Willett and  Mullins came running around third to steal two runs that put the Lady Rebels ahead 4-0.

Madison Malone dropped a ball into shallow left field for a hit to begin the bottom of the third inning. Malone came across the plate as Chuckey-Doak’s first run after Ramsey’s double drove her home from second.

Shipley pulled the Lady Black Knights within one run with a bases clearing single that pushed Taylor and Ramsey across the plate to pull the score to 4-3.

South Greene felt the pressure and responded in the best way possible by shutting down Chuckey-Doak at the plate and allowing zero runs for the rest of the contest.

The Lady Rebels dugout was alive and well and didn’t let a surge from Chuckey-Doak’s offense kill their confidence.

“Vanessa (Gallihar), one of our assistants, does a great job about encouraging the girls to stay up and the girls are very responsive to that,” South Greene coach Amy Hawk said. “I thought the last couple of games they’ve kept us up. Even when we could’ve gotten down, they tried to keep us up.”

Miller was a key part of the Lady Rebels success. She produced three hits at the plate and earned the win in the circle to lead her team to the top of the District 1-2A standings.

“We haven’t been in this position since about my freshman year, so it feels good to be back on top,” Miller mentioned.

Coach Amy Hawk was impressed with the way her senior performed in her standout performance. “Lexi pitched well. She was hitting her spots especially her curveball and change-up,” Coach Hawk mentioned. “But the defense was behind her too.”

Casteel and Miller earned spots on first and second after a single by Casteel and a walk by Miller. Evie Rader sent a scorching ground ball by the glove of Maura Phillips for an RBI-double. Casteel’s aggressive base running put a run on the board for South Greene and gave Miller and Rader space to move over into scoring position.

“Whitney played a very solid game,” Coach Hawk stated. “Those first three were line drives, I mean they were shots.”

The Lady Rebels would end the top half of the fourth by extending the lead to 6-3.

Mullins hopped on base in the leadoff spot to start the fifth inning and used a softly hit grounder by Kaylee Whitson to run all the way home to score and push the Lady Rebels' lead to 7-3.

The top of the order for South Greene would continue to dominate with Rader pounding a hard-hit ball into fair play and setting up Lexi Miller at third base. Madison Hensley would step in as a pinch runner for Rader. Miller and Hensley would put up two more runs for South Greene in the sixth inning with Miller crossing the plate on a passed ball and Hensley jogging home on a ground ball hit by Anna Willett.

Alli Penley would stay alert on the base paths and use the Lady Knight’s mistakes to her advantage to score on a throwing error.

South Greene would cruise off with a 10-3 win over Chuckey-Doak. South Greene achieves sole first place atop the conference standings with one loss in conference play.