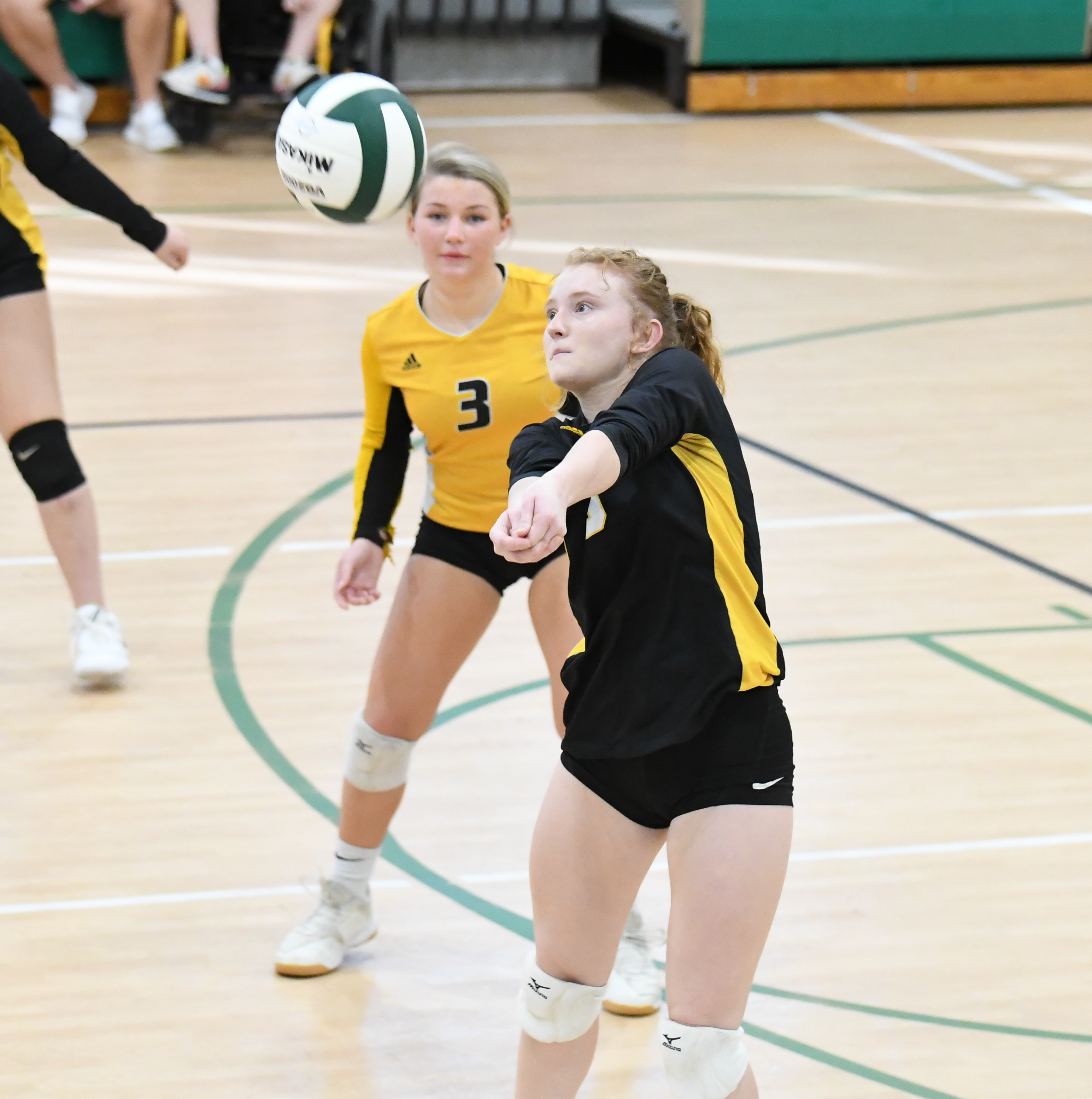 Chuckey-Doak defended home territory on Tuesday and picked up a victory over the North Greene Lady Huskies (25-19, 25-16, 19-25, 25-15) on senior night. A dominant showing by the Lady Knights saw both senior leaders put on a great showing for the last time on their home hardwood.

Chuckey-Doak honored two seniors, Heidi Buch and Bailey Fair, for their hard work and dedication towards the program’s success and they showed quickly just how valuable they are.

Buch started her senior night offensively with a kill to put Chuckey-Doak back on top. Fair then tipped a ball over the net for their next point to take a 4-2 lead. Another kill by Fair broke a 4-4 tie and put her team back ahead.

Two straight aces on the back line by Brianna Lowe further extended the Lady Knights' lead.

Matti Phillips served up an ace on North Greene’s side to put them back in the ball game.

Faith Yokley provided two kills on offense for Chuckey-Doak that sparked a run for the Lady Knights. Buch added another kill and an ace to lift the lead to 12-7.

McKinlee Weems was dominant on the front line with a tip kill and a block to add two quick points on back-to-back volleys. Hayleigh Hensley used her height to add to her team’s advantage and stuffed a shot over the net.

Two straight aces by Weems brought North Greene within a point of the lead and forced Chuckey-Doak to call a timeout with the score at 16-15.

After the break the score was knotted at 16-16, the Lady Knights worked their way back and grew a slight lead on the back of a spike from Buch and an ace from Fair.

Both seniors helped lead Chuckey-Doak to a 25-19 win in the first set.

North Greene landed the first point on the board in the second set, but Chuckey-Doak rattled off a four-point stretch that saw them assume control of the lead.

Kendra Key contributed with a spike early and landed an ace once she stepped up to serve. Fair sent a spike crashing to the floor that wouldn’t be returned.

Gracie Johnson and Weems landed a pair of kills in bounds to produce some scoring opportunities for the Lady Huskies. Phillips delivered an ace in service shortly after.

Buch put Chuckey-Doak ahead 11-6 following an ace and a powerful spike. The lead would soon grow to 15-7 before a timeout was called on North Greene’s sideline.

Out of the timeout, Johnson powered down four kills in the second half of the set, but couldn’t pull together a run to catch up with the lead. Chuckey-Doak would take the second set 25-16.

North Greene’s hot streak in the second set carried over into the third with a win but didn’t come easily.

Buch’s kill gave Chuckey-Doak an early 4-1 lead right out of the gate. The Lady Huskies rallied back with a kill and block from Johnson to tie the score at 4-4. Lauren Keffer rose up to block two balls at the net to push them into the lead. They held an 8-5 lead before Chuckey-Doak called an early timeout.

Rhiley Henry got the scoring going again with a tip over the net. Grace Buchanan pulled an ace out of the deck from the service line to extend the lead. Henry’s ace later in the set forced Chuckey-Doak to call another timeout while trailing 17-12. Another ace would follow immediately after and carry North Greene to a win in the third set 25-19.

Chuckey-Doak’s confidence never wavered and it came battling back in the fourth set to close the deal.

Fair, Key, and Hensley each added a kill to push the Lady Knights to an early 4-0 lead.

Buch and Hensley provided another kill each while Fair racked up a pair on back-to-back volleys as the Lady Knights stormed out to an 11-3 lead.

The senior duo of Buch and Fair balled out on senior night and continued pounding to ball into the hardwood. Buch notched another kill on the night while Fair added two-straight aces to force North Greene into another timeout. The lead would suddenly grow to a wide 16-5 margin.

Fair’s performance from the service line was a huge contributor in Chuckey-Doak’s victory. Two more aces after the timeout began to spell the end for the Lady Huskies.

Loren Blevins broke the scoreless spell for North Greene with a tip over the net. Hannah Miller provided a kill from an assist off Mercy Buchanan.

The Lady Knights travel to Morristown East on Thursday afternoon for their next contest. North Greene will visit Hampton next Tuesday (Oct. 4) for a matchup with the Lady Bulldogs.