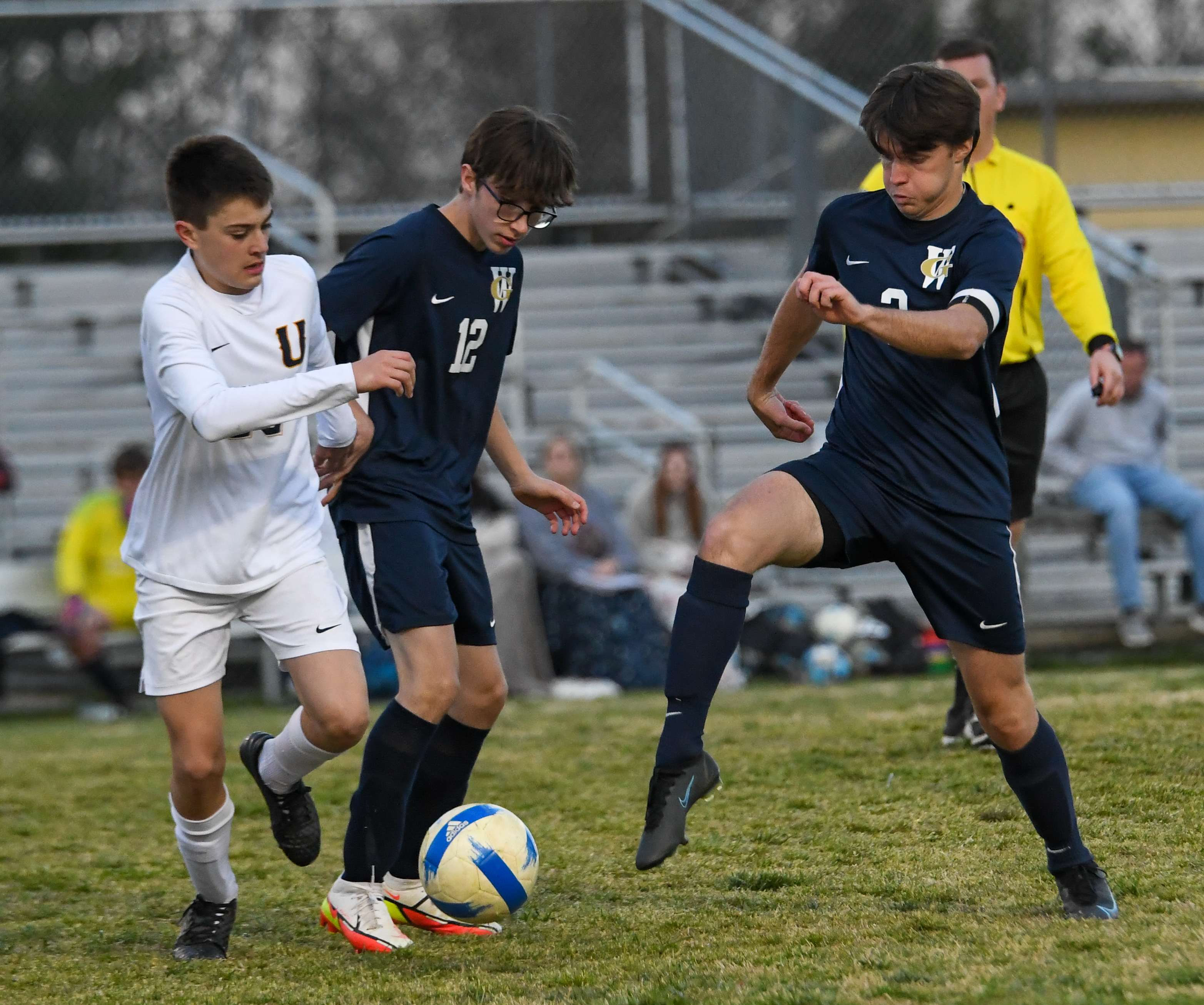 The West Greene soccer team took the second half by storm and prevailed 2-1 over University High on Tuesday afternoon. The Buffaloes erased a 1-0 halftime deficit to pull from behind and defeat the Junior Bucs with goals from Daniel Cicero and Blair Shelton.

“I was really proud of that second half effort,” Buffaloes Coach Logan Minnick said. “And you saw in the second half, we just wanted it. We have discussions all the time about how we have to want it, and we came out there and we did. You see the result.”

With the win West Greene splits the season series with University High and pulls itself back into the race for the top seed in the District 1-A Tournament.

University high came out hot from the opening whistle as the Junior Bucs took the early advantage and climbed on top 1-0 in the first half.

The Buffaloes never showed any quit in their performance and started slowly working towards gaining the momentum back. West Greene’s Joseph Rojas dribbled around in the box and almost got a shot off before being shut down by UH’s defense. Blair Shelton’s header was won by Joshi Haase on a 50/50 ball but the possession was turned the other way once Haase was called for a foul.

Haase had another opportunity late in the first half with three minutes remaining but Tyler Beaver deflected the kick and saved a possession in the box.

The Buffaloes would trail 1-0 after 40 minutes played.

Haase continued being aggressive in the second minute of the new half and broke free inside the box but didn’t get the right angle on his shot as it rolled out of bounds.

“He uses his body so well and his footwork for a basketball player is really good,” Minnick stated. “We love to see him get 80 minutes out there.”

Cicero set up a perfect opportunity for West Greene to put pressure on the Junior Bucs. Cicero lofted a beautiful free kick into the box from midfield that was received by Haase. Shelton received the next pass and put a strong right foot on a shot that was blocked at the goal.

The Buffs followed that up and sent Shelton to the corner to deliver a pass into the box to Cicero that was drilled and sent streaking into the back of the net for a momentum changing goal for West Greene in the 46th minute.

“That’s what he does so well, right place at the right time,” Coach Minnick mentioned. “He uses that body to his advantage and got on the end of that corner.”

Trey Meredith attempted to lift the Junior Bucs spirits with a shot in the 52nd minute but couldn’t put his team back on top.

Jacob Winfield came sprinting in on the backside of a pass from Abel Pate and almost caught everyone off guard sneaking in from behind. Hunter Gregg was on high alert and saw the striker lurking to make the save at the goal line.

In the 63rd minute, Shelton fought through traffic and pin-balled in between defenders before finding daylight and sending a dart into the goal to put West Greene on top 2-1. The goal would end up being the difference maker in the end and seal the Buff’s comeback.

“He’s such a good leader. He’s grown into that role every single year he’s been at West Greene and you can see that in his senior year,” Minnick spoke highly of Shelton, his senior captain. “He directs traffic out there and got that big goal for us and that was the difference.”

University High had a direct kick opportunity just a few feet outside the penalty box, but the possession would be fruitless as the kick wouldn’t result in any points and be their last threat to score.

West Greene would gain a huge district win after their come-from-behind performance against UH. The Buffaloes travel to Volunteer for a matchup on the pitch Thursday night. They then turn their attention to a pivotal two-game series against conference foe Chuckey-Doak.