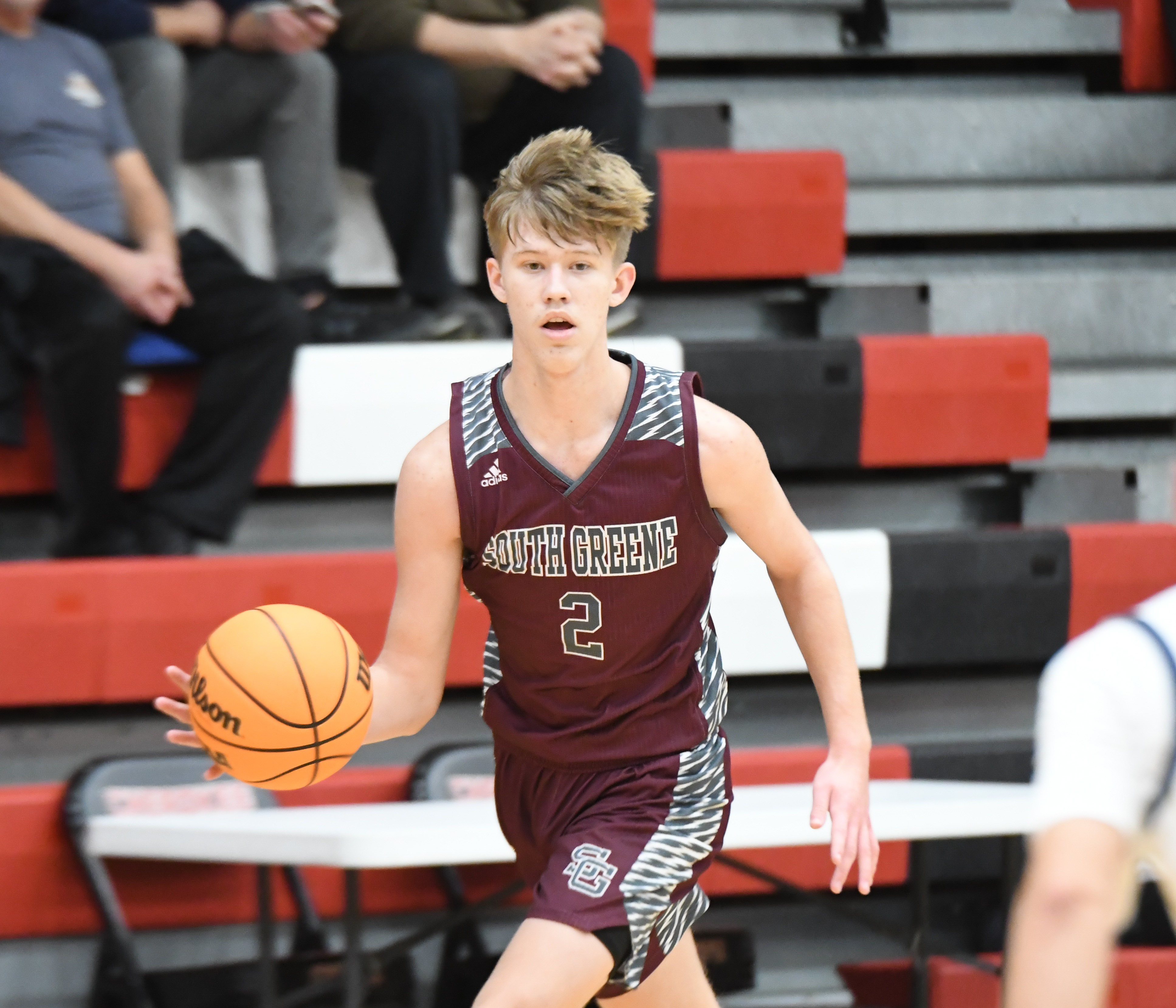 In one of the wildest games of the year, South Greene held off a furious comeback by Chuckey-Doak to earn a 67-65 victory in a thrilling finish.

In a game that many doubted the Rebels' chances coming in they proved the doubters wrong and made a statement by knocking off the No.3 ranked team in the state to stake their claim as the top team in District 1-2A.

“I know most people expected us to get beat tonight,” South Greene Head Coach Terry Hoese said. “I don’t count this as a surprise. I’m very happy for our kids. We have to make sure now we don’t have a let down and let somebody else beat us.”

South Greene’s hero Jase Roderick was the one to put the Black Knights away on a layup with 2.1 seconds on the clock that ultimately sealed the deal.

“I saw TJ in the outlet lane and I’m thinking get the ball up the court and go score. I get it out to TJ and I cut right to the bucket and he sees me perfectly and I hit my layup. Coach has a lot of trust in us and that’s what set us up,” Roderick stated.

South Greene completed the sweep on Tuesday night to now take the top spot in the conference in both boys and girls with both teams still remaining unbeaten at 4-0.

Chuckey-Doak falls to 3-1 after the loss.

“They’re ranked third in the state for a reason. They were 17-2. They put up 90 points in several games and just punish teams,” Hoese said.

The Black Knights started hot on offense per usual with a layup from Christian Derry and a mid-range jumper from Cadin Tullock.

Conner Marshall got the Rebels on the board and Roderick’s three-point swing pulled them ahead 5-4 halfway through the first quarter, and they never trailed after that. Roderick made the first of two free throws but the Rebels found a way to put extra points on the board as Buckner grabbed the rebound and Roderick finished the play with a wide-open lay in on the baseline.

Hayden Birdwell and Derry traded buckets in the post on back-to-back trips down the floor.

Brock Rush came up big on the defensive end with a block on Marshall’s shot that put more life into the Knights. Cadin Tullock got a three-pointer to fall to pull them back within one possession.

South Greene held a slim 12-9 lead after the first quarter.

To start the second quarter Birdwell stepped out behind the three-point line and expanded his range with a triple. Derry responded well with a three-point bomb of his own to keep South Greene within a close distance. Derry scored a layup in the post with a foul added on and set the crowd on fire with an intense yell before completing the three-point play at the free throw line.

Andrew Thornburg dribbled along the baseline and sank a baseline floater. Cooper Kelley dialed up a three-point basket from long range to put the Rebels ahead 23-14.

Chuckey-Doak sent a half-court trap at Jase Roderick, but it didn’t go as planned for them when Roderick fired a pass to Birdwell along the baseline that resulted in a layup. Birdwell would come up huge later in the quarter by grabbing Roderick’s miss on a one-and-one attempt and putting it back off the glass to give the Rebels a 13-point lead.

Tullock launched a three-pointer through the net before the half ended, but Chuckey-Doak trailed South Greene 32-22 heading into the intermission.

Isaiah Treadway found success in the mid-range and got a bucket to fall through the net to start the second half for Chuckey-Doak.

Buckner and Birdwell used the glass to their advantage as each added a layup. The Rebels would start to gain all the momentum with an and-one from Roderick and a three-pointer from Hunter Toth that shot them ahead 46-30.

Chuckey-Doak would chip away at their large deficit starting with a layup by Treadway. Buckner came down with a rebound, but Treadway was able to rip it out of his hands and put it back off the glass for another layup. Derry soared through the air for an offensive rebound and notched an easy layup. Tullock then ended the third quarter the same way he ended the second with another three-point bomb.

Chuckey-Doak had managed to cut the lead to 50-39 heading into the fourth quarter.

Both teams traded buckets through the early stages of the fourth quarter. Andrew Thornburg tipped a pass on the perimeter and took it all the way home for a layup. Treadway got a tough off-balanced shot to fall in the lane. Birdwell drained a jumper right outside the paint.

Shelton splashed a three-pointer in the corner and Treadway cut it back to ten points with a layup feed from Tullock.

Buckner’s offensive put back with 4:00 left bumped the score up to 60-48. A timeout was called and this would be the moment Chuckey-Doak began its comeback attempt.

Derry scored an easy two points at the rim. Treadway put the crowd on their feet with back-to-back and-one layups to cut it to four points. After a steal Tullock found Derry inside for two points. Treadway couldn’t miss in the paint and scored his third layup of the run to cap off a 12-0 push that tied the game at 60-60.

South Greene regained the lead on three made free throws.

Shelton cut it back down to one point at 63-62 with a layup.

Marshall made two free throws at the line to give South Greene some breathing room. This is where all the late-game drama began to start. The Rebels thought they’d have more breathing room when Derry missed the front end of a one-and-one. But after making two at the line before, Marshall missed his next two free throw attempts to leave the door open for the Black Knights.

Derry made up for the missed one-and-one by getting fouled and sinking his next attempt at the line. The next free throw would bounce off the rim and go right into Cadin Tullock’s hands. His quick instincts led to a layup off the glass that tied the score at 65-65 with less than 20 seconds on the clock.

Coach Hoese decided to let the game play out how it may without calling a timeout. His trust in his team paid off with great teamwork from TJ Buckner and Jase Roderick. Once Roderick took the ball up the floor, he passed it off to Buckner and cut to the basket. Buckner relayed a perfect bounce pass to Roderick on a great cut through the lane. The sophomore finished through contact at the rim to put the Rebels ahead by two points with 2.1 seconds left on the clock.

“I just told them to push and attack. Jase hit TJ in the corner and TJ came up with a big pass. Jase went and cut in the middle like he’s supposed to and did what he’s asked to do when he passes the ball. For him to go up against Derry right there and finish that shot off he made the one that counted the most,” Hoese expressed.

After two timeouts, Isaiah Treadway got off a clean look from three but it wouldn’t fall.

South Greene held on in the end in a thrilling finish that saw them take home a 67-65 win over Chuckey-Doak.

“They’re good. It’s a good win for us and I’m proud of my boys,” Coach Hoese stated.

Isaiah Treadway went scoreless in the first half but ended up leading Chuckey-Doak with 22 points. Christian Derry piled in 20 points while Cadin Tullock contributed with 12 points.

South Greene hits the road for the second game in their season series against Grainger on Friday night. Chuckey-Doak will stay out for another conference matchup at home against the West Greene Buffaloes.