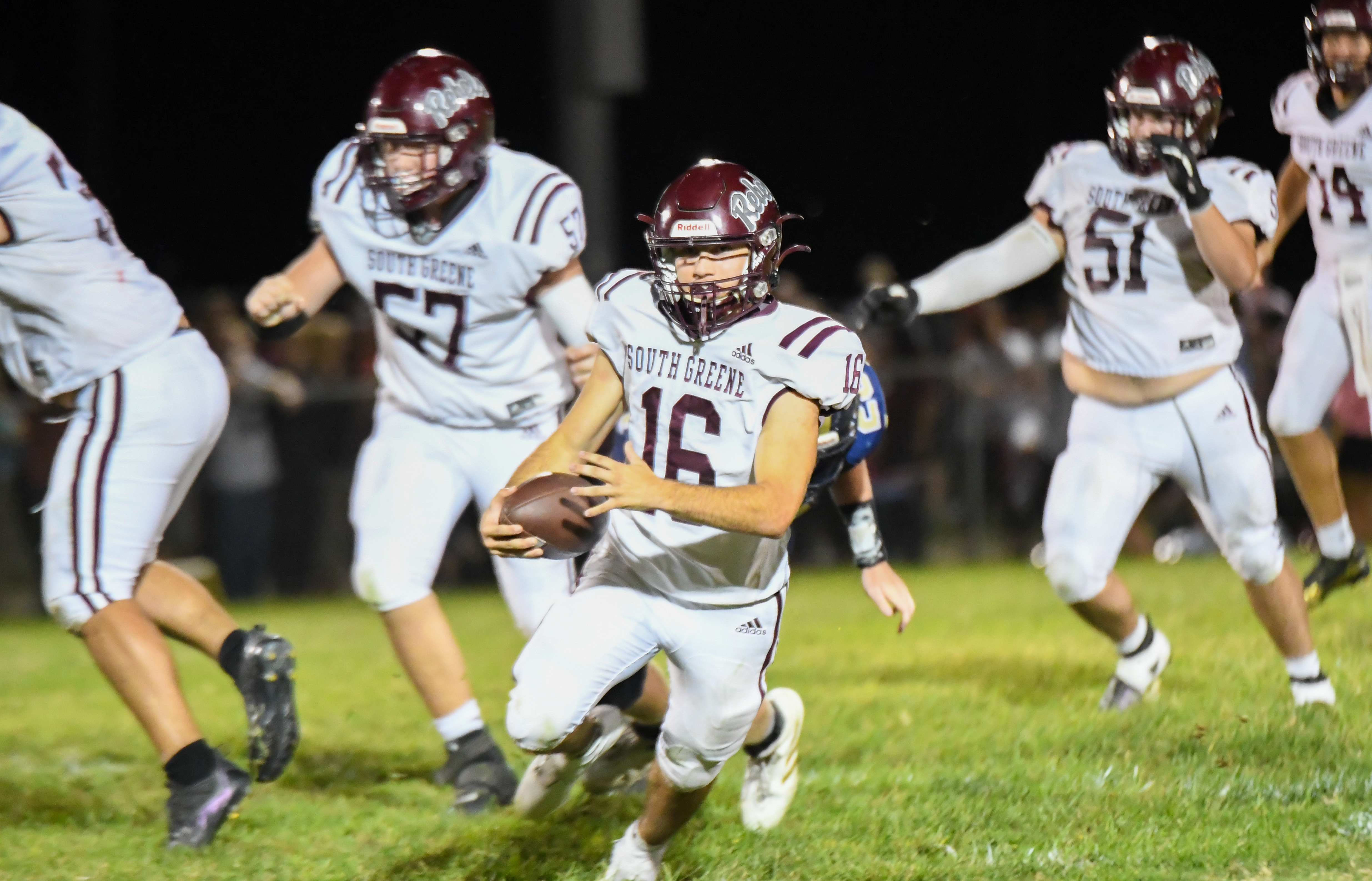 The South Greene Rebels moved to 2-0 in the Region 1-2A play with a 35-18 win over Cumberland Gap on Rebel Hill on Friday night. You could tell by the look on Coach Shawn Jones’ face he was proud of his team’s effort in “a big win and first round playoff game”.

In the four team Region 1-2A South Greene was guaranteed a playoff spot before the season started, but after Friday's win they have likely secured home game in the first round of the playoffs. A three-way tie for first place would be the only scenario where the Rebels could end up end up traveling in round one, if the tiebreakers broke against them.

The visiting Panthers took the opening kickoff and moved down the field with their miss direction and odd looking formation. The Panthers nine play drive consumed six minutes and covered 66 yard before the Reb defense stiffened and turned them away without points.

The Rebels, wearing their new Smokey Gray uniforms, went on a long 81-yard drive that took 6:39 off the clock before ending with a 30-yard touchdown pass from Jacob Susong to Thomas Tesner. The Rebs elected for the two-point conversion that was short and the score was 6-0 early in the second quarter.

After the kickoff the Reb defense stiffened again forcing a three and out, Brayden Painter was back to punt and Hunter Burkey came free up the middle and it looked to be a sure punt block but Painter somehow managed to avoid Burkey and got off a 37 yard punt.

Two plays into the ensuing drive Keshawn Engram went for 59 yards and a touchdown and this time the 2-point conversion was good when Susong hit Noah Robinson in the end zone and the score was 14-0 with 7:52 showing on the clock in the second quarter.

Cumberland Gap had the ball in good field position after the kickoff at the Reb 45-yard line. Isaiah Daniels came free out of the scrum and raced to the south Greene two yard line. Then Kyle Figeroa took it in from there, the two-point conversion was no good, but the Panther were on the board at 14-6 with 7:12 left in the half.

After South Greene's defense pounced on a fumble Susong hit Conner Race for a 10-yard gain and Engram ran for 10 more yards down to the 10-yard line. Race then raced up the middle for the touchdown. The Rebels' kicker freshman Brant Wilhoit kicked the extra point for a 21-6 lead with 1:44 before left halftime.

The Panthers don’t kickoff with a tee and squibed another kick down field that the Rebels were able to handle at the 39 yard line. After two plays for no gain Race took a swing pass 61 yards to the house.

Race said after the game “I took the pass in the flat, there were two guys on the edge and saw the gap and just took it to the house”.

Wilhoit nailed the extra point and the score was quickly 28-6.

With a 22-point lead it looked like the Rebels were on cruise control until Brayden Painter stepped in front of a Susong pass and took it 30 yards for a pick-six. The two-point conversion was no good but the Panthers had life at 28-12 with 4:41 remaining in the third quarter.

The Panthers only attempted one pass in the entire game and it came with 11:02 of the fourth quarter, a 17 yard gain from Painter to Tyler Gerding. It took the Panthers another four minutes to score using their pounding running game when Isaiah Daniels scored from three yards out. The two-point conversion was once again no good and the score was 28-18 at the seven minute mark.

South Greene recovered the ensuing onside kick and drove the short field with Derek Miller crossing the goal line with 2:52 left to play. Wilhoit split the uprights for the PAT and the Rebs were on their way to a 35-18 victory.

Coach Jones said, “We got some things straightened out, we got things taken care of, you know its a big win and we get first-round playoff game”.

Engram carried six times for 86 and a touchdown. Susong was 6-of-10 passing for 94 yards and two touchdowns, but the night belonged to Conner Race scoring on the ground and in the air, rushing 12 times for 88 yards and a TD while catching 2 passes for 72 yards and a score.

Jones said, “Conner Race showed up tonight, you know he can do that and that’s what we ask of him. He had a great game tonight”.