Rebels Come Together To Take Down West Greene 74-52 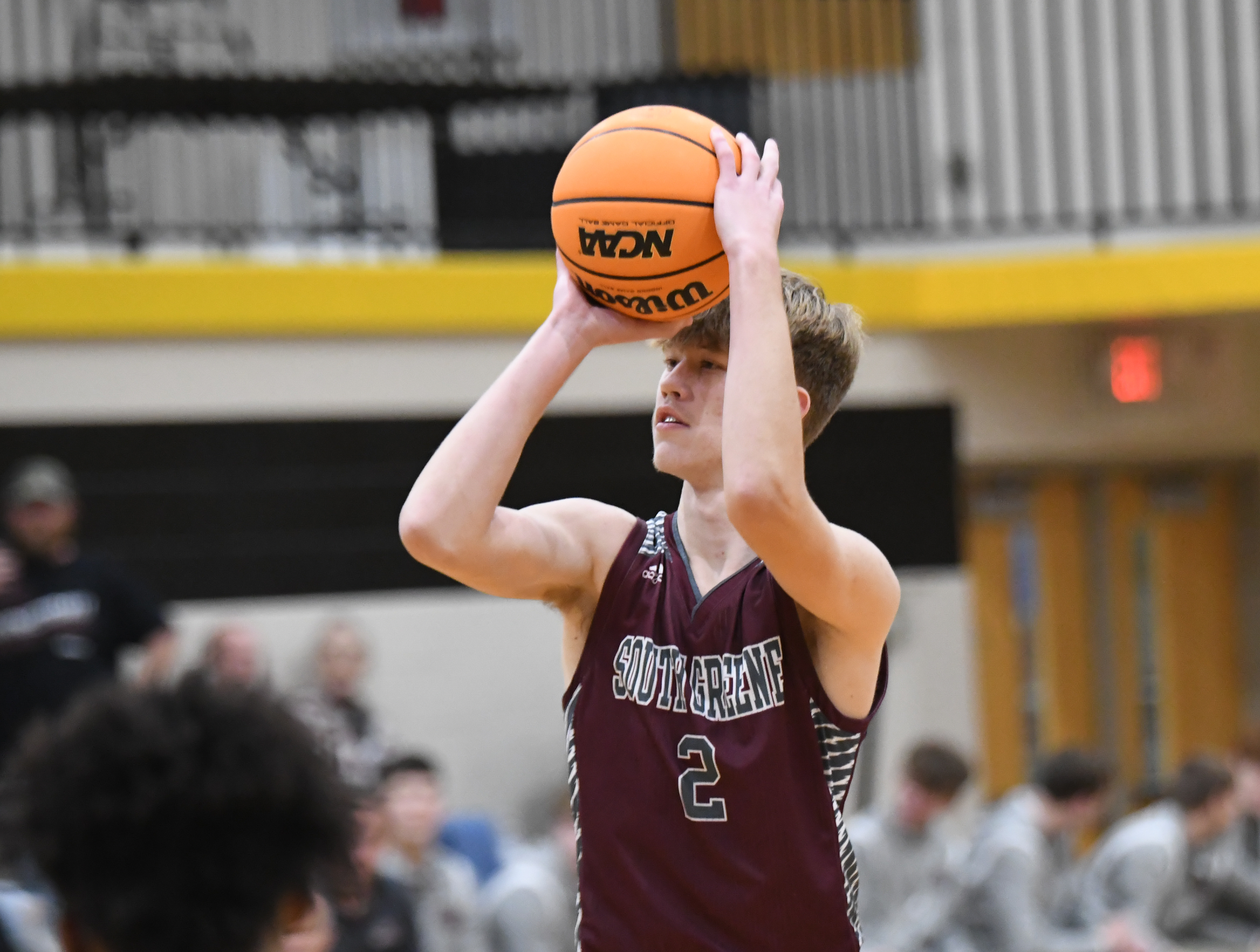 Rebels Come Together To Take Down West Greene 74-52

The South Greene boys got back on the right track with their second-straight win at home and opened up conference play with an emphatic 74-52 win over county rival West Greene on Friday.

“It was a great team effort tonight and if they continue to play like that, we’ll be able to compete. But we have got to continue to play together,” Rebels Coach Terry Hoese said. “I don’t know how many assists we had tonight, but there were a lot of people finding people for open shots and I think that was the big difference in the ball game.”

After a tough stretch to open up the season, the Rebels are streaking now with back-to-back dominant showings at home to improve their confidence going forward.

Conner Marshall got a three-point basket to roll in to start the night for the Rebels.

The Buffaloes started hot and went on an 8-0 run fueled by two three-point plays from Leyton Frye and a basket from Ethan Turner.

South Greene would call a timeout after being caught behind 8-3 only three minutes in.

Once play resumed, South Greene went on a 10-2 run to regain the lead and never trailed for the remainder of the game.

Hayden Birdwell softly laid the ball through the net and TJ Buckner landed a soft floater for two points.

Leyton Frye fired a no-look pass to Mason McCamey on the baseline for an easy bucket for the Buffaloes, but Jase Roderick tied the score at 10-10 with a three-point bucket from long range.

Roderick would give them the lead with another triple in the corner. Buckner expanded his shooting range with a three-ball also to extend their lead.

The Rebels seemed to not miss from outside the arc in the first quarter with their fifth three-pointer of the period courtesy of Roderick. He had three of those five in the first.

“It’s good to see him going because he has it. Tuesday night against Grainger he shot it well and he shot it well again tonight and he’s very capable of that plus he can get down around the rim,” Hoese mentioned.

South Greene led 21-15 after one quarter of play.

The red-hot shooting continued on both sends f the floor to start the next quarter of play with Conner Campbell splashing a three-point bucket for West Greene. Conner Marshall returned fire with his second of the night from outside.

Buckner worked the ball inside more by hitting Andrew Thornburg on a back door cut for a layup and gained a put back bucket himself. Thornburg stepped outside the paint and knocked down a three-point jumper to cap off a 10-0 run from the Rebels and extend South Greene’s lead to 31-18 before a timeout was called on West Greene’s sideline.

West Greene put together a solid run in the latter half of the quarter with Mason McCamey gaining a layup to cut their deficit to 35-22. Campbell knocked down a triple and then assisted McCamey for another scoring play.

Kelley added a layup with five seconds remaining to put the Rebels up by double digits heading into the half at 39-28.

To begin the second half Conner Marshall played strong in the paint and ripped down an offensive rebound before he sealed the deal with a layup to follow.

“He’s about 5’10” but that dude plays like he’s about 6’5” he plays hard and boxes out and goes to the boards and does a lot of trash work for us,” Hoese expressed.

Hayden Birdwell ran a back door cut and put two more on the board with a successful trip to the hoop.

Buckner added a block on the defensive end to erase a possession for the Buffs. Roderick then forced another turnover and raced down the floor for a transition bucket. Roderick slashed through the lane for another easy layup to extend South Greene's lead to 52-36.

Kelley caught fire at the end of the quarter with two three-point buckets on back-to-back possessions.

“Cooper’s capable of going off any night. Once he hits two or three, it’s almost like he could shoot it anywhere on the floor,” Coach Hoese bragged.

The Rebels held a 62-39 lead after three quarters.

Kelley continued stripping the nets with another triple from long range and added a layup a few possessions later.

Leyton Frye scored West Greene’s only two field goals of the fourth quarter with a layup and a jumper.

The Rebels swept the Buffs and sent their fans home happy with a 74-52 on their home court to begin perfect in D1-2A play.

“Everything we’ve done up to this point doesn’t even matter. From here on out the conference games are the ones that count. We can’t slip up and lose one that we need to win,” Coach Hoese mentioned. “Everybody knows Chuckey-Doak is going to be there and it’s going to be hard to beat them once. But if you get behind and somebody else knocks you off it’s going to be really hard to get back and win this thing in the end. That’s obviously our goal is to compete and have a chance to win this thing when it counts.”

Both teams hit the road for their next matchups Monday night with the Rebels traveling to Hampton and the Buffs heading West for a matchup with Gibbs.