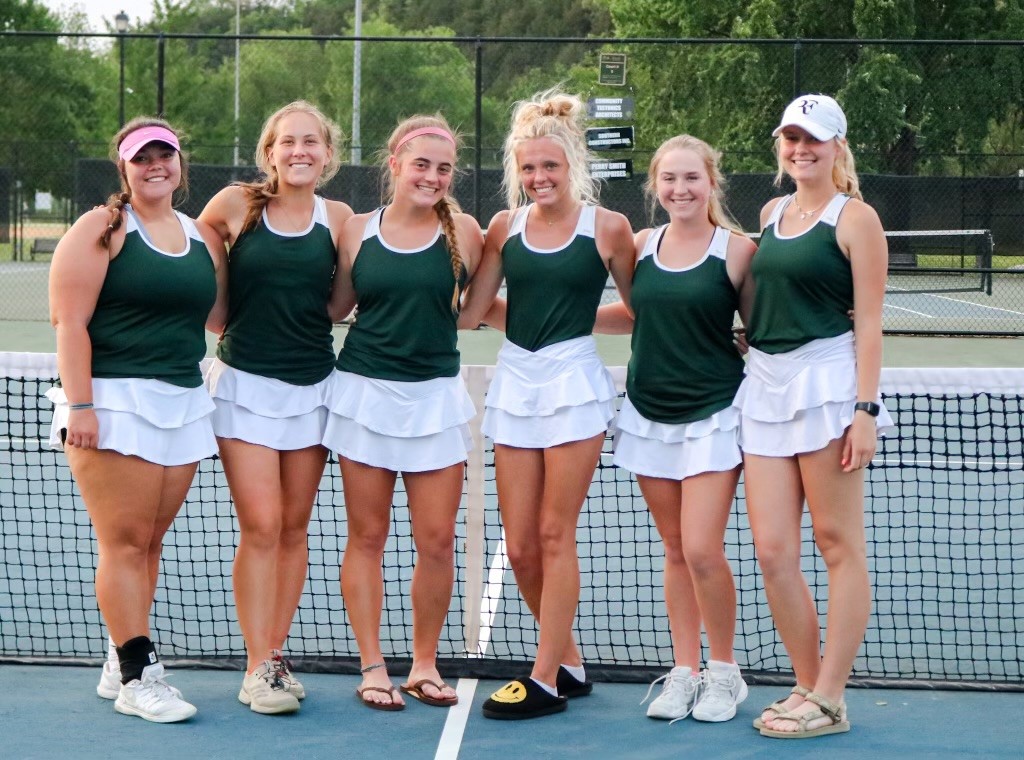 The Lady Devils earned a 5-4 win over Sevier County.

In the boys match Greeneville also earned a 5-4 win over Sevier County.

The first Twin Lakes Conference Track and Field Meet was held at Greeneville’s Terry Crawford Track on Tuesday. The Greeneville boys came away with the conference title while the girls team finished in third place behind Cherokee.

Adjatay Dabbs was third in the 200 meters. In the 400 meters Kris Amholt was third and Thomas Lollar was fourth.

In the 800 meters Russell Hickey was third and Brennan Sweat was fourth. Hickey was second in the 1,600 meters.

In the pole vault Brennan Sweat was second and Jacob Moore was third.

Bryson Myers was second in the discus and J.J. Durbin was third.

Lady Devil conference champions were Olivia McClintock in the 100 meter dash with a time of 13.64 seconds, and Jennie Bulawa in the pole vault at 6’6”.

Sydney Doane was third in the 1,600 meters and Annika Vines was fourth.

In the 3,200 Anna Jackson was fourth and Grace Evans was fifth.

The South Greene boys track team came in first place out 15 teams at the Anna Cooper Invitational in Bristol on Tuesday.

Ingram was third in the high jump and Dion Blair was fifth.

The 4x100 relay team of Olson, Blair, Burkey and Keyshawn Engram won with a school record time of 45.13 seconds.

The South Greene girls placed fourth as a team.

Natalie Freise was second in the 300 meter hurdles. Riley Ottinger was third in the 3,200 meters.

Cadence Mancil placed second in the pole vault and Aydan Dyer was fifth.

Mackenzie Niston was second in the Discus.

For West Greene Macy Hinkle won the high jump at 5’0”. Abbey Cox won the Discus at 99’9” and was second in the shot put.

Bryson Church was third in the pole vault and Drew Morrison was fifth.

For Chuckey-Doak Austin Morris was second in the triple jump and fourth in the 100 meters.

Laney Ricker was fifth in the 400 meters.

The Greeneville soccer team wrapped up District 1-AA play with a perfect record after taking down Volunteer 8-0 on Tuesday.

Blake Rogers scored twice in the first 10 minutes. First he finished a cross from Brady Quillen, and then it was Cade Snelson who delivered the assist.

In the 13th minute Quillen played a ball into the box for Drew Shelton  who finished it for a 3-0 lead.

In the 15th minute Rogers  sent in a cross on a free kick that Landyn White volleyed into the back of the net.

In the second half Greeneville went to its bench and Brody Inscore scored twice in the first seven minutes.

Ricky Thomson and Simon Holt scored the final two goals of the night.

The Huskies earned 11 hits in the win. Brady Harkleroad went 3-for-3 with a double, three RBIs and four runs scored.

Harkleroad threw one inning with one strikeout, and one walk.

On Tuesday the Chuckey-Doak softball team took down University High 22-8.

The Lady Black Knight earned 17 hits in the win. Hayleigh Taylor was 3-for-4 with a triple and a double.

Breanna Roberts was 3-for-4 with four RBIs. Saniah Atchison was 2-for-2 with four runs scored. Makayla Ramsey and Sydney Shipley were both 2-for-3. Abbie Donoho was 2-for-4.

The North Greene softball team fell to Cloudland on Tuesday 16-9.

The Lady Huskies earned 13 hits on Tuesday. Cambell Gaby went 3-for-4 with two doubles, and four RBIs.  Haley Bailey was 3-for-4 with a double.

Riley Blevins went 2-for-4. Anna Weems had a two-run home run and Zoe Sanders had a double.

North Greene and Cloudland will meet again on Monday in the first round of the District 1-1A Tournament at Happy Valley.