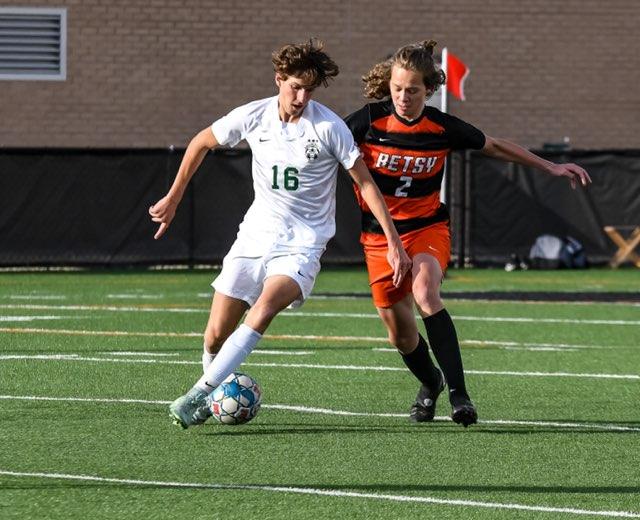 Greeneville and Elizabethton went into Tuesday’s soccer match both unbeaten in District 1-AA play, and the Cyclones were looking to prove that they have risen to the level of the top teams in Class AA.

The game started with Elizabethton’s heads spinning and by the end of the 5-1 beating Greeneville had reduced the Cyclones to a light breeze.

Greeneville started the game with two goals in the first three minutes. First Austin Beets fired a shot from the top of the 18-yard box and put it into the corner of the frame in the first minute.

Next in the third minute Cade Snelson slid a pass through the box that Drew Shelton who finished for a 2-0 Greene Devils lead.

In the 14th minute Alden Wakefield took a pass from Snelson out of the air and sent it in for the Greene Devils’ third goal of the night.

Then it was Brady Quillen who brought the ball up the left side and found Blake Rogers who blasted the ball into the upper 90 for a 4-0 Greeneville advantage.

Rogers added another goal just before the halftime buzzer rang when he took in a free kick from Park Mitchel and curled it into the back of the net for a 5-0 Greeneville lead.

With the game in hand Elizabethon’s Eli Williams added a second-half goal.

At the Region 1 Decathlon on Tuesday at Hardin Valley Academy two local athletes did well enough to earn automatic berths to the state decathlon. In Class A West Greene’s Bryson Church placed second and in Class AA Greeneville Keelen Lester was also second.

The state decathlon will be held May 18-19 at Brentwood High School.

Three other local athletes will have a chance to make the field as well. Once all regions are complete six more decathletes will be added to field as at large draws. In Class A South Greene’s Dion Blair and Hunter Burkey placed fifth and sixth respectively and will have a chance to earn one of those six spots. In Class AA Greeneville’s Morgan Leach was third and will also be in contention for an at- large spot.

Church and Lester join South Greene’s Ava Clark and Natalie Firese, who qualified for the state pentathlon on Monday, as the first local athletes to earn trips to The TSSAA’s Spring Fling.

The South Greene softball team earned a 13-2 win over Cherokee on Tuesday.

The Lady Rebels earned 17 hits on Tuesday with Whitney Casteel going 4-for-5 with a home run, four RBIs and three runs scored.

Amelia Mullins went 2-for-4 with a double and two RBIs. Evie Rader, Anna Willett, Madison Hensley and Katie Willett were all also 2-for-4.

The North Greene baseball team started Tuesday evening with a 2-0 win over Johnson County in the first game of a double header.

On the mound Jeshua Crawford shut down the Longhorns. In five innings he struck out two, walked one and gave up four hits.

In game two of the double header Johnson County took a 7-2 win over North Greene.

The Huskies again were held to three hits with Drexel Gant, Burns and Crawford earning singles.

Adam Weir threw one inning with no strikeouts, no walks and no hits allowed.