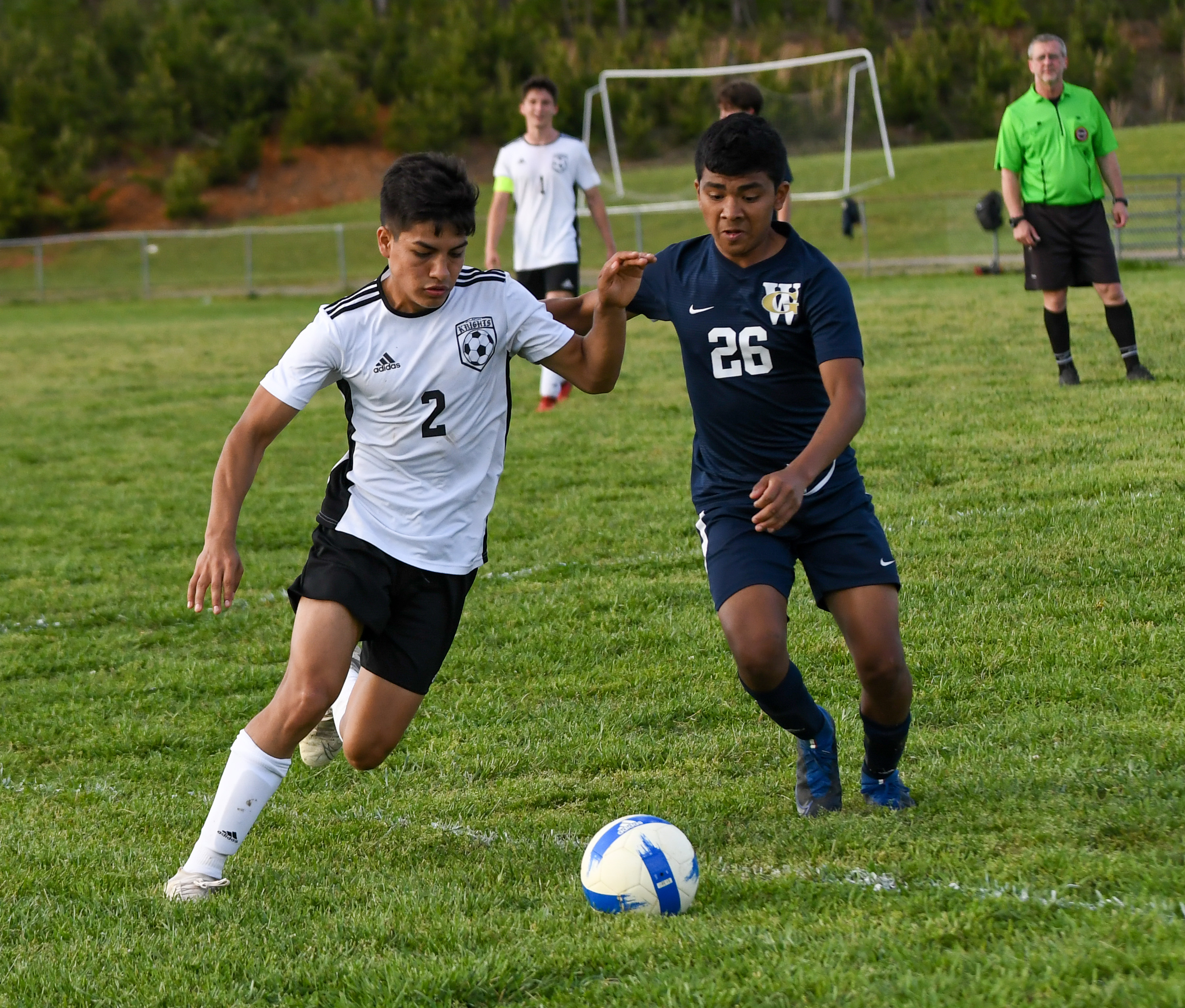 Chuckey-Doak fought tooth-and-nail for over 100 minutes on Tuesday and had to settle the score on penalty kicks, but ended up prevailing (4-2) over the West Greene in the District 1-A Tournament semifinals.

“I thought that’s probably the best game we’ve played in a couple of weeks. We had a ton of opportunities and we had some good stuff that we did on free kicks. We had some good stuff and chances on corners and we just didn’t finish,” Black Knights Coach Corey Braithwaite said. “We just gotta finish to win big games and we were fortunate that they also didn’t finish tonight.”

Chuckey-Doak moves on to play University High on Thursday for the District 1-A championship. The Black Knights have also earned a berth in the region tournament while West Greene's season comes to an end.

Chuckey-Doak kept West Greene on their toes for majority of the first half and controlled the midfield for a huge chunk of the half. Pablo Dimas negated two attempts to score by putting a boot to the ball and clearing it out of harms way.

A failed attempt to clear the ball by the Black Knights led Dani Cicero to a shot attempt but the Buffs couldn’t capitalize on the opportunity.

Roberto Vazquez then stormed into West Greene territory and earned a foul just outside the box that gave Chuckey-Doak an indirect kick opportunity. Rio Little set Ethan Grindstaff up with a shot that sailed wide of the goal.

Cicero almost put his team on top with a shot outside of the 18-yard box that landed with an awkward bounce, but Levi Wirt was quick to adjust and made the save. Another attempt a few moments later flew left of the post and out of play.

Rio Little tried turning the tide with a bicycle kick off a rebounded shot but didn’t have the right placement on the volley and watched it roll out of bounds.

Blair Shelton gave West Greene one last chance to score with less than a minute remaining in the first half with a free kick from near midfield. The Black Knights defense held up and prevented the threat as both teams entered halftime tied 0-0.

In the second half Roberto Vazquez had a field of open grass ahead of him on a break but Fernando Mejia cut the ball out from under Vazquez’s feet as West Greene kept the game scoreless for longer. Marco Rojas was also able to gain an advantage over the Buffaloes defense and catch a wide-open break on offense but Hunter Gregg made a clutch save in the goal and forced Chuckey-Doak to continue searching for success.

Ethan Wagers was next up to deliver a strike straight at Gregg. Once again, the goalie chalked up another save and weathered the Black Knight flurry.

Brayden Collins made one last push with under a minute remaining in regulation but another save by Gregg kept the game scoreless for 80 full minutes.

Both teams would remain knotted at 0-0 as overtime ensued.

In the second minute of the first overtime period, West Greene's Joshi Haase took a shot from deep and tried catching Wirt off guard. The Black Knight goalie luckily watched the ball roll past the post and out of bounds.

Double yellow cards were handed out at the end of the first OT period when Shelton and Vazquez got tangled up on the field.

In the second overtime period Shelton had a golden opportunity to silence the Black Knights on a penalty kick outside the box, but hepulled the shot too far to the left. Dani Cicero sent a slicing pass through the Black Knight defense but Haase couldn’t find an open man before time expired.

Both teams would head back to the sidelines and set their lineups as penalty kicks followed.

Ethan Wagers stepped up first and landed the ball in the back of the net to set the tempo. Dani Cicero was the equalizer and tied the tally up with a strike past Wirt.

Chuckey-Doak's Tyler Morrison nailed his opportunity in the box and gave Chuckey-Doak the push they needed.

Levi Wirt may only be a freshman, but the Black Knight goalie made the biggest save of his young career up to this point with a block on Blair Shelton’s attempt.

“He’s getting better and better at little things we’ve been working on all season,” Coach Braithwaite mentioned. “At the beginning it was just judging the ball but he’s come leaps and bounds. In the middle it was just his hands and today it came together well.”

Chuckey-Doak’s confidence was riding sky high after Wirt’s block. But cause for concern came poking its head again after Hunter Gregg blocked Ethan Gribdstaff’s penalty kick and put West Greene back in the conversation.

The Buffaloes waited in anticipation as Jonas Wick walked into the box for his attempt. Wick pulled the kick too far to the left as Chuckey-Doak caught a break and took advantage of the situation and received a big push from Roberto Vazquez.

The senior punched the ball into the back of the net and put his team up by a two goal advantage with only two Buffaloes left to go.

The Black Knight captain Rio Little marched into the box and put the final nail in the coffin on West Greene’s season. Little punched Chuckey-Doak’s ticket to Regionals with a shot past the keeper that sent the Black Knights home happy with a victory over West Greene.

University High will host Chuckey-Doak at Winged Deer Park Thursday night for the District 1-A Championship at a 6:30 p.m. start time.

“The first time we were up there we had about four chances right in front of the goal that we kicked over. Since then we’ve worked a lot on staying over the ball and getting the ball on frame when we have open shots in the box,” Braithwaite stated. “I’m hoping for similar situations to present themselves and for us to finish.”