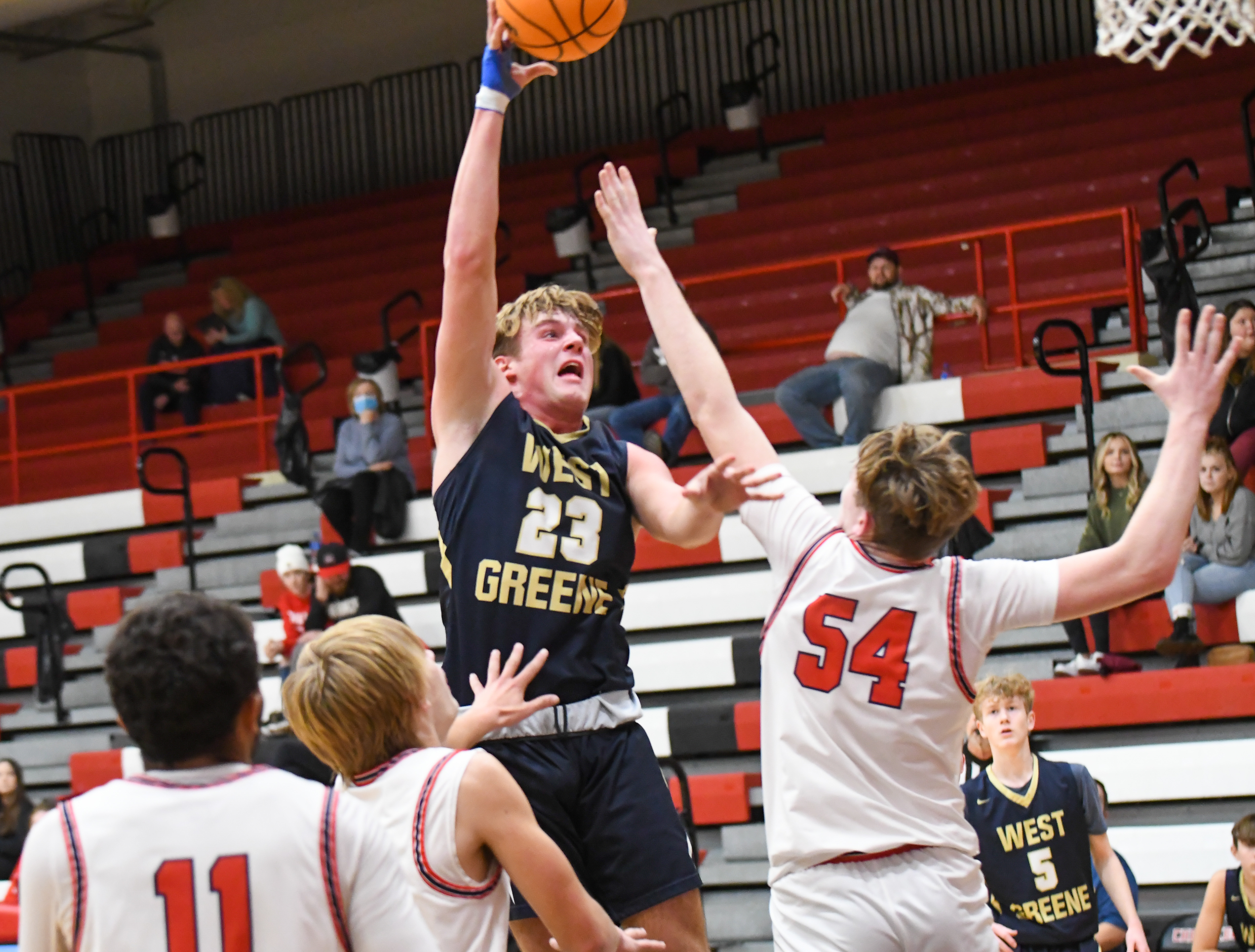 ROGERSVILLE – There was nothing Sullivan East could do to slow West Greene on Monday afternoon as the Buffaloes filled up the nets at Cherokee High School on the way to a 97-81 victory in the semifinals of the Big H BBQ Bash.

West Greene moves on to play in the tournament’s championship game on Tuesday at 8 p.m. against South Greene.

“The boys came out locked in and were ready to go from the tip,” West Greene coach Allen Tolliver said. “Overall the effort was through the roof. I’m super proud of the team effort, and we’re going to the championship.”

Monday’s game started with West Greene taking control early. Five minutes into the game Leyton Frye, Austin Wampler and Conner Campbell had all hit from behind the arc while Ethan Turner had run the floor for six points on the way to a 17-7 lead.

The quarter ended with the Buffaloes leading 25-11 after Wampler got to the rim twice and Frye pulled up from the top of key just before the horn sounded.

“We knew they were going to press a lot, and we were prepared for it. That allowed us to shoot a lot of layups. We didn’t panic, we realized we had 10 seconds to get up the floor and we took care of the ball. We didn’t let that affect us,” Tolliver said.

Wampler got West Greene going again when he pulled up for a jumper in the lane,  but he landed awkwardly and an ankle injury sidelined him the rest of the day.

Fyre and Turner each scored four points in the closing stretch, and on defense the Buffaloes made enough stops to take a 50-38 lead into the second half.

Frye, Turner and Wampler all scored 14 points in the first half for West Greene. Frye finished the day with 32 points while Turner scored 31 and Campbell was also in double figures with 12 points.

Sullivan East would not go away easy and midway through the third quarter the Patriots closed the gap to 58-53. Witcher hit from behind the arc twice while Corbin Laisure scored in the paint twice in the run.

Turner got the Buffs going by powering in a layup from the block and Frye followed by taking a steal the length of the floor. Frye then found open space along the short corner for a jumper, and Turner gave West Greene 66-55 lead by getting to the rim.

Tuner then beat the buzzer by pulling up from half court to send West Greene into the final frame leading 71-61.

The Patriots stayed on the attack in the fourth quarter and got seven points from Masun Tate to cut West Greene’s lead to 78-73 with 3:36 left to play.

Tolliver called a timeout and loosened the reigns on his squad that had been trying to control the clock.

“That run they went on was kind of my fault, I was trying to slow it down,” Tolliver said. “We were turning the ball over against a 2-3 zone, so I told them to forget and go score. We went and scored and they couldn’t push back.

The Buffs scored 19 points over the final 3:06 by running the floor and getting easy buckets at the rim. Turner scored eight points in the run, all in the paint, while Frye put in 10 points on the way to the 16-point win.