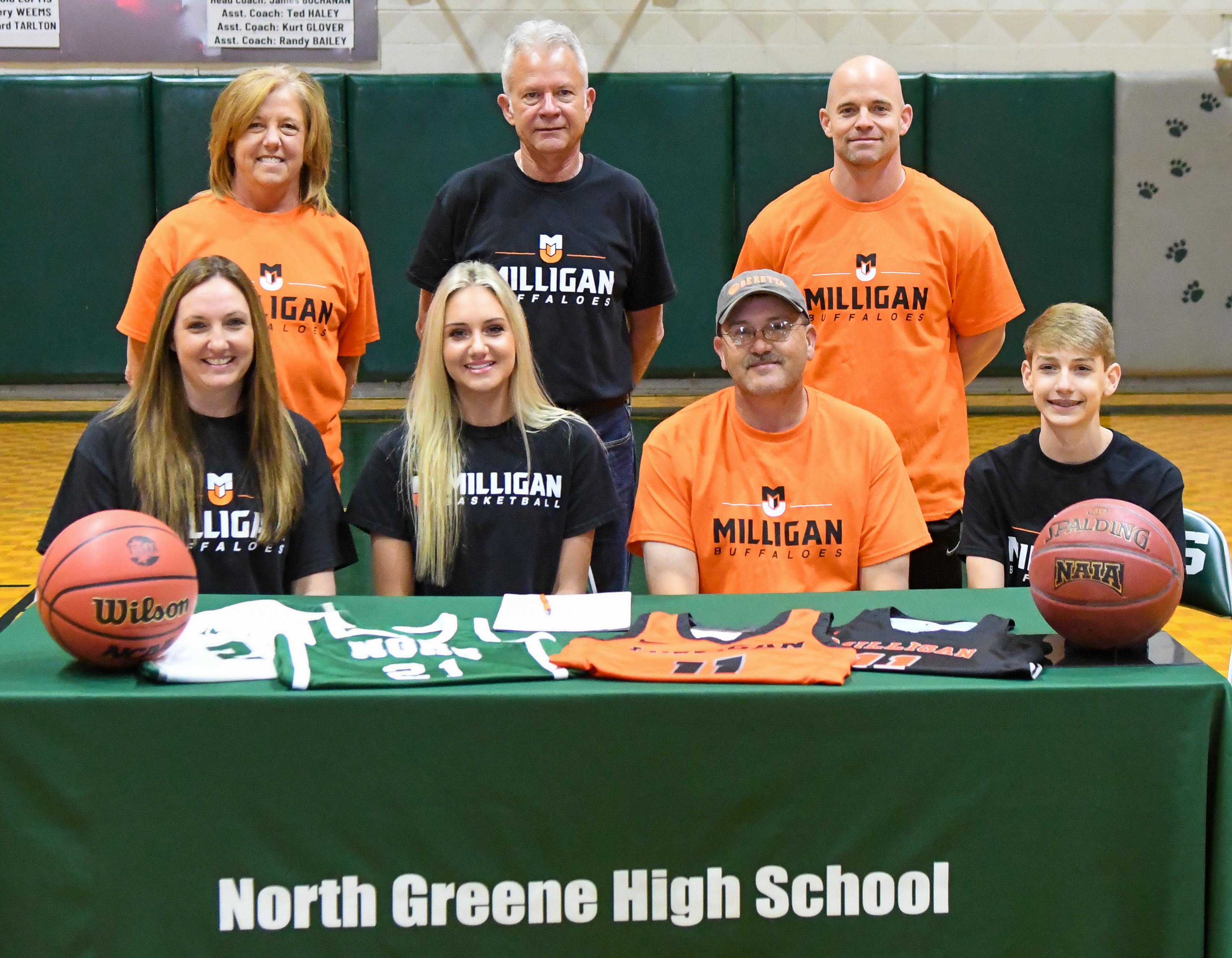 Shelby Davenport finished off a remarkable career at North Greene High School and extended her athletic playing career on Wednesday by signing a letter of intent to attend Milligan University. Davenport will suit up as a Lady Buffalo for the next four years as a part of the women's basketball program.

“It took a lot of prayer. I’ve dealt with a lot of injuries this year and I didn’t know if my body could take four more years. After it was all set and done, I was like I don’t think I can hang up the shoes when I still have a chance for four more years," Davenport said.

Milligan gains an all-in-one player in Davenport who has had her fair share of different roles in a North Greene uniform.

“At times she went from our primary post defender to our primary ball handler and I don’t know of many people that can ever say they’ve had to do that,” Lady Huskies Head Coach James Buchanan said. “No complaints just ‘okay that’s the next challenge’ and she would accept it.”

Throughout her senior season, playing at the collegiate level was only an afterthought. Shelby’s focus was mainly on graduating school and giving everything she had left on the court for the Lady Huskies in her final games in a North Greene uniform.

“Throughout the season I was not going to play college ball anywhere,” Davenport mentioned. “After the season, Coach Kylie (Russell Greer) at Milligan hit me up and said they were interested and that was close to home. I love that cause I want to stay around, I have a brother here.”

Milligan’s play style is a bit different from what she’s used to at North Greene. The adjustment from one level of competition to another is something that will be hard to adjust to.

“I’m going to focus a lot on strength training. It’s a lot different than how we played here at North Greene and they’re a little bit slower,” Davenport said. “I’ve got a lot to work on, but I’m going to spend the summer getting ready.”

Although her accomplishments on the court are stellar, her impact on the program off the court holds just as much weight. Her teammates and head coach James Buchanan have helped mold her into the person and player that she is today.

“We do devotions before every practice and every game so that’s helped me grow a lot in my faith,” Davenport said. “And the girls, I’ve been around them since second grade, so they’re family and it’s hard to leave them. They’ve been very supportive of me and so has coach and I couldn’t have asked for a better place to spend my last four years.”

Shelby reflected on her career and moments that she’ll hold with her forever. The memories inside Jerome Woolsey Gymnasium with her teammates, coaches, and family have been something that most players only dream of accomplishing.

“It kind of doesn’t feel real to me. I know a lot of people dream about doing the things that we did and they don’t get the chance to do it,” Davenport continued. “Everything I did is great and all but I couldn’t have done half the stuff without them.”

“Amazing player and amazing person. We’re going to miss her here but we’re so happy and thrilled for her that she’s going to keep playing,” Coach Buchanan said.

Shelby plans to major in the exercise science program at Milligan and pursue a career as a  physicians assistant.