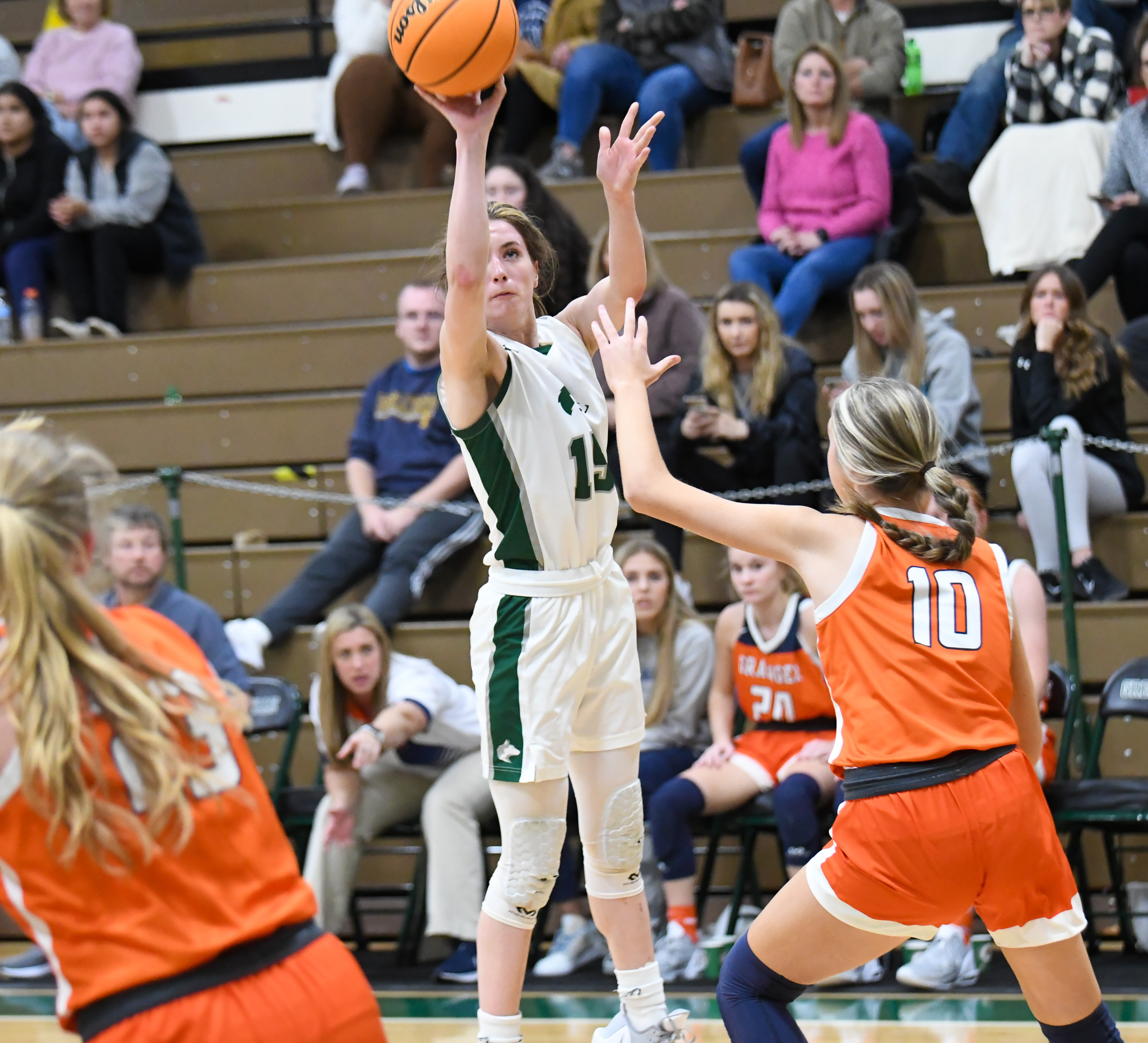 North Greene locked down on defense and got a huge offensive effort from Sonya Wagner to close out the first day of the Andrew Johnson Bank Ladies Classic with a 48-40 win over Grainger.

“I’m super proud of this group, this is a big win,” North Greene coach James Buchanan said. “These kids that have been here and while some of our girls have hurt, it’s good to see them reap the benefits of their hard work. They could have used a million excuses, but they didn’t. Especially Sonya, she has carried offensively all year long, and she did it again tonight. She’s playing great, but I could brag on all of them right now.”

The win avenges a 43-42 overtime loss to the Lady Grizzlies on the opening night of the season, and Buchanan feels like it shows, that despite some setbacks, his team is growing.

“I told this group that when we played them in the first game that were going to see them again, and we would have a chance to see if we improved,” Buchanan said. “Grainger is so big a strong and physical, and they rebounds so well. And we have had some seybacks since then. But this was a game we wanted, bad, and we played like we wanted it.”

Tuesday’s action started with Wanger driving down both sides of the lane for a pair of layups and a quick 4-0 advantage. Those were the first of Wagner’s 23 points, as the Lady Grizzlies never figured out how to stop her.

Grainger was able to tie things at 4-4, but then Haley Bailey dropped in a floater and made two at the foul line to stretch the advantage to 9-4.  In the final minute of the quarter Grainger got lay ins from Alyvia Sneed and Adison Hayes to close the gap to 9-8.

In a methodical second quarter the Lady Grizzlies were able to knot things at 13-13 when Ava Dellinger sank a jumper from the short corner.

Over the final three minutes of the first half North Greene’s defense shut down Grainger, and kept it from scoring another point before the break.

“We did a good job of matching their physicality,” Buchanan said. “We preached to them that we have to cover ball screens with all five players, not just the two in the screen, and they all were reading the right things. These girls carried out the game plan and did everything we asked them to do.”

On the offensive end Cambell Gaby took a feed from Wagner and laid it off the glass to give the lead back to North Greene. Next Wagner broke away from the Lady Grizzlies and kicked to Grace Buchanan for a triple in transition. Then just before the buzzer sounded Buchanan heaved a pass across the formation to Wagner for a corner trey that gave the Lady Huskies a 21-13 lead going into halftime.

In the third quarter North Greene extended its lead at the foul line, going 9-of-10 at the charity stripe to twice push the advantage to 12 points. On the night North Greene shot 22-of-26 from the free-throw line, while comparatively Grainger went 7-of-16.

“When you shoot like that from the free-throw line you’ll always have a chance,” Buchanan said. “First we were strong with the ball and put them in some situations where all they could do was foul us. Then we brought back points. We have not been shooting great at the free throw line this year. We’re in the high 50s as far a percentage, and we want to be around 70 or better. We’re proud and we’re happy with how they shot it tonight.”

The quarter closed with the ball moving quickly from Wagner to Gaby to Ella Head for a breakaway layup that put North Greene up 34-22 going into the final stanza.

With its back against the wall in the fourth quarter Grainger’s offense found some life and almost doubled it production in the final frame to put some pressure on the Lady Huskies.

Midway through the quarter Maddie Hurst grabbed an offensive board and sent it to Hayes at the top of the key for a triple that closed the gap to 39-37.

A few empty possessions followed with the pressure mounting on both teams, but with 2:47 left Wagner grabbed a rebound and went the length of the floor before dropping a floater to give North Greene a 41-37 cushion.

Marly Tanner sank a straight-away trey with 1:35 left to play to close the gap to 43-40, but North Greene was able to shut down the Lady Grizzlies the rest of the way to hang on for the victory.

North Greene moves on to play Upperman on Wednesday at 1:30 while Grainger will be back in action on Thursday at 9:00 a.m. against West Greene

Knoxville Catholic’s high-pressure defense was too much for Chuckey-Doak to handle in the opening game of the Andrew Johnson Bank Ladies Classic and as a result the Lady Black Knights fell 68-18 on Tuesday afternoon.

Tuesday’s action started with the Lady Irish scoring the first nine points, six of those came off of turnovers with Ensley Perry scoring on a pair of transition layups. Sydney Mains had jumper from the lane and a tripe from the right wing.

After a free-throw by Faith Yokley broke the streak Catholic again scored nine unanswered to go in front 18-1. Mains hit from deep again as part of her game-high 16 points.

Two more free-throws by Chuckey-Doak followed but the Lady Irish took a 20-3 lead into the second quarter.

In the early portion of the second quarter Mains, Logan Connatser and Jazmin Williams all hit from behind the arc for Catholic as it stretched its lead to 31-5. That lead grew to 41-5 after a jumper and a layup from Amya Reed.

Chuckey-Doak’s only field goal of the first half came with 21 seconds left when Coutnee Jones sank a trey from the right side, but Catholic took a 44-9 lead into halftime.

In the second half Chuckey-Doak found a little more success on offense and only turned the ball over six times, compared to 19 in the first half. Hayleigh Hensley and Saniah Atchison scored inside and Kennedy Brown hit a corner three, but six different Catholic players scored in the third quarter as the lead grew to 62-16.

With the clock running in the fourth quarter Catholic was able to score six more points and earn a 50-point win.

Williams was also in double figures for the Lady Irish with 12 points while Brown led Chuckey-Doak with five points.

Catholic advances to play Mercer County, Ky. On Wednesday at 4:30 p.m., Chuckey-Doak will play Morristown West on Wednesday at 9 a.m.

Scoring was a challenge for West Greene on Tuesday in its opening game of the Andrew Johnson Bank Ladies Classic as it fell to Pikeville, Ky. 69-22.

Tuesday’s action started with Pikeville playing tough defense, turning turnovers into easy baskets on the other end on the way to a 22-0 lead with 3:37 left in the first quarter. Trinity Rowe scored 12 of those points to lead the way for the Lady Panthers while Rylee Theiss put in six.

Taylor Lawson got West Greene on the board with a free throw, but that was all the Lady Buffaloes could muster as they fell behind 26-1 after one quarter of action.

Things did not get much better for West Greene in the second quarter as it managed just four points, with a layup by Lawson representing the Lady Buffs only field goal in the first half.

Kristen Whited Scored nine points for Pikeville in the quarter as its lead grew to 44-5 at halftime.

Midway through the third quarter the Lady Panthers got triples from Whited and Kylie Alvin while Leighan Jackson scored  five points for a 55-5 advantage.

Breanna Ellis was able to knock down a triple for West Greene, but the Lady Buffs trailed 60-10 after three quarters of action.

In the fourth quarter Madi Brown was able to create some offense for West Greene as she put in 10 points to close the gap to 69-22 at the final buzzer.

Brown led West Greene on Tuesday with 12 points. For Pikeville Whited led a balanced attack with 14 points while Rowe had 12.