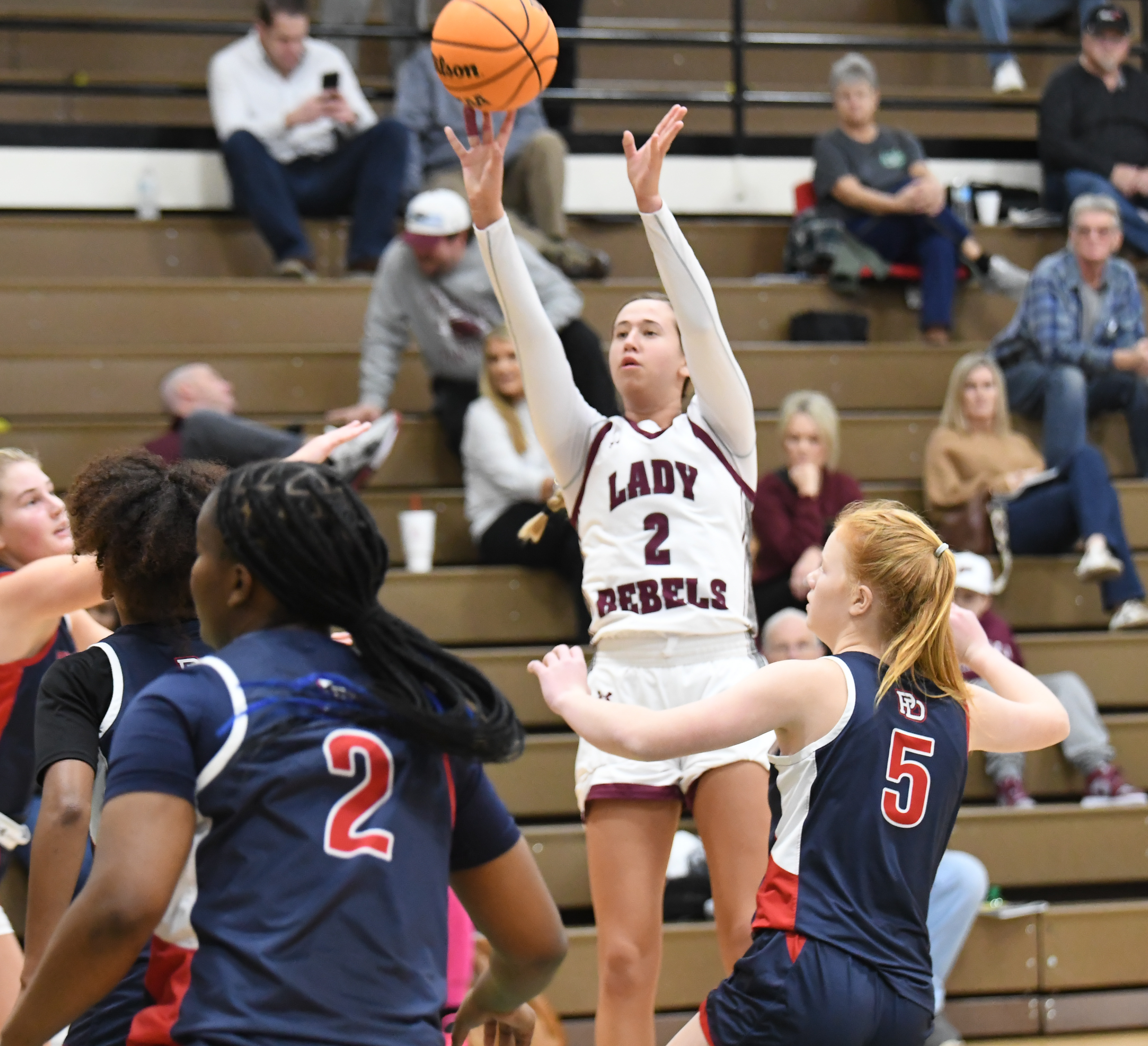 On the third day of the Andrew Johnson Bank Ladies Classic South Greene was able to stay neck-and-neck with Providence Day-Academy of Charlotte, North Carolina for one half, but in the second half the shots stopped falling and the Lady Chargers pulled away to a 50-37 win.

Providence started the day by jumping out to a 10-2 lead behind five points each from Caroline Swinson and Jaida McClure.

The Lady Rebels got going with Kortnei Bailey scoring inside and Madison Hensley sinking a jumper from the wing, but the Lady Chargers ended the period leading 13-6.

South Greene found its stroke from behind the arc in the second period. Ryleigh Gregg got the Lady Rebels going when she took a feed from Jordyn Roderick and nailed a triple from the corner. On the next possession Gregg returned the favor and set up Roderick for three points as South Greene’s deficit shrank to 13-12.

Providence Day was able to stay in front, but three-pointers from Haley Susong and Madison Hensley followed for the Lady Rebels. With 51 seconds left Arianna Hoese made one at the charity stripe to pull South Greene to within one point at 23-22.

The half ended with Lauren Jensen driving to the rack as the buzzer rang out to give Providence a 23-21 lead.

The break seemed to cool off South Greene while it warmed up Providence’s Jordyn Latter who started the second half by turning a pair of turnovers into breakaway layups and a 29-22 lead.

South Greene managed to score just six points in the third period and it took almost three minutes for Hensley to make the first field goal.

Despite that South Greene was still squarely in the contest until McClure and Layla Clark came up with a pair of layups in the final 21 seconds to put Providence up 37-28.

Providence started the fourth quarter on an 8-2 run to stretch the lead 45-30 as South Greene’s offense continued to struggle to get into any kind of rhythm. The Lady Rebels were able to connect on just four field goals in the second half as the Lady Chargers pulled away to a 13-point win.

North Greene has had to play shorthanded all season, and on Thursday in the Andrew Johnson Bank Ladies Classic it was down to just six players. The Lady Huskies battled through the adversity, but Webb School Knoxville was too much and took a 55-40 win.

The game started with Webb scoring the first eight points. Meeyah Green put in four of them.

Zoe Sanders, who is getting closer to 100 percent after an ankle has sidelined her for most of the season, breathed some life into North Greene’s offense with an old-fashioned-three-point play that she followed by looping through paint for a floater that made the score 10-5.

Over the final two minutes of the first quarter Green and Katelyn Overton hit from deep to give the Lady Spartans a 20-8 advantage.

North Greene was able to keep pace through the first four minutes of the second frame. Sonya Wagner swiped the ball at midcourt and turned it into a bucket on the other end that cut Webb’s lead to 24-14.

After that Webb’s defense smothered the Lady Huskies to spring a 10-0 run before Wagner scored the final four points of the first half. That led to the Lady Spartans holding a 34-18 lead at the break.

Early in the second quarter Webb scored 13 unanswered points with Green dropping in six points and Madelyn Ladd adding four on the way to a 47-20 lead.

Wagner got North Greene going again with a three-pointer and followed it with a jumper from beyond the elbow. Sanders finished the period with a strong post move that resulted in a layup that cut Webb’s lead to 49-27.

In the fourth quarter with Webb playing to preserve the lead North Greene got four point from Cambell Gaby and five from Sanders to close the gap to 55-40.

Grainger jumped in front of West Greene quickly on Thursday morning and handed the Lady Buffs a 64-38 loss on day three of the Andrew Johnson Bank Ladies Classic.

The Lady Grizzlies scored the first 13 points of Thursday’s action with Maddie Hurst scoring six of them.

Breanna Ellis got West Greene on the board with a pair of free throws, but the Lady Buffs were held without a field goal in the opening frame as Grainger took a 17-5 lead.

Ellis knocked down two triples early in the second period to keep West Greene within striking distance, but then Grainger scored 14 unanswered points with Addison Hayes scoring seven points in the run. The first half ended with the Lady Grizzlies leading 38-15.

In the third quarter West Greene found ways to get the ball inside to Taylor Lawson and she scored nine points to keep pace with Grainger. The quarter closed with no change in the margin, but Grainger still led 49-26.

In the fourth quarter Lawson scored six more points while Ellis and Maddie Bryant each hit from behind the arc, but Grainger was able stay in front on the way to a 64-38 win.