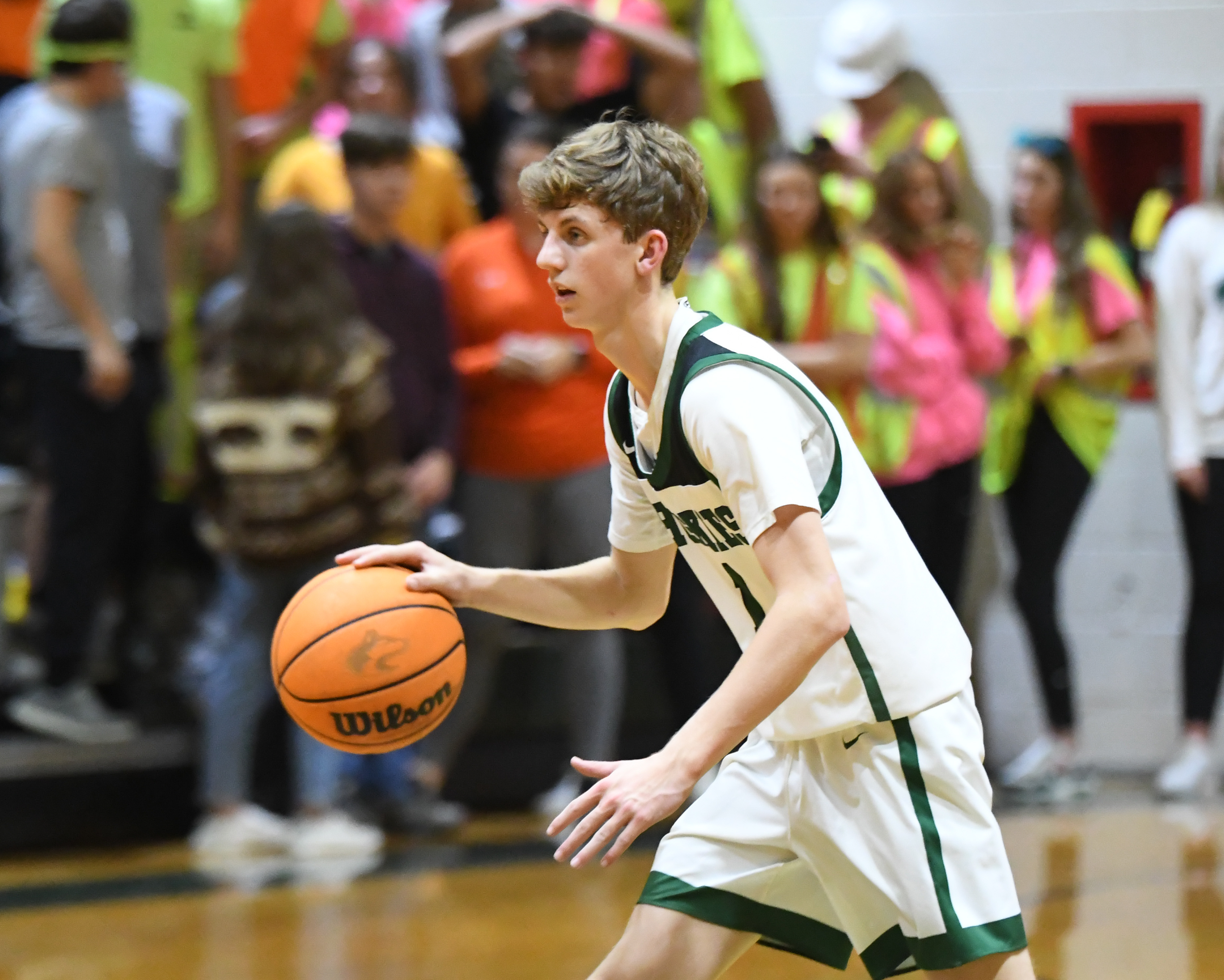 JOHNSON CITY - North Greene battled blow-for-blow with University High in the first half but a 9-0 run in the third quarter to gave it enough separation to allow the Huskies to claim their first conference victory 55-47.

“Anytime you can get a road win in the conference over a quality opponent it’s good. I didn’t think it was perfect. We really struggled with their pressure,” North Greene Head Coach Sam Tarlton said. “I thought we were really good on the defensive end. They’re a really good offensive team and we held them under 50. That’s something we talked about and I thought our defense was good.”

Andrew Cole knocked down a mid-range to blow open the scoring and draw first blood for UH.

Jason Britton got trapped under the basket with nowhere to go and dished it out to Bennett McLain underneath for a layup. Andrew Cole fired right back with a trey in the corner.

Luca May gave North Greene their first lead of the night by stripping the net from beyond the arc for a triple.

AJ Murphy tied things at 7-7 with a quick pull-up jumper.

Jason Britton got loose from the defense and put a soft floater up and through the net for another deuce.

The Huskies held a close 11-9 lead after the first quarter.

The Bucs had a tough time getting a shot to fall to open the second quarter, but Andrew Cole was finally able to produce a bucket after two missed shots from his teammates. Jordan Carter spread the floor out and busted a three-pointer in the corner to push them back ahead.

Britton cut through the lane for a layup to break a two-plus minute scoring drought for the Huskies. Sam English buried a three from the top of the key to tie the score once again at 16-16.

Murphy’s smooth jumper in the mid-range gave the Bucs another lead, but Jason Britton snatched it right back with a three-point bucket in the corner. The lead changed hands once again with Pete Boynewicz downing a baseline floater.

North Greene wouldn’t go away as Britton came right back down the floor to nail a floater and give his team the lead again. Sam English connected on a catch-and-shoot three to push the Huskies out to their biggest lead at 24-20. Both teams would head into the break with the Huskies holding a four-point advantage.

University High came out of the half on a 4-0 run to even the score again. Drew Finney pushed through contact to lay the ball through the hoop and AJ Murphy double-clutched a layup through two defenders.

Bennett McLain killed their momentum with a triple from long range. The sophomore completed an old-fashioned three-point play next to provide six-straight points. Britton also found himself with an opportunity to convert a three-point play through an and-1 to cap off a 9-0 run for North Greene. Their lead grew to 33-24.

Finney ended the run with a wide-open layup at the basket. Lance Carrico drained a three-point bucket to extend the Husky lead.

A technical foul was assessed to North Greene that gave the Bucs a spark of energy that kept the door open. Only one-of-two technical free throws would fall, but a layup by Andrew Cole gave them a three-point trip on their end of the hardwood. Murphy intercepted a pass and sprinted down the floor to down a layup and set the score at 38-33.

Sam English scored a much-needed layup for the Huskies.

University High came right back with a layup from Jordan Carter. AJ Murphy managed to knock down an off-balanced shot and turned it into a three-point play by nailing a free throw.

The North Greene lead was cut down to one possession, but Dennis Malone powered through for a layup to boost their lead to 43-38.

Jordan Carter stole a pass and cut it back to three with a layup. Bennett McLain’s clutch layup with a minute and a half left put them back ahead by five. Sam English took a huge charge in the paint to erase a possession from the Bucs in the final minute of play.

AJ Murphy knocked down two free throws at the line and the lead was back down to one possession at 47-44.

The Huskies created a little breathing room with a 3/4 court inbounds pass to Lance Carrico that ended with a quick layup from Jason Britton. Sam English added two free throws late in the contest to give them a little more comfort.

“I thought he did a great job making some big shots in the second half. He made two free throws down the stretch and took a big charge. He made big plays for us and we’re going to need that out of him,” Tarlton expressed.

Brady Weems drained a three-pointer to cut the lead down to four, but clutch free throw shooting down the stretch allowed North Greene to close it out.

The Huskies endured a tough road battle and came out on top 55-47 to earn their first win in conference play.

Free throw shooting was a major key to their victory with an efficient 13-of-16 clip at the line.

“That was a bright spot. When we were able to not turn the ball over and got fouled at the end Sam stepped up and made some big ones along with Jason and Dennis. They’re good shooters and I expect them to do that but that was good to see down the stretch,” Coach Tarlton stated.

Jason Britton led the Huskies with 19 points. Bennett McLain and Sam English both contributed with 12 points each.

The North Greene girls took care of business on the road and picked up a 50-18 victory over University High to claim their first conference win of the season inside of Brooks Gym.

North Greene led wire-to-wire from the opening tip and never let off the gas. Their defense was supreme holding the Lady Bucs to zero points in the final eight minutes to coast to victory.

The suffocating defensive effort started early with Mercy Buchanan intercepting a pass under University’s basket and putting it off the glass for two quick points. Sonya Wagner didn’t let them advance the ball much further with a steal on the ensuing inbounds that also resulted in a layup.

Kathryn Joyner scored the Lady Bucs first basket in the paint with a foul added on. The free throw would bounce off the rim, but Priya Lewis was there to grab the miss and put it back off the glass for a four-point trip down the floor.

Grace Buchanan camped out in the corner and stripped the nets for a three-point shot when presented with the opportunity.

Haley Bailey’s defense in the post was a key factor in the Lady Huskies’ win. She accounted for three steals in the first quarter alone. One of those led to an easy layup underneath the basket by Wagner.

North Greene held a 16-6 advantage after the first quarter.

Cambell Gaby grabbed a rebound on defense and sprinted the floor for a coast-to-coast layup. Ella Head stripped the ball away from a defender and fed Sonya Wagner in the paint for a layup next. Wagner anticipated another steal moments later and had all the time in the world to lay the ball back off the glass for two more.

Mercy Buchanan drained a three-point bucket next on the wing to boost North Greene’s lead to 25-6.

Vania Ortiz banked in a jump shot in front of the basket for University High to put them in the scoring column for the quarter.

Sonya Wagner added another layup on North Greene’s last possession of the half to send them into the break with a 33-8 lead.

Emma Chandley and Priya Lewis started the third quarter hot for the Lady Bucs with a layup apiece.

Ella Head fired away from the corner with a three-point bomb to put North Greene back in control.

Katy Stancil kept up the pace with a triple from outside the perimeter. Sonya Wagner would suffer an ankle injury during the play and would sit out for the remainder of the game. She finished with a game-high 16 points.

Mercy Buchanan sprayed away from beyond the arc for a three-point bucket with an assist from Haley Bailey.

The Lady Huskies remained in control after three with a 45-18 lead and had no trouble cruising their way to victory in the final quarter of play.

North Greene preserved their first conference victory after a 50-18 thrashing of University High to improve to 6-7 on the year.

The Lady Huskies will compete in the Andrew Johnson Bank Ladies Classic next week with their opening matchup on December 27th at 8:30 P.M. against the Grainger Lady Grizzlies.