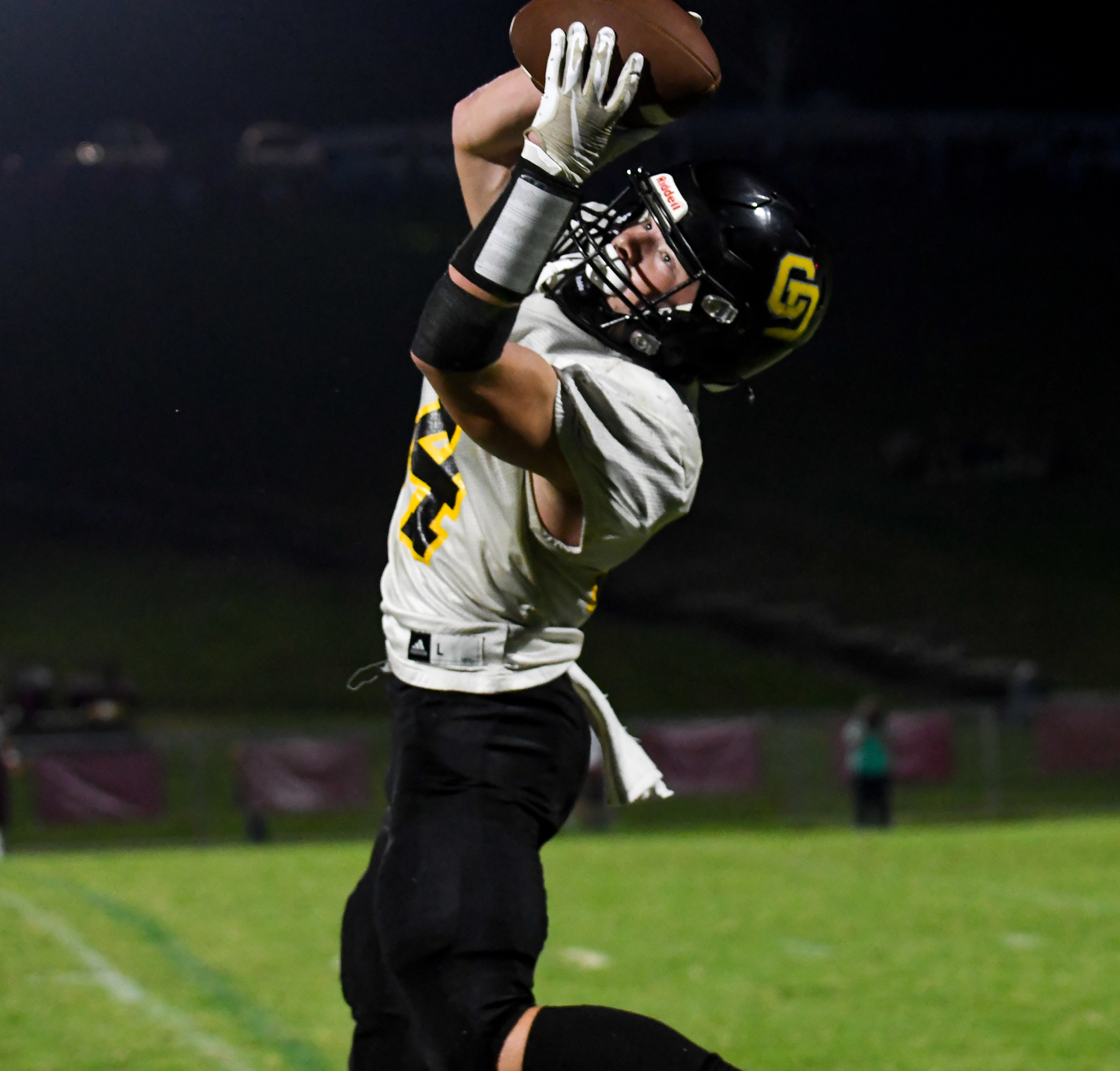 MOUNTAIN CITY – The only thing that could stop Brock Rush on Thursday night was the goal line. He raced past Johnson County on the way to four touchdowns that helped Chuckey-Doak open Region 1-3A play with a 39-6 win.

In an ultra-competitive Black Knights’ receiver group Rush was the only starter that did not find the end zone in last week’s 49-7 win over Happy Valley, and that had him hungry coming in to Thursday’s contest. He wasted little time scoring on a run, followed it with two big plays through the air, and for good measure finished the first half with an interception return for a touchdown.

“I’m just thankful for the O-line, and I’m just happy right now,” Rush said. “I was looking to get into the endzone this week. I told coach (Chris) Sloan that this was going to be my week, and it felt so good to get that first one early. But that is the beautiful thing about this offense, anybody can do that any week, we are so versatile.”

While Rush provided the fireworks on Thursday, the night started with a heavy dose of running back Brasen Murvin who gave the Knights a 7-0 lead on their opening drive. Chuckey-Doak moved 58 yards on the opening possession with 52 of them coming on the ground. Murvin carried it six times for 34 yards and capped the drive by carrying the defense into the endzone on a two-yard plunge.

“We came out faster than last week and we did some good things,” Chuckey-Doak Dallas Kuykendall said. “We wanted to start fast and we wanted to set the tone. This was their home opener and they had the momentum, we knew we had to take that from them. Cadin (Tullock) led the charge, Brasen ran hard, and it was methodical.”

On Johnson County’s first possession the Longhorns looked to have a big gain but Isaiah Treadway stripped receiver Chase Muncy and Rush jumped on the fumble.

Back on offense Rush got his big day started. With the defense focusing on Murivn the Knights faked to him going left and handed to Rush coming from the wing on a counter to the right. The Longhorns linebackers flew to Murvin. Then once again Rush got around the corner it a foot race, and Johnson County did not have anybody that could catch the Black Knights’ speedster in a 40-yard dash.

“I think tonight just showed you the work Brock has put in, and he deserves a night like tonight,” Kuykendall said. “I’m proud of him. He has the ability to do this every time we play, and I hope to see more of these nights out of him. We see it every week in practice and it was good to see out here tonight.”

With 4:46 left in the first half Chuckey-Doak stretched its lead to 21-0. The 80-yard drive was capped with Cadin Tullock finding Austin Morris on a quick out that covered nine yards. Murvin ran in the two-point conversion.

Chuckey-Doak got the ball back with 1:58 remaining in the second quarter. The two-minute drill started with an 11-yard gain from Treadway and 24-yard pick up from Rush.

Tullock then rolled to right after Rush came across the formation in motion. The receiver made his way to the boundary on wheel route, he adjusted to the pass, hauled it, spun off a tackler and then refused to be denied as he blew through a tackler to extend the lead to 27-0.

Rush did not have to wait long to find the endzone again. On Johnson County’s first play of the next drive quarterback Connor Simcox looked to connect on an underneath route, but Rush saw the throw coming and got to it first for an interception. With the ball in hands there was nothing but green grass in front of him and he gave the Knights’ a 33-0 lead at the break.

Johnson County forced Chuckey-Doak to punt on its first drive of the third quarter, but the Longhorns muffed it and Rio Little quickly hopped on the loose ball.

On the next play Tullock found Rush streaking up the seam uncovered and easily he made it across the goal line to push the lead to 39-0.

All three of Rush’s offensive touchdowns went for exactly 40 yards on Thursday.

With eight minutes left in the game Simcox hit Jace Stout for a 28-yard touchdown that broke the shutout.

The Black Knights’ defense held Johnson County to 181 yards of offense in the win and forced three turnovers. Defensive lineman Nathan Norton was a force up front and spent as much time in the backfield as anyone bloused in burgundy, finishing off two sacks. Little had a fumble recovery and recovered a muffed punt. Elijah Elliott also forced a fumble.

Rush finished the night with three catches for 104 yards and also added four yards on the ground. Murvin ran for 84 yards and a touchdown, and Tullock threw for 221 yards and three touchdowns. As a team Chuckey-Doak produced 403 yards of offense on Thursday.

With the win Chuckey-Doak starts Region 1-3A play 1-0 and gets an early leg up in the region standings.

“It’s important to start 1-0 in conference play,” Kuykendall said. “I think we had an extra sense of urgency this week. When we are looking at the playoffs we only get four of these games. You have to make every one count. The last few years our region winner has gone undefeated. So we have to take care of these region games, they are all big.”