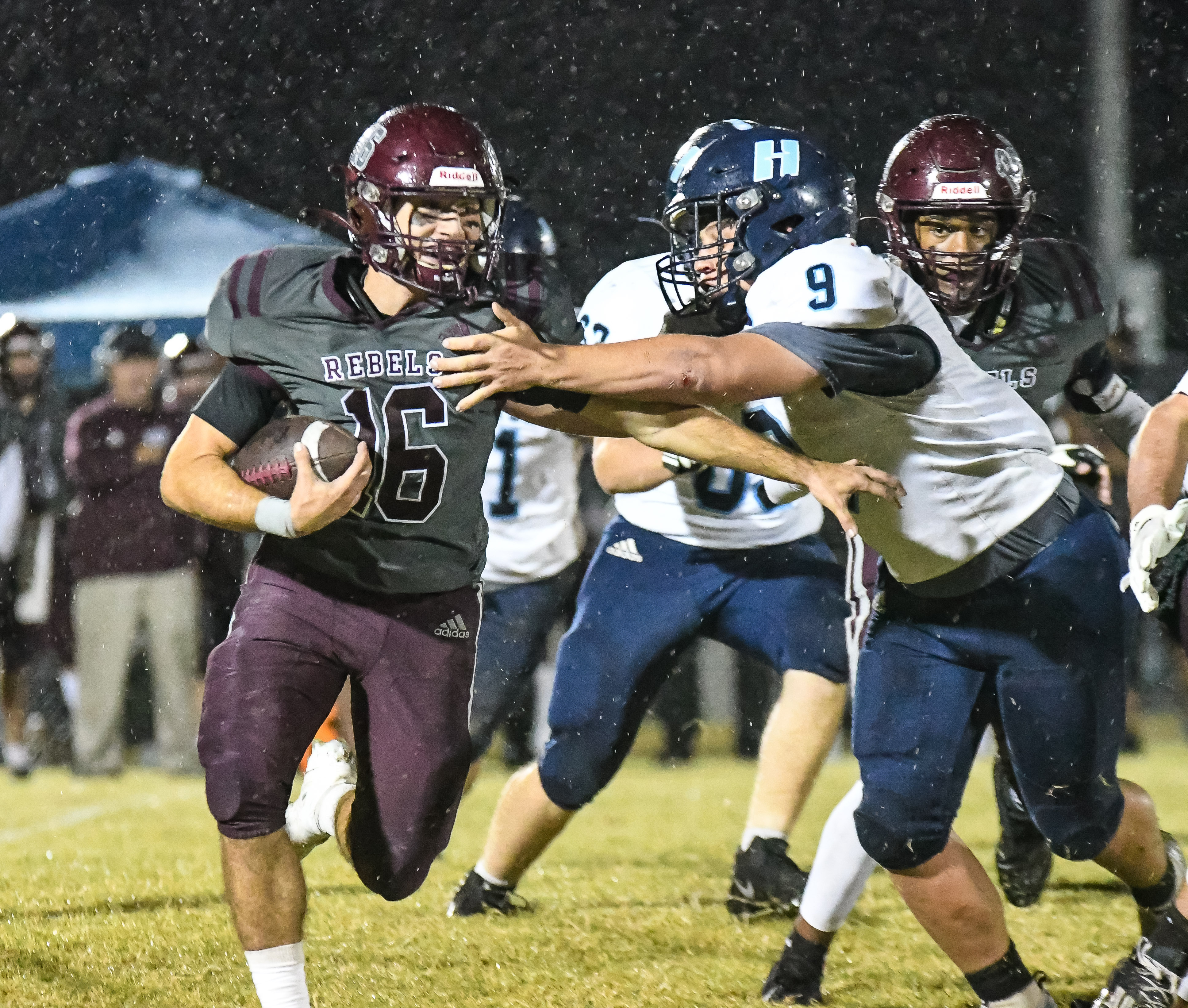 On a rainy night up on Rebel Hill the number one ranked team in the state in 2A, the Hampton Bulldogs, showed why they are number one as took down South Greene 37-0.

The Bulldogs got the night started with a 71-yard scoring drive. All of those yards were on the ground and all were by Levi Lunsford ending with a one yard plunge at the7:54 mark of the first quarter. Lunsford added the two–point conversion to make the score 8-0.

South Greene's first drive ended in a punt but Dion quickly got the Rebels the ball back when intercepted Hampton's Dylan Trivett. He returned the pick to the 22 yard line, but nothing came of the turnover when the Rebels fumble the ball back to the bulldogs.

From there the Rebels saw a steady diet of Lunsford, this time only carrying the ball on seven of the 10 plays, including the final two yards for the score. Trivett hit Jonathan Greenwell in the endzone for the two-point conversion and the visitors were up 16-0 with just under a minute gone in the second quarter.

Next the Bulldogs put together a 91-yard drive.  The 15-play drive ended with Lunsford’s third touchdown of the half from a yard out. The 2-point conversion was no good this time and the Bulldogs had a 22-0 lead with only 27 seconds left in the half.

The highlight of the game may have been during halftime when South Greene retired the jersey of former quarterback and current Carson-Newman quarterback Luke Myers.

Myers said, “It’s a really big deal for me and my community, it’s like I told my parents earlier this isn’t something you can do by yourself. I had good teammates and good coaches to get me to this point. I'm really grateful for this and super excited”.

At the half the Rebels were out gained 228 yards to six, 216 of those yards were on the ground and South Greene was held without a first down.

To start the third quarter South Greene still just could not find any yards on the ground and fumbled the ball away to the Bulldogs on the 13 yard line. From there it didn’t take the Bulldogs long to find the endzone again when Trivett tossed a scoring pass to Chance Point. Trivett then found Brody Hicks for the two-point conversion and a 30-0 lead.

After a late touchdown by the Bulldogs Nash Rader almost returned the kickoff for a touchdown but was chased down from behind at the Hampton 27-yard line for a 56 yard return. Rader's nine yard pass to Race earned their only first down of the game at the 15 yard line with only seconds to play.

Coach Shawn Jones summed it up saying, “They have a real good ball team; they’re number one in the state for a reason”.

Lunsford finished the night with 138 yards on 9 carries, as a team the bulldogs rushed for 291 yards and 344 total yards, while holding the Rebels to negative yardage. The bright spot for the rebels was Conner Race with nine tackles, one of those for a loss.

Next week the Rebels travel cross county to play at North Greene.