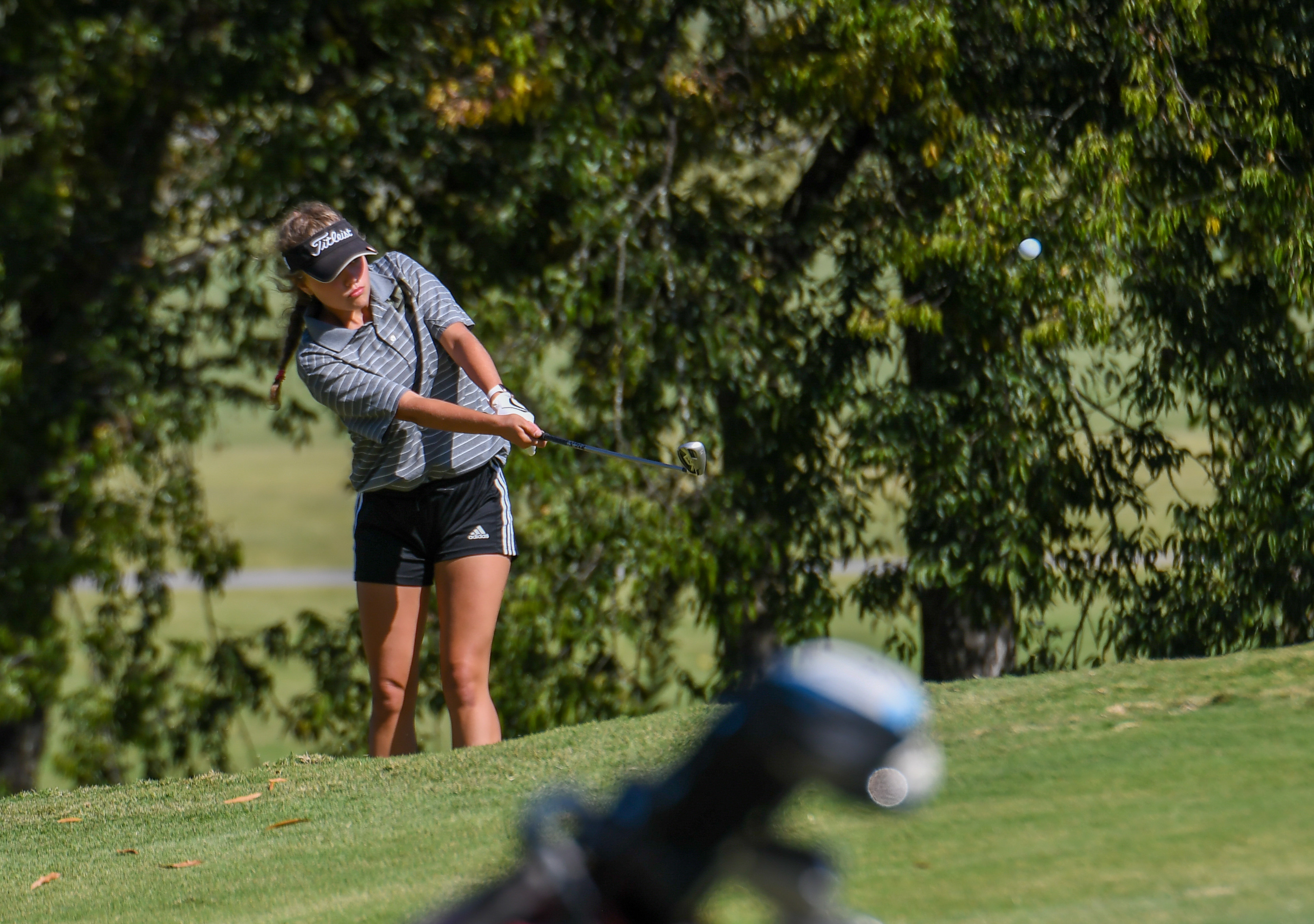 ROCKFORD – The Greene County girls were dominant on Tuesday turning in four of the five lowest scores at the Region 1-A Tournament at Egwani Farms Golf Course, and they all left thinking that they left some shots on the course.

“I’m happy for these girls, this is two in a row, and that was their goal all season,” South Greene coach Jeff Hartman said. “I don’t think they played their best, but they did what they had to do to win.”

Fox left the course feeling like she could have played better, but she improved her score from the district tournament by five strokes, shooting an 84 on Tuesday on a more difficult course. With the region title Fox advances to next week’s Class A State Tournament at Sevierville Golf Club.

“It feels really good to have the low score today,” Fox said. “I need to work on my chipping, and I should have played more practice rounds, but I’ve been working really hard leading up to this. This is my first opportunity to go to state so I’m really excited about that.”

The Lady Rebels were led by Maylei Hildenbrand with an 85 while Lindsey Howlett shot an 86 for South Greene’s team score of 171. Madison Hensley shot a 94 which was good enough for fifth-place overall on Tuesday.  The Lady Rebels outdistanced second-place Chuckey-Doak by 31 strokes.

South Greene is moving on the Class A State Tournament for the second straight year. The Lady Rebels placed fifth in the state a year ago, but were 73 strokes behind state champion Summertown. Hartman is hopeful that the experience on the course in Sevierville a year ago will help his squad move up the leaderboard this time around.

“The goal is to improve on last year’s score,” Hartman said. “They have a year’s experience and now they are a little older and a little wiser. I don’t want them focused on trying to win it, they need to focus on playing better and then we’ll see where they fall. I don’t think they will have those first-time nerves and that should make a difference.”

In addition to Fox, Kyleigh Crawford shot a 118 for Chukcey-Doak. The Lady Knights’ 202 team score was good enough for second place.

The other individual state qualifiers were Ella Compton (93) of Claiborne and Lyla Campbell (96) of Samuel Everett.

On the boys’ side North Greene’s Aidan Collier and South Greene Kolben Gregg both advanced to state tournament as individuals.

Collier was not as dialed in as he would have liked to have been on Tuesday, and shot a one-over par 72 to come in second place as an individual.

“I played very mediocre today,” Collier said. “I hit it okay, I just wasn’t hitting it in the right spots and I wasn’t giving myself close enough birdie putts. When you do that you aren’t going to get a win.”

Collier has twice placed second overall at the Class A State Tournament, and he is looking to make another run next week with the hopes of being a state champion. He hopes that his experience on the Sevierville course can give him an edge.

“Hopefully I can redeem myself next week,” Collier said. “I feel like I have a good chance to make a run at state. I just have to work on my mistakes from today. Sevierville is definitely tough and the first few holes are eye-opening. But if you play it smart its super gettable. You can’ overpower it, you just have to be patient.”

Gregg shot a 79 to finish fifth overall and earn the third individual state-qualifying spot. As a team the Rebels shot a 330 to place second as a team. Daniel Worley shot an 81, Benji Conner shot an 82 and Alec Jones shot an 88.

“I know our boys are disappointed because they could have gotten there as a team, but they had a bad day and that’s golf,” Hartman said. “But I’m happy that Kolben gets to go to state a sophomore. I hope that leads to good things in his future and he can keep getting down there.”

West Greene’s Tilynn Willett shot an 88 on Tuesday. For Chuckey-Doak Tyler Morrison shot an 87 and Jordan Pruitt shot an 88.

Alcoa won the team title by shooting a 320. Riley Parson led the way with a 71 to claim the individual championship and Noah Whitten shot a 75 to place third as an individual.

Cumberland Gap’s Matthew McCorkle shot a 77 to also advance to state as an individual.