Lady Rebels Shoot Lights Out, Rebels Get Back On Track in Sweep Of Grainger 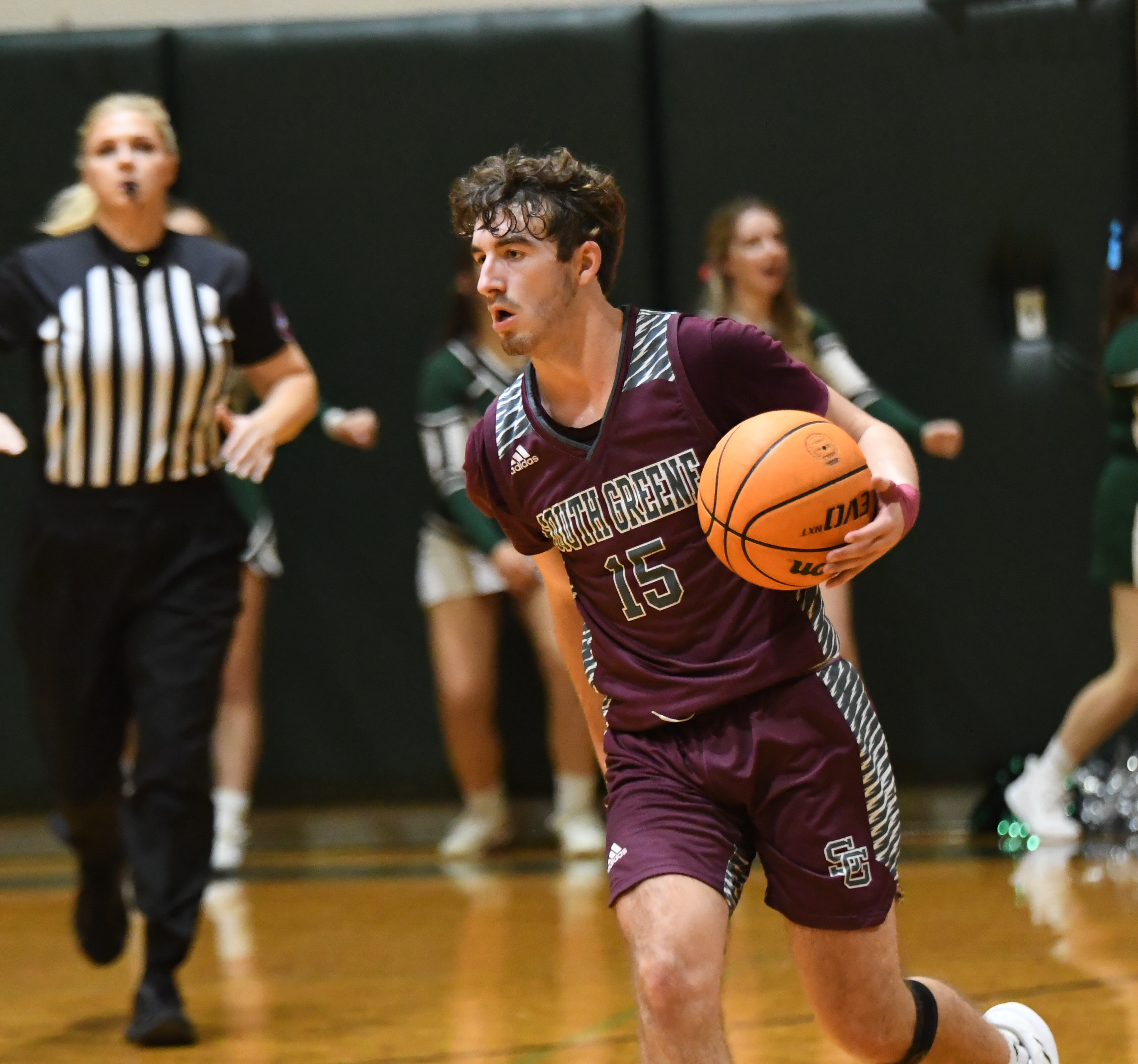 Lady Rebels Shoot Lights Out, Rebels Get Back On Track in Sweep Of Grainger

The South Greene girls locked in from long-range hitting fourteen three-pointers and put on a dominant performance on Tuesday night leaving with a 76-51 victory over Grainger.

“Believe it or not, before they took the floor, I told them that I think the three-point record is in jeopardy tonight. I just kind of had that feeling and that’s what I told them,” Lady Rebels Coach Stephen Gregg said.

Gregg’s gut feeling was correct as his team was red-hot from the perimeter all night. Kortnei Bailey led the way with 25 points and a perfect 4-of-4 stat line from three-point land. Jordyn Roderick trailed close behind with 24 points and five three-pointers on eight attempts.

Hailey Brooks opened up the scoring with a wide-open layup ahead of the defense assisted by Madison Hensley. She’d expand her range and knock down a three-point jumper soon after.

Makayla Scott put the Lady Grizzlies on the board with a long two-point shot and Adison Hayes landed a triple through the net to knot the score at 5-5.

The first quarter stayed neck-and-neck with neither team gaining too much of an edge over the opponent. Jordyn Roderick anticipated what was coming and blocked Marly Tanner’s jumper from the field. The senior post beat a double team in the paint and downed a layup through contact and converted the three-point play with a free throw.

Hayes knocked down another three to give Grainger a 13-11 lead, but Madison Hensley came right back to tie the game.

Roderick’s defense and timing was on point with another block along the perimeter.

Hensley took the ball up court herself and finished at the rim through contact to tie the score at the end of the quarter.

Both teams would stay even at 15-15 after one quarter player.

Adison Hayes got another three-pointer to fall, but the rest of the second quarter would be dominated by South Greene.

Jordyn Roderick received a lucky bounce to see a triple fall through the net. She’d grab a rebound on defense and spot up a few feet behind the perimeter for a deep three-point make. Ryleigh Gregg stepped up next and drilled a triple to take a 24-22 lead.

Kortnei Bailey didn’t score until the second quarter, but made a statement with eight-straight points when she did. Two free throws at the charity stripe got her scoring started. A layup through contact would be granted with a chance to complete a three-point play at the line which she would make. Bailey stepped out from behind the arc to knock down a three-point bucket to finish the run.

Another three-pointer from Hayes would keep the Lady Grizzlies offense going. Ryleigh Gregg fired right back with her second triple of the game.

Jordyn Roderick wasn’t done scoring yet with two more three-point buckets and a layup to finish the quarter with fourteen points.

“Jordyn was unconscious the first half,” Coach Gregg said.

The offense came easy and the defense provided back up to allow South Greene to pull away in the second period with a 30-point quarter. The Lady Rebels held a commanding 45-27 lead at the half.

“They were flying around on both sides of the ball and that was really fun. It’s been the funnest quarter I’ve been involved with in a while,” Coach Gregg mentioned.

Grainger opened up the second half with four-straight points from Maddie Hurst and a bucket from Makayla Scott.

Roderick claimed another tough layup in the paint and Ryleigh Gregg splashed another three-pointer from long range. Hailey Brooks landed a long two-point jumper from the top of the key.

Alyvia Sneed also stepped out behind the perimeter and gained three more points for Grainger’s offense.

Madison Hensley and Kortnei Bailey ended the quarter with a three-point basket each with the Lady Rebels ahead 62-41.

Bailey controlled the fourth quarter all on her own by scoring ten of South Greene’s fourteen fourth quarter points. Her quarter began with two long-range triples and ended with two layups at the basket.

“She was a pleasant surprise,” Gregg stated. “It’s great to see her step up.”

The Lady Rebels would run away with a 76-51 win at home to knock off the Grainger Lady Grizzlies.

The long ball was South Greene’s biggest ally with a 47% success rate from outside the perimeter and fourteen total makes. The Lady Rebels shot 57% from the field.

Their next matchup will be a conference game with the visiting West Greene Lady Buffaloes on Friday night.

South Greene completed the sweep in the nightcap with the Rebels knocking off Grainger 60-30. The struggling Rebels found their edge with a better night both offensively and defensively to propel them to a big win over a key non-conference opponent.

“I’m pleased with all of them. It’s been a tough two weeks and I’ve ripped these guys. To come out tonight and play well I’m tickled to death.” South Greene Coach Terry Hoese said.

The scoring would have to wait with both teams hanging zeros on the scoreboard through the first two minutes of action. Carter Williams ended the drought with a layup. Jase Roderick rose up at the rim and laid the ball through the net to cancel that out.

Drew Branson stripped the nets with a three-point bucket to put the Grizzlies back out in front.

TJ Buckner used his reach advantage to his favor and pulled down an offensive rebound that turned into two points with a quick layup following a missed jumper. He’d make a cut to the basket on a later possession and successfully laid the ball off the glass for a quick layup.

Branson stepped back for a tough fadeaway three, but Roderick answered right back with a baseline pull-up to tie the score.

Buckner was a key factor on the boards and in the scoring category for the Rebels and kissed the ball off the glass for another two points to start the second quarter.

Cooper Kelley dialed up a three-point bomb next for South Greene.

Drew Branson double-clutched at the rim and got a layup to go down.

South Greene would start to distance themselves with a strong run midway through the second quarter. Buckner euro stepped through the lane and found success with another layup in the paint. Andrew Thornburg nailed a long two-point jumper at the top of the key to give them a 22-12 lead. Hayden Birdwell hit a reverse layup to keep the momentum going.

Brady Smith and Ryland Burchett dropped two jump shots through the net late in the quarter.

The Grizzlies received a three-pointer from Smith to start the second half.

Conner Marshall had a productive third period scoring all five of his points in the quarter. A layup that drew a foul sent him to the line for a chance at a three-point opportunity that he’d complete. Another layup in transition added to the Rebel lead.

TJ Buckner’s height in the paint led to another offensive put back.

Drew Branson splashed another three-ball for the Grizzlies.

Hayden Birdwell swatted away a shot in the paint for a huge confidence boost. Jase Roderick created another scoring opportunity with a hard layup through contact.

South Greene would enter the fourth quarter with a 40-25 lead.

The final eight minutes seemed like a victory lap for the Rebels outscoring Grainger 20-5 in the final period of play.

Hayden Birdwell set the crowd on fire with an alley-oop jam to boost their confidence. Jase Roderick pump faked his way to gain a clear path to the hoop for a layup to go up 44-28. Birdwell’s cut to the rim paid off with a quick layup underneath.

TJ Buckner added another second chance layup after pulling down another offensive rebound. Jase Roderick ran a back door cut to success by gaining an easy two through another layup in the paint.

“Those two kids playing well definitely got us to where we needed to be tonight,” Hoese expressed.

Cayden Fillers stepped into the game late and contributed with a layup and a rebound on the defensive end.

South Greene ran away with a 60-30 win over Grainger to get back in the win column and put them back on the right track going into conference play.

“Grainger is good. When we go down there and play it won’t be the same game. They just didn’t shoot the ball very well tonight. They’re well-coached and I know they’ll be ready when we get back down there,” Coach Hoese mentioned.

The Rebels host county rival West Greene on Friday night for a conference opening showdown with the Buffaloes.