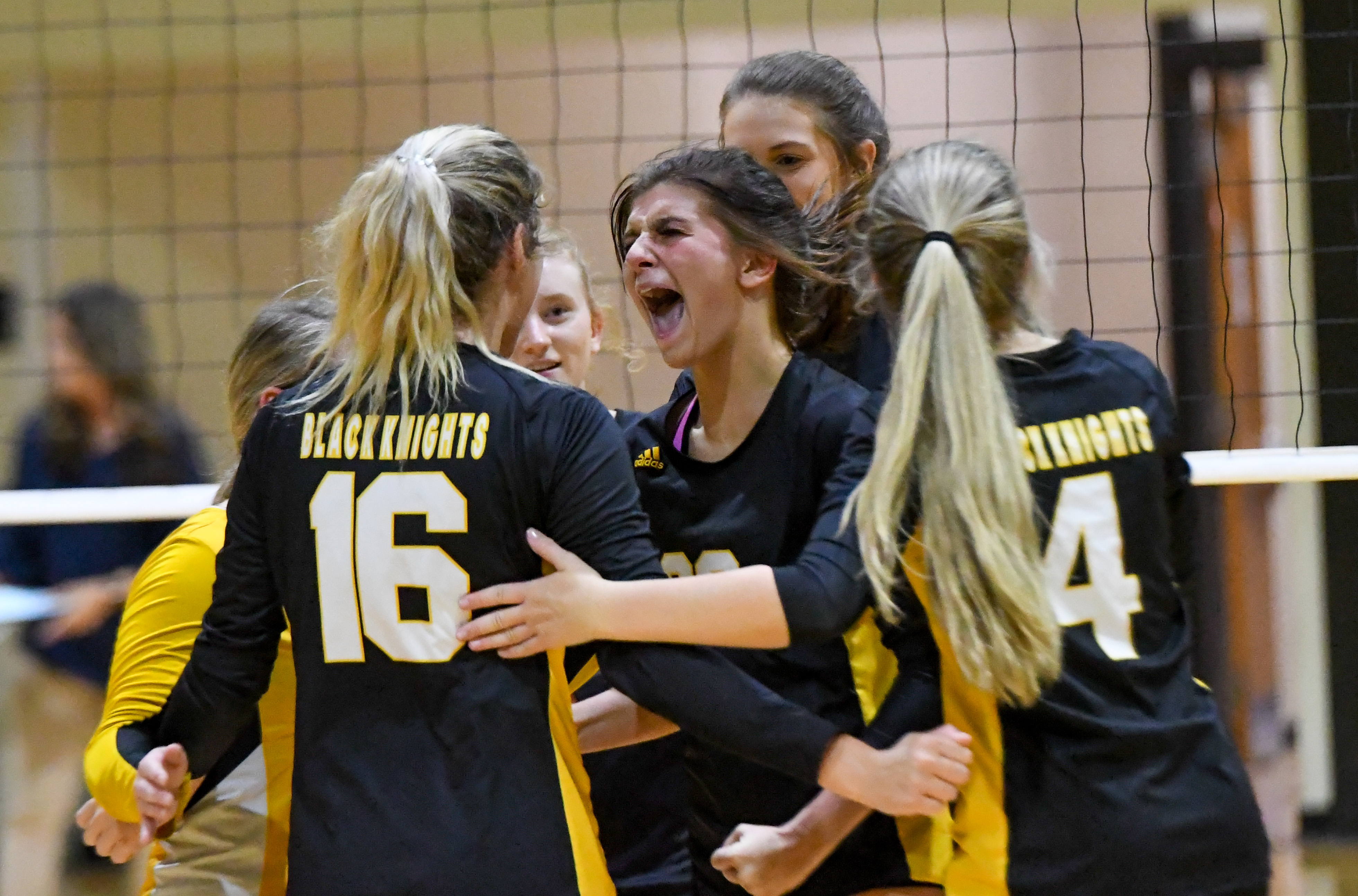 Chuckey-Doak started the night by building a 2-0 set lead, but then watched that slip away as the Lady Buffaloes caught fire. Somehow the Lady Knights regrouped in the final set to open on a big run to that eventually secured the win.

“This was a game of peaks and valleys,” Chuckey-Doak coach Brandi Verran said. “Volleyball is such a momentum game and West Greene is so scrappy that they are hard to beat. But in that fifth set our leaders stepped up and we rose to the occasion.”

It was Addy Pruitt who stepped up big at the service line to get Chuckey-Doak going in the decisive set as she dropped in three aces on the way to an 8-0 lead. Heidi Buch added two kills from the back row in the run while Haleigh Hensley scored on a block and tip.

West Greene would not go away quietly and with Breanna Ellis serving it closed the gap to 9-7. Kinsley Ellenburg got the run started with a kill from the middle. Macy Ricker followed with a kill and Ellis came up two aces.

Hensley got things going again for Chuckey-Doak with a block, and West Greene would not get any closer.

Buch pushed it to set point with a kill and the night ended with West Greene watching a second hit fall to the floor.

“These girls were fighting in those final three sets, they did not want that ball to hit the ground,” West Greene coach Raven Borie said. “But it was tough that the ball that did hit the ground was the game-winning point.”

The evening started with a back-and-forth opening set, but Chuckey-Doak did grab a 7-1 lead out of the gate. Hensley had two blocks and Bailey Fair put down a kill to build the lead.

West Greene came back and closed the gap to 7-6 on an ace by Morgan Brown. The Lady Buffaloes were able to tie things at 8-8 on a block by Ellenburg.

The set had eight more ties and three lead changes on the way to a 23-23 deadlock.

Fair then gave the lead back to Chuckey-Doak with a kill. She then ended the 25-23 win with a sneaky  tip that brought forward the Buffs and dropped safely in the center of floor.

Fair was all over the floor on Thursday and led Chuckey-Doak with 10 kills and 12 assists.

“It’s a huge rivalry any time we play any of our county teams. We came out kind of flat on Tuesday against Cherokee and these girls did not want to do that again,” Verran said. “Bailey is a gamer. She was all over the place tonight and I was saying we just need to get the ball to Bailey. She just had that look in her eyes that you knew she was going to get it done today.”

The second set was dominant effort from Chuckey-Doak as it cruised to a 25-9 win.

The set started with the Lady Black Knights jumping in front 16-2. Hensley, Buch and Fair all had kills in the run.

A kill by Fair and an ace by Hensley pushed that lead to 21-4.

In the closing stretch Faith Yokley had a kill and a block for the Lady Knights.

West Greene refused to go down easy and started the third set on a 5-0 run with Ellenburg serving. After two aces from Ellis and a kill from Morgan Brown West Greene took a 10-2 lead.

Consecutive aces by Kendra Key brought the Lady Knights to within three points at 10-7. A kill and an ace by Fair then brought Chuckey-Doak to within two points at 12-10.

A few errors by the Lady Knights gave West Greene a cushion again. Then Taylor Lawson put down a first-hit kill and Cassidy Hill came up with a block for a 19-12 lead.

Led by Fair at the net Chuckey-Doak made another run and to narrow its deficit to 20-18, but behind kills from Maddie Bryant, Ricker and Ellenburg West Greene secured a 25-22 win.

In the fourth set West Greene took a quick 4-1 lead and then Lawson landed two aces to give the Lady Buffs a 7-2 advantage.

Ellenburg followed with two kills and block as the lead grew to 17-6.

Fair was able to score on two kills and a tip, but Chukcey-Doak never challenged the lead and West Greene forced a fifth set with a 25-11 win.

Ellenburg finished the night with eight kills. Bryant had 17 assists and Morgan Brown had nine digs and two aces for West Greene.

Pruitt had 19 assists for Chuckey-Doak. Buch had nine kills and Hensley had seven blocks.