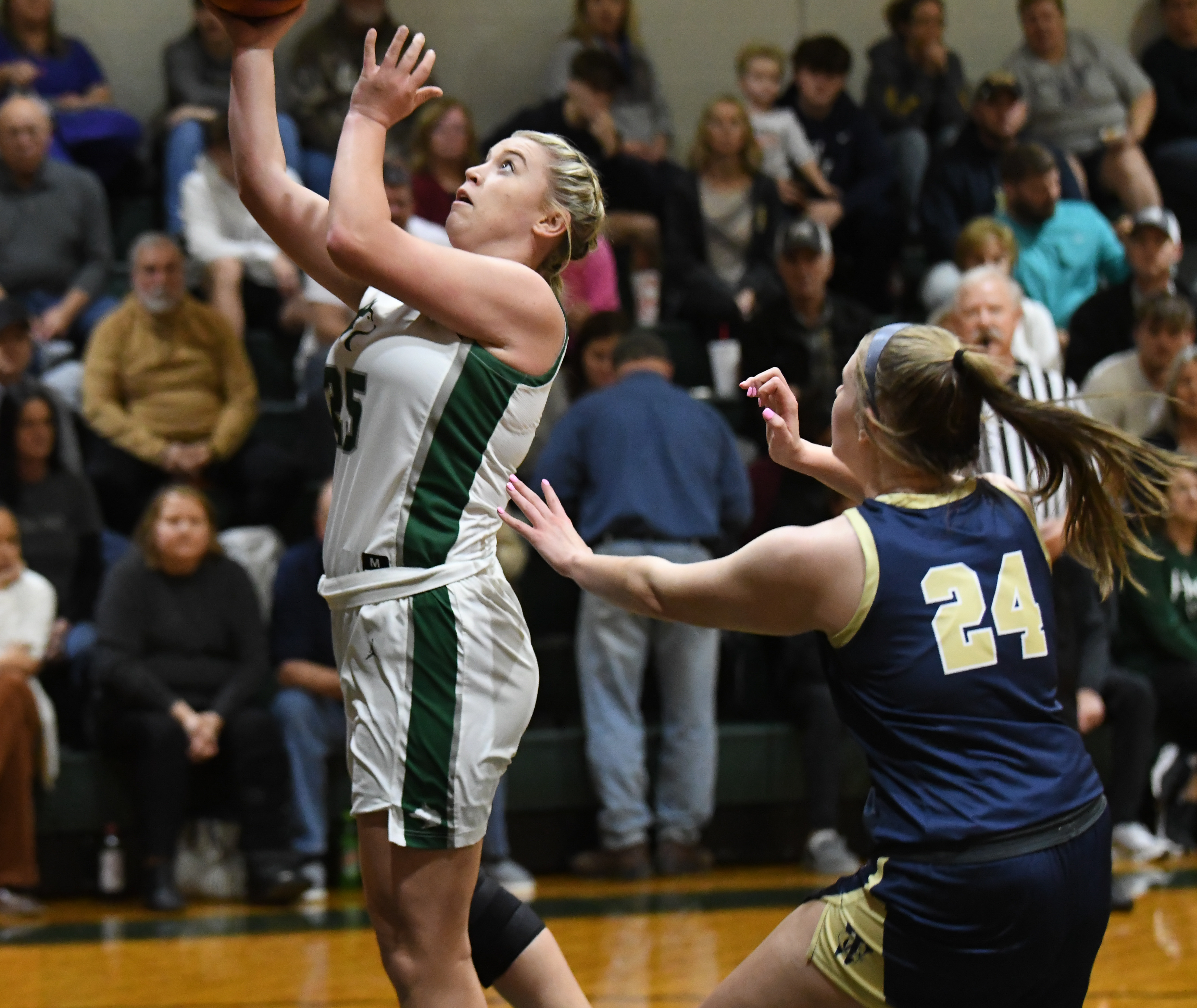 The North Greene girls were able to withstand a hot start by West Greene on Tuesday night, and rally in the second half to earn a 64-54 win.

“Our kids played hard, and when it counted the most we stepped up and started playing,” North Greene coach James Buchanan said. “We held them to two field goals in the fourth quarter. But what we have to do, is do a better job in the first three quarters and not wait until the fourth. I’m proud of them, it was a good night to get a win against a county opponent.”

The night started with North Greene running a full court press and turning over the Lady Buffaloes, but they could not turn enough of those extra opportunities into points to separate.

In the early going Haley Bailey scored four points in the paint while Grace Buchanan hit a three-pointer and turned a steal by Zoe Sanders into two points for a 9-7 Lady Huskies’ lead.

Breanna Ellis sank a three-pointer for West Greene to close the gap to 11-10, and with 3:09 left in the opening period Taylor Lawson put back a miss to tie things at 12-12.

The triples kept falling for the Lady Buffaloes with Ellis hitting two more and Maddie Bryant sinking one over the final minute of the first quarter to put West Greene in front 21-17.

The scoring slowed down in the early portion of the second quarter, but Sonya Wagner was able to score off of steal and an offensive rebound to tie the game at 21-21.

With 2:30 left in the first half Wagner sank a step-back triple to put the Lady Huskies in front 28-27.

Over the final two minutes of the first half West Greene’s Kinsley Ellenburg began to go to work. First she sank a pair of free throws and then she dropped in trey from the left wing. She ended her 9-0 run with four points from the block to give West Greene a 36-28 lead.

Wagner scored the final points of the first half, but West Greene held a 36-30 lead.

West Greene made seven three-pointers in the first half, and nine in the contest.

North Greene’s defense improved in the second half and that allowed it to gradually pull back into the contest. Sanders got the second half started by driving to the lane through contact and earning three points the hard way.

Bailey put the Lady Huskies in front at 39-38 when she made good on an old-fashioned-three-point play.

Ellis got the lead back for West Greene with a three-pointer, and the Bryant banked one in from behind the arc to put the Lady Buffaloes on top 44-41.

Buchanan tied the game for North Greene with a three-pointer on the other end, and Wagner sank a triple from the left side to give the Lady Huskies a 47-44 lead. North Greene took a 47-46 lead into the fourth quarter.

Madi Brown made a pair of free throws in the first 14 seconds of the fourth quarter to give West Greene its last lead at 48-47.

North Greene answered with an 11-2 run to take a 61-52 lead. In that stretch Wagner scored five points, Bailey had four and Sanders three points.

The Lady Huskies got a balanced offensive effort on Tuesday with four players in double figures. Wagner led the way with 23 points, Bailey had 19, Buchanan 11 and Sanders 10.

Ellenburg led West Greene with 16 points while Ellis had 13 points.