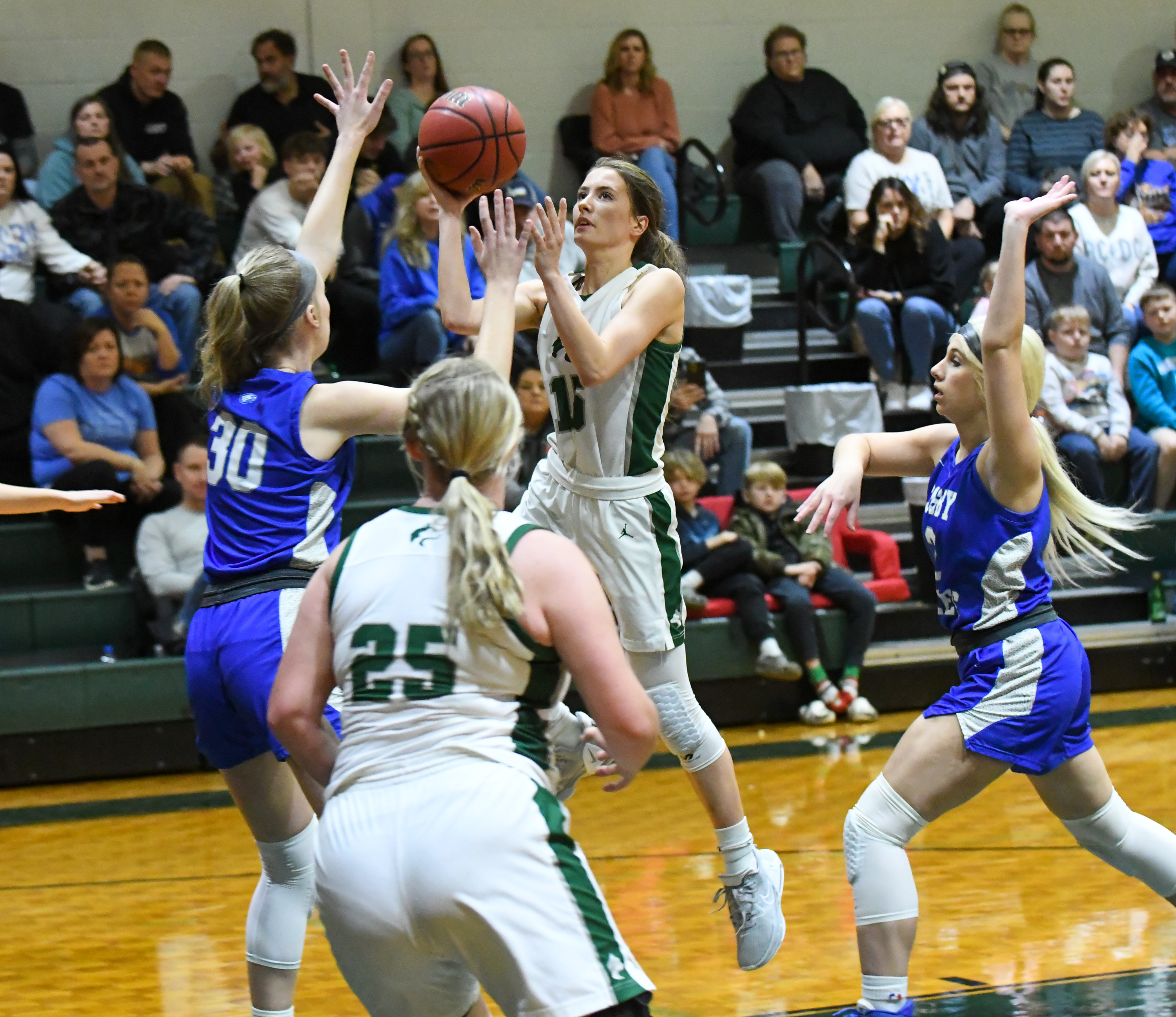 It took one quarter for the North Greene girls to figure out what they needed to do on defense, but once the Lady Huskies got locked in they shut down Cosby on the way to a 60-25 victory Monday night.

“After the first quarter our kids guarded them about perfect,” North Greene coach James Buchanan said. “Now it the first quarter it looked like both teams were ready to score 100. But then we began to help off the right people and were paying attention to the right people. We were moving our feet and playing defense without fouling. I was really proud of that effort.”

Monday’s first quarter saw both offenses getting just about whatever they wanted with only a handful of combined stops between the two teams. The result was a narrow 20-17 North Greene lead, but after that the Lady Huskies allowed just eight points the rest of the way.

“We really challenged Haley Bailey in our film this morning and she answered the bell defensively,” Buchanan said. “She was aggressive, and she continued to move. She was ready to get physical and was willing to battle on the block tonight. I felt like that made a big difference defensively.”

There were eight lead changes in the opening quarter with Zoe Sanders scoring eight points for North Greene while Ariel Ottinger and Kinley Coggins each scored six points for Cosby.

The three-point shot proved important for North Greene early on as a deep strike from Grace Buchan put the Lady Huskies in front 11-9.

With 1:20 left in the first quarter Sanders sank a triple to put the Lady Huskies on top 17-14. Then with six seconds left Sonya Wagner took an inbound pass, drove the lane and dished to Sanders for a trey that put North Greene in for good as the opening frame came to a close.

Just over a minute a into the second quarter Coggins, the Lady Eagles’ best player, went down with a knee injury and did not return to the game. Without her Cosby’s offense stalled while at the same time North Greene stiffened its defense. The Lady Eagles were held without a field goal in the second quarter.

On the other end of the floor North Greene’s offense was not quick to take advantage of the situation, but Haley Bailey scored five points to stretch the lead to 25-19.

Sanders finished the first half with a put back through contact that turned into three points and a 28-19 lead at halftime.

In the third quarter North Greene’s offense began to find its rhythm and it started the period on a 16-0 run.

Wagner got things started by coming around a screen by Cambell Gaby and knocking down a three-pointer. She then went the length of the floor for a floater and a 33-19 lead.

Gaby, Bailey and Buchanan all followed with three-pointers for North Greene as the lead grew to 44-19.

Cosby’s Shylee Shelton broke the streak with a three-pointer. It was the Lady Eagles first field goal in 14:18 of game play.

Ali Smith made a free-throw for Cosby 15 seconds into the fourth quarter, but then North Greene held the Lady Eagles scoreless the rest of the way.

On offense Wagner and Heidi Harmon each scored from behind the arc while Gaby and Bailey scored in the paint on the way to a 60-25 win.

Wagner led North Greene on Monday with 18 points while Sanders and Bailey each scored 12 points.

Prior to Monday’s contest North Greene honored the family of longtime assistant coach Randy Bailey who passed away in the fall prior to the start of the season.

“It was the first time his family was able to get out to a game, and I know that this time has been a struggle for them,” Buchanan said. “It hurt a lot people knowing that Randy is not around anymore, but we know where Randy is at, and we can celebrate that we will get to see him again. It was great to see how supported his parents were tonight, and we wanted to take a chance to say a little bit about Randy. It’s been a struggle without him, but he’s still with us in our hearts and our minds.”

The North Greene boys struggled with the defensive pressure Cosby applied on Monday, and never could put together the offensive sequences necessary to win. As a result the Huskies fell 66-61 in what coach Sam Tarlton described as maybe his most frustrating game leading the Huskies.

“Until some guys in that locker room try to execute what I’m telling them to do, we are not going to be very good,” North Greene coach Sam Tarlton said. “We played how we practiced this morning. I’m very disappointed with how we played and maybe a lot of it is my fault. Hopefully I can have them ready to go by Friday. Right now we have bunch of JV players playing in the 8:30 game, that’s the best way I can put it.”

The game stayed close the entire way, but seemingly every time the Huskies had a chance to separate the Eagles made the plays needed on defense to reel them back in.

The night started with the Huskies taking a quick 7-3 lead, but then Cosby big man Jayston Fine sank a triple and followed it with a layup.

North Greene went up 12-8 when Jason Britton returned the ball to Sam English on an inbound play that resulted in a three-pointer from the corner.

Britton then set up Bennett McLain for a pair of buckets as the Huskies took a 16-14 lead into the second quarter.

Cosby’s Slate Shropshire started the second quarter by driving to the rim to tie things at 16-16. Cyler Davis then gave the Eagles a 20-18 lead when he stole the ball on one end of the floor and took it the other way for a breakaway layup.

Britton tied the game at 22-22 when he powered in a layup from the right block, but on the trip the other way Peyton Raines knocked down a three-pointer for Cosby.

With three seconds left in the first half North Greene was able to regain the lead when Britton came down the baseline for a layup that turned into three points and a 30-27 advantage.

Britton started the second half with a with a three-pointer that extended North Greene’s lead, but then the miscues began to mount for the Huskies. They went three minutes without scoring, and at the same time Cosby got triples from Paxton Coggins, Cruz Coggins and Fine to take a 40-33 lead.

Lance Carrico got North Greene going again with a triple from the top of the key and Britton tied the game at 40-40 with a pair of free throws.

The Huskies went into the fourth quarter leading 45-44 after Britton took a baseline inbound pass and laid it in just before the horn.

Britton did his best to keep North Greene in front in the final frame with 11 points in the first five minutes as the Huskies held a 56-53 advantage.

Some of North Greene’s most costly mistakes followed, and throw aways on consecutive possessions led to layups by Davis and Shayden O’Dell as Cosby took a 62-59 lead.

Britton led all scorers with 33 points while McLain put in 13 points for the Huskies.