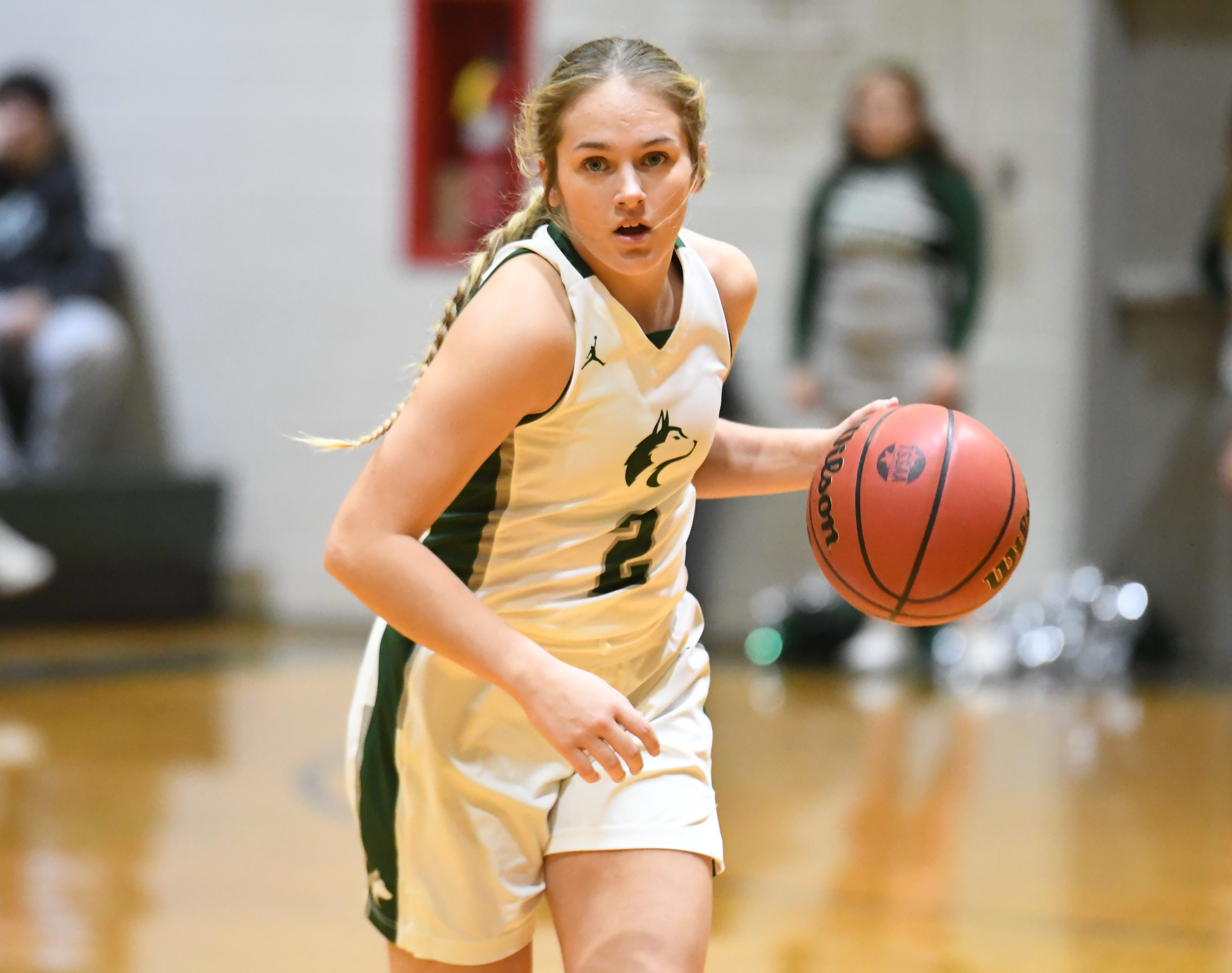 STONEY CREEK - The North Greene girls fought tooth-and-nail and pulled out a gutsy 39-36 win on the road over Unaka thanks to more late-game heroics from Sonya Wagner.

“We’re proud of them for pulling it out again. I guess we’re just determined not to let anything come easy,” North Greene Head Coach James Buchanan said. “To close this one out on the road was big.”

A three-point dagger from Wagner with 30 seconds left regained the lead for North Greene and a great defensive stand on Unaka’s next possession put the ball in Wagner’s hands again for the final free throw that sealed the deal.

“You think about the Cosby game she hits a big one to get it into double overtime, she hits the big one to beat Chuckey-Doak, and she’s making it a habit of just taking and making some big shots for us. We’re happy for her,” Buchanan stated.

Up to that point, the senior had only scored two points but made the most of her night when it counted by helping the Lady Huskies pick up a much-needed win on the road to improve to 2-2 in the conference standings.

The Lady Rangers were a tough match in their home gym with leading points scorer Lyndie Ramsey scoring 24 of her team’s 36 total points. A spin move along the baseline resulted in a bank shot that netted Unaka’s first two points of the night.

Haley Bailey banked in a layup off the glass on a quick inbounds set to tie the game. She would end the night leading the Lady Huskies with 13 points.

“I think that she’s going to continue to get better, but tonight was big for her,” Buchanan expressed.

Ramsey fired away from long range next and got a three-pointer to fall from behind the arc.

Cambell Gaby and Zoe Sanders gave the Lady Huskies a 6-5 lead with back-to-back layups in the paint. Grace Buchanan sent a three-point bomb through the net in transition and Sanders laid the ball off the glass again to add to their lead.

North Greene held a 12-7 lead at the end of the first quarter.

Both teams traded layups again with Gaby and Ramsey being the ones to knock them down.

Unaka pulled their way back into the contest starting with mid-range buckets from Ramsey and Katlyn Dugger.

Lyndie Ramsey let the clock run down all the way to the last few seconds and nailed a running floater before the buzzer sounded to send the Lady Rangers into the break with a 17-16 lead.

Zoe Sanders and Haley Bailey perfected a pick-and-roll play to give North Greene the lead starting the second half.

Jill Faust landed a three-pointer through the net to swing the lead back into Unaka’s favor.

Sonya Wagner tied the game at 20-20 with a layup in the paint and Cambell Gaby broke the tie with an offensive put back on the following possession.

Haley Taylor drove through the paint and was fouled after making a layup, but missed the opportunity to regain the lead at the charity stripe. Lyndie Ramsey broke the tie after taking it upon herself to grab a rebound and sprint coast-to-coast for a layup.

Cambell Gaby sank two free throws at the line towards the end of the third. Gaby finished with ten points and scored five of those in the third quarter.

“It was good to see her get into double figures tonight and I think she’ll be ready moving forward to do that more often for us,” Buchanan said.

That lead would quickly wash away with Lyndie Ramsey taking control of the game hitting a three-point bucket from the top of the key. Her quick hands on defense led to a steal that resulted in a wide-open layup at the other end. A mid-range bucket from Ramsey capped off a 7-0 run and had Unaka back in front 31-27.

Haley Taylor sank a big three-point bucket with just a little over two minutes left to keep the lead at four points.

Coach Buchanan would call a timeout to talk things over with his team. The timeout worked in their favor as they had the opportunity to set Grace Buchanan up in the corner with a huge three-point bomb to pull the Lady Huskies back within one. Haley Bailey went a perfect two-for-two at the free throw line to put North Greene back out in front.

Keyona Hague only scored two points all night but got a layup to fall at the most opportune time with less than a minute left to put Unaka ahead 36-35.

Sonya Wagner had a tough night scoring with only two points up to this point. Her shots weren’t falling, but when her name was called to provide her team with another big shot in another big moment she delivered. A three-point dagger from the senior with 30 seconds remaining put the Lady Huskies back in the driver’s seat.

On the following trip down the court, North Greene would get the stop they needed with Lyndie Ramsey missing a layup attempt in the paint. The ball was rebounded by the Lady Huskies and they did a great job moving it around milking as much clock as possible with the Lady Rangers chasing them around.

With 2.3 seconds on the clock, Wagner knocked down the first free throw. The second one would miss off the front iron but Unaka wouldn’t get a shot up as North Greene survived another close call to escape with a 39-36 conference victory on the road.

“I thought when we got down four, we were in big trouble because we were running out of time. Grace hit a big three to get us within one. We’d get a stop, a much-needed stop, after we had a very patient possession. Sonya came down and was able to knock down another big one,” Buchanan mentioned.

Lyndie Ramsey poured in a game-high 24 points for Unaka.

The result was not what North Greene hoped for, but history was made on Friday night as Jason Britton broke his own North Greene High School single-game record dropping 56 points in an 84-75 loss to Unaka.

After conferring with other local media, the 56-point performance is also a new Greene County single-game record in boys competition. The 50-bomb that Britton dropped shatters his own single-game record of 43 points set against Hampton at home last season.

“What a player,” Tarlton expressed. “You can say a lot of things about Jason but one thing you can say is that he’s going to play hard. He tried to will us and put us on his back tonight.”

The night started rough for the Huskies with Unaka jumping out to a quick 10-0 lead that forced them to play behind the eight ball all night.

Landon Ramsey scored five-straight points with a three-point basket in the corner followed by a layup. Mason Wilson stripped the net for a three-pointer next.

“We expected them to play hard and any time you come in here you’re prepared for a dog fight,” Huskies Head Coach Sam Tarlton said.

Jason Britton got to work soon after and started willing his team back from an early deficit. A step back three-pointer from beyond the arc started his night. Britton scored seven in-a-row for North Greene and ended the run with a pull-up at the free-throw line. The junior found Bennett McLain cutting to the basket for a layup underneath. Britton managed to cut the Rangers lead down to 16-12 with another three-pointer from downtown.

“It was great hitting my first couple of shots and it just kept me rolling, but we couldn’t get any stops on defense so it really didn’t matter,” Britton said. “You just got to put your head down when you’re down that much and just take over.”

Ramsey caught a lob pass and put it off the glass for an athletic layup on an inbounds play.  He finished strong at the rim again with an and-1 bucket to increase the Unaka lead to 21-14.

Brody Franklin stepped off the bench to add a layup for the Huskies.

Joe-Z Blamo gathered a loose ball at mid-court and made his way inside the perimeter to knock down a mid-range shot before time expired to put the Rangers ahead 24-16 after eight minutes played.

Jason Britton began the second quarter with a catch-and-shoot triple and scored a layup to cut it to 24-21.

Luca May provided a layup for the Huskies.

Mason Wilson’s three-point shot was wide right but hit the glass at just the right angle to fall through on a banked triple. Sam English responded with a three of his own before Wilson came right back to splash another trey to give the Rangers their largest lead of the night so far at 43-29.

Britton drained a mid-range bucket as time expired, but Unaka still held on to a 45-32 lead going into the half.

English and Britton completed two fast break plays with layups to cut the lead to 47-40.

Landon Ramsey caught the ball in the low post and rose up to nail a one-handed jumper off the glass.

An intercepted pass by English led to Jason Britton laying the ball in. Britton’s next bucket came in the mid-range with a pull-up jumper.

Ramsey charged through the lane for a layup to keep Unaka’s engine running.

Britton did his best to will his team back with two layups that cut the score to only four points.

Jason Britton scored 19 of North Greene’s 23 points in the third quarter, but they’d still trail 59-55 heading into the final quarter of play.

Joe-Z Blamo kissed the ball off the glass for a layup to begin the final eight.

Britton was fouled on his way up on a three-point attempt and nailed all three at the line.

After a sloppy possession by the Rangers, they still somehow managed to get the ball to Wilson for a three-point make.

Lawson Davenport out-jumped everyone in the paint and grabbed a big offensive board. He’d dish it off to Britton for a floater in the lane.

North Greene managed to cut the lead down to just two points before Landon Ramsey got fouled on a layup and completed a three-point play at the line to boost their lead up to 71-66.

With time winding down, Britton came right back with a pick-and-pop three to give the Huskies hope.

Their hopes would be dashed away as Joe-Z Blamo took over in the final minute with two layups on back-to-back possessions to give the Rangers a 77-69 lead.

Jason Britton did all he could in the final minute with a late three-point bomb from way downtown and three free throws after being fouled on another attempt from beyond the arc.

Blamo sealed the deal with another layup in the paint. He scored seven points in the final minute of the game.

Unaka led wire-to-wire and went home with a 84-75 win over the Huskies to give them their first conference victory of the season.

“I told them in the locker room we can either use this to propel us where we want to go or they can lay down and quit, so we’ll see. I don’t know which one it’s going to be. But I challenged them,” Tarlton said.

Landon Ramsey scored a team-high 35 points for the Rangers. Joe-Z Blamo provided 20 points including 13 in the fourth quarter. Mason Wilson contributed with 18 points.

Jason Britton had the night of his life scoring 56 points while setting the new single-game scoring record for North Greene.

“He came up to me at one point and said ‘I at least got to have 40’ and he was just joking and I said ‘well we’re going to need you to get 50’ but 50 wasn’t enough. He’s a great player,” Tarlton mentioned.