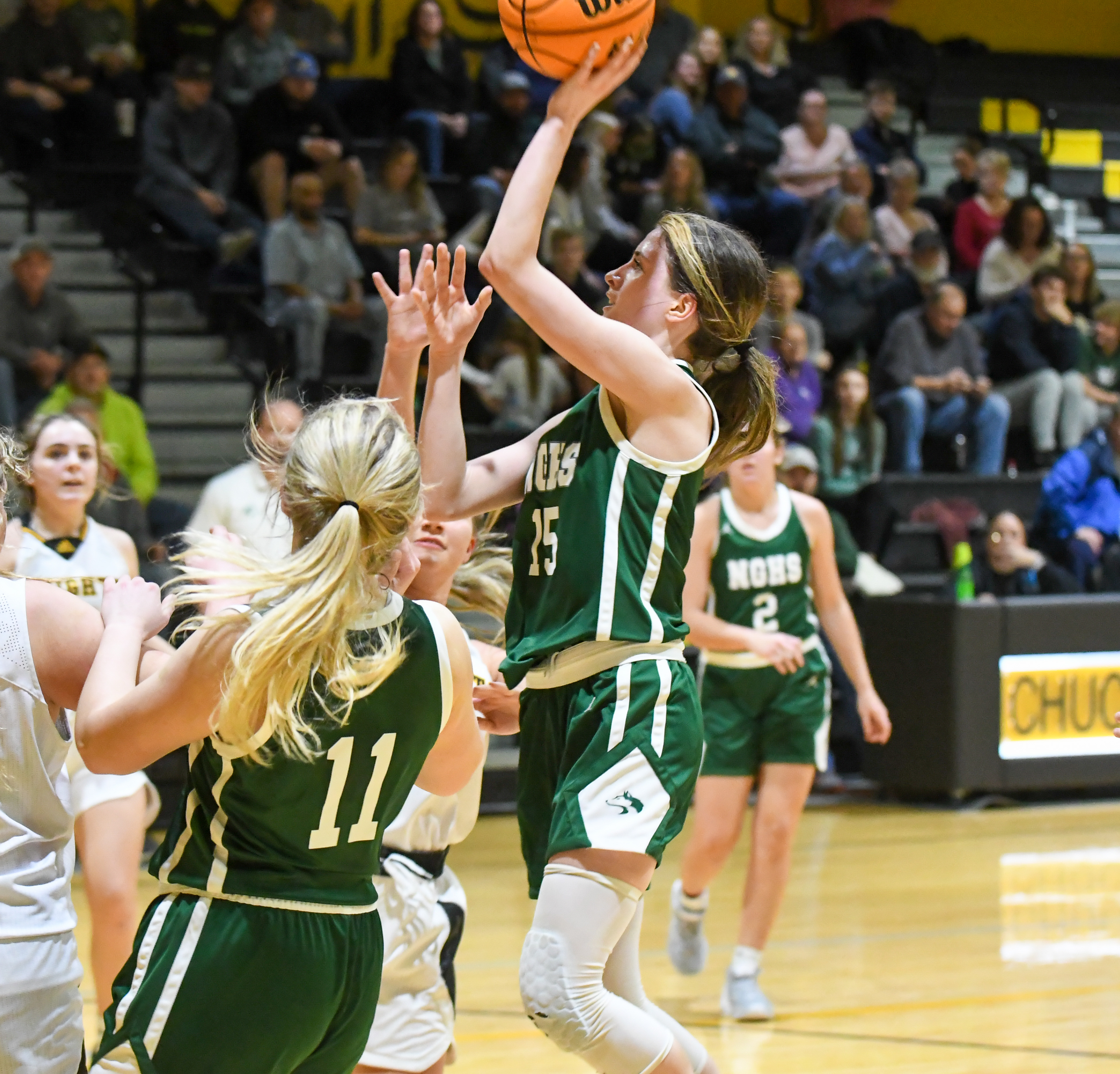 For three quarters the North Greene girls felt like there was a lid on the basket on Tuesday night, but the Lady Huskies never stopped fighting and erased a 16-point, fourth-quarter deficit to top Chuckey-Doak 40-39.

“That’s a very much improved Chuckey-Doak team,” North Greene coach James Buchanan said. “They forced us into some bad shots early and we shot the ball terrible. But these kids just did what they have done all year, when everybody counts them out, they start to make some plays. I’m proud of these girls. I know things are not what they could be physically, but they keep fighting.”

The final frame started with the Lady Black Knights leading 31-17, and that margin quickly grew as Tavyn Southerland sank a jumper from the left wing. Chuckey-Doak played from comfortably in front to the 3:25 mark when Southerland hit another jumper that made the score 37-24.

North Greene responded with a 13-0 run that tied the game at 37-37. Sonya Wagner started the stretch with a free throw, and before the ball could get back across half court Haley Bailey stole possession and set up Wagner with a layup through contact that turned into three points.

Wagner led North Greene on Tuesday with 20 points, and 11 came in the fourth quarter.

Zoe Sanders pulled up for a runner from the elbow and then Wagner took a rebound coast to coast to make the score 37-34.

While North Greene’s offensive awakening gave the Lady Huskies a chance, on the defensive end they were able to get stops and took advantage of the Lady Knights misses.

With 29 seconds left North Greene was able to tie the game. After Sanders stole an inbound pass coach Buchanan called a timeout. Out of the break the Lady Huskies set up Grace Buchanan in the corner for a three pointer that fell through to make the score 37-37. Buchanan had struggled from behind the arc to that point in the contest, but North Greene liked the matchup out of the timeout and felt good about the senior making the big shot.

“They had been playing a 2-3 zone on out of bounds plays, and then switching to a man,” coach Buchanan said. “The girl that was guarding Grace was at the top of the zone. We felt like if we ran Grace to the corner that was a lot of ground for her to cover. Grace hadn’t shot it well, but I kept telling her, ‘You’re going to make a big one’, and she made one of the biggest ones she’s ever taken.”

Chuckey-Doak wasted little time regaining the lead as Taliah Johnson ran the length of the floor for a layup nine seconds later.

Then on the trip the other way Wagner pulled up in transition for a triple that gave the Lady Huskies the last lead of the night.

The Lady Black Knights had one last chance, but North Greene’s Cambell Gaby made a stop in the paint to seal the win.

“This shouldn’t surprise me, because they have done it all year, but their resilience has been amazing,” Buchanan said. “The girls have picked the word persevere to use as our theme for the rest of the season. We have faced a lot of adversity, but we are just carrying on. We are building on the positives and learning from the negatives. This team is so special to me because of what they are giving.”

Tuesday’s action started with Chuckey-Doak leading 12-7 after one quarter of action. Johnson and Saniah Atchison both connected from behind the arc for the Lady Knights in the period.

Neither offense got much going in the second quarter, with Sanders sinking North Greene’s lone field goal. Adyson Ripley and Kylie Malone both connected on mid-range jumpers for Chuckey-Doak on the way to 19-13 halftime lead.

Behind four points from Ripley the Lady Knights lead grew to 25-14. Courtnee Jones then scored the final four points of the third quarter to push Chuckey-Doak’s advantage to 31-17.

Chuckey-Doak’s Christian Derry set the tone in the paint early on Tuesday which helped the Black Knights hold off a late scoring outburst from North Greene’s Jason Britton on the way to a 66-52 win.

“I couldn’t be proud of this group, it’s hard to beat a team three times,” Chuckey-Doak coach Sam Broyles said. “I’m just glad we came out with a win. Christian was huge, they couldn’t do anything with him, even with three packed in the paint. Then we had other guys step up, and we have to have that as we start playing three games in a week.”

Derry scored five points in the first 1:30 while clogging the paint on the defensive end to help Chuckey-Doak jump out to a 9-0 lead.

Britton got North Greene going with a step-back jumper, and he scored eight points in the first quarter. For the Knights Ethan Grindstaff, Luke Myers and Isaiah Treadway all scored on breakaway layups to give Chuckey-Doak a 15-8 lead after one quarter of play.

Derry and Dillon Shelton got the second quarter started by scoring from opposite sides of the lane to push the lead to 19-10.

The lead grew to 25-14 after Derry put back a pair of misses,  but then Britton went 3-for-4 on two trips to the charity stripe.

Britton followed that with a three-pointer from the left side, and Sam English closed the first half by going coast to coast for a lay in that cut Chuckey-Doak’s lead to 27-22.

The second half began with Derry scoring on a trio of offensive rebounds and Cadin Tulloch sinking a corner three to stretch the lead to 36-24.

Tullock and Brasen Murvin turned turnovers into points and the Knights held a 45-28 lead going into the fourth quarter.

Britton did his best to bring North Greene back in the fourth quarter, and while he scored 16 points in the period the Huskies could not make enough stops to put a dent in the lead.

While Britton finished the night with 34 points, Chuckey-Doak allowed only five Huskies to score on Tuesday. Bennett McLain put in 11 points and the other three North Greene players were held to four points or less.

“It’s crucial to try to slow down their other guys, because you know that Britton can score,” Boryles said. “I thought we did a good job on him too, he may have ended up with 34 but a lot of that was late.”

Derry led Chuckey-Doak with 21 points while Tullock put in 13 points.