Lady Huskies Battle Back, But Cosby Prevails In Double Overtime 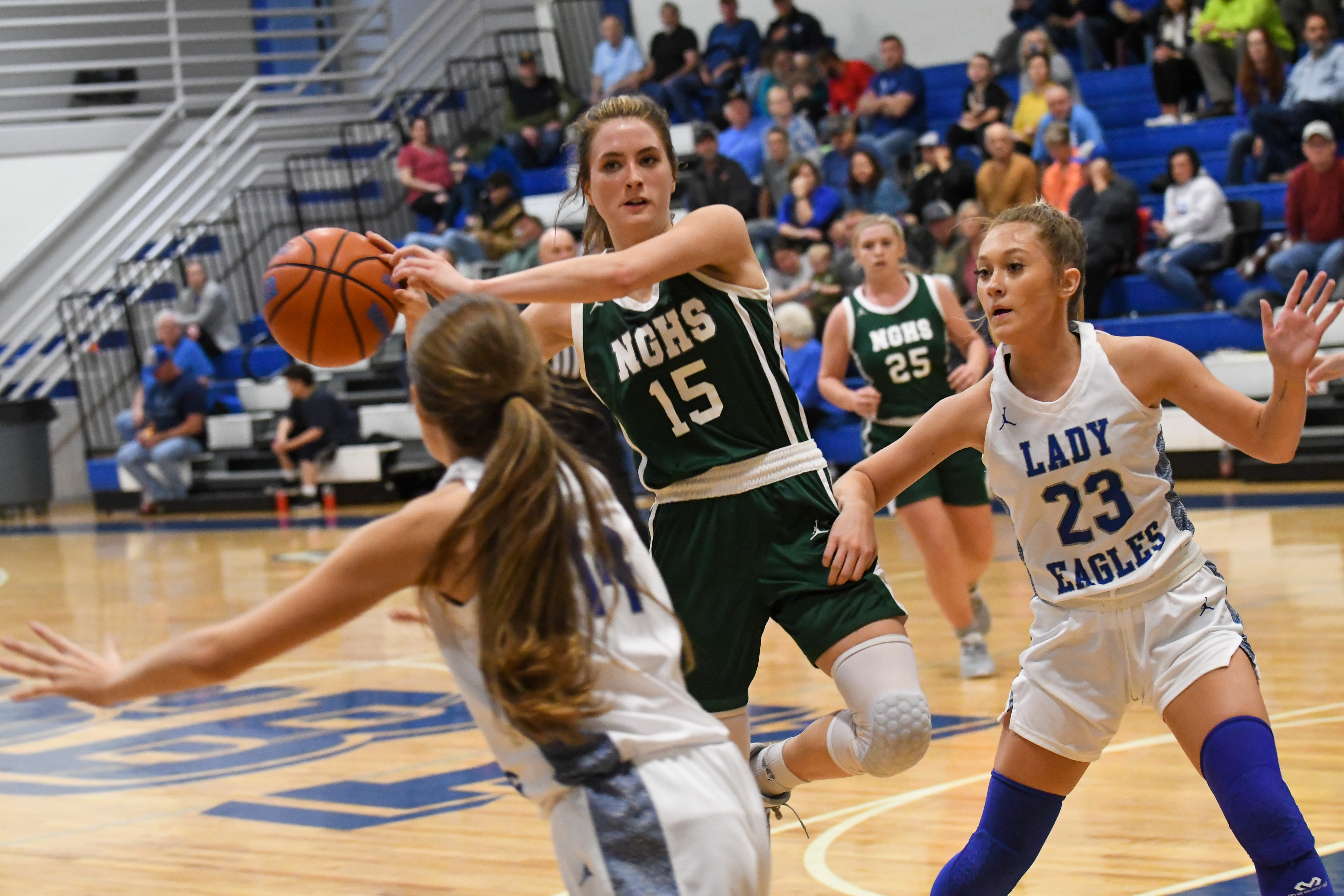 Lady Huskies Battle Back, But Cosby Prevails In Double Overtime

COSBY – The North Greene girls never quit fighting on Thursday night, but they came up on the short end of a double-overtime battle with Cosby, falling 64-61.

“It just feels like if it can go wrong, I think it’s going to go wrong. Foul trouble, injuries, and let’s not kid ourselves, we played poorly in the first half,” North Greene coach James Buchanan said. “A lot of teams might take this opportunity to make excuses and throw in the towel, but we’ll wake up tomorrow and fight again. This team is going to work hard and try hard. We got down 24-12. It seemed like we couldn’t make a shot, and we challenged them at halftime. They accepted that challenge, but now we have to figure out how to do it for four quarters. But with the fight they showed tonight this is the type of team I want to go to battle with.”

The Lady Huskies struggled to get shots to fall in the first half and went into half time trailing 24-12, but they kept battling and gradually chipped away at Cosby’s lead in the second half.

“We had a few good shots, but I thought we were too hesitant,” Buchanan said. “Part of it is being uncomfortable in a new environment. None of these kids have played down here. We came out a little shell shocked maybe, and you can’t do that.”

The Lady Eagles started the second half with a three-pointer from Kinley Coggins to put North Greene in a 15-point hole before it began to dig its way out.

North Greene got a pair of buckets from Haley Bailey to close the gap to 29-21. Then with 44 seconds left in the third quarter Sonya Wagner drove the lane and rolled in a layup through contact. Bailey stole possession back before the ball crossed half court and Cambell Gaby came up with a layup that cut Cosby’s lead to 32-26.

The Lady Eagles went to the fourth quarter leading 34-26 after Shylee Shelton hit a jumper at the buzzer.

During the third quarter Zoe Sanders, North Greene’s starting point guard, reinjured an ankle that has kept her sidelined since the opening night of the season, and the Lady Huskies were forced to go the rest of the way without her.

Wagner got the fourth quarter started by knocking down a jumper from behind the arc and then turning a runner through contact into three points to close the gap to 34-36.

With 4:45 left in regulation Bailey got three points the hard way for North Greene to make it 38-37.

Bailey then tied the game at 41-41 with 17 seconds left when Wagner found her open on the block.

Cosby’s Katie Myers was fouled going up the floor and put the Lady Eagles back in front at 43-41. Bailey tied the game again with four seconds left, and then Cosby could not complete the inbound pass which allowed North Greene a chance to win it in regulation. Wagner drove the lane and drew contact, but no whistle followed, and the game went to overtime tied at 43-43.

In the first overtime Cosby built a 53-48 cushion when Shelton drained a straight away trey.

Another stop allowed Gaby to give North Greene the lead with 45 seconds left to play.

Cosby went in front again at 57-54 after a layup by Alexis McGaha and two free ones from Ali Smith. Wagner came up big once again and pulled up for a trey on the left wing. The bomb tied things up at 57-57 with five seconds left and added four more minutes to the clock.

“Sonya is a special kid, she kept making big plays and making the right shots,” Buchanan said. “She got us back in it, and I thought she and Haley Bailey both played outstanding in the second half. They gave us a chance to win.”

Ella Head got the Lady Huskies started in the second overtime with an offensive rebound and a layup that gave them a 59-57 advantage.

North Greene played from in front until the 24-second mark when Smith stole the ball and took it the other way to give Cosby a 62-61 lead.

The Lady Huskies final chance came with nine seconds left when Bailey put up a shot in the paint, Ali Ottinger closed in hard and got her hand the shot. Many of the Husky faithful thought her body also collided with Bailey’s, but the whistles were silent and the Lady Eagles went the other way with ball.

North Greene had to play the last 1:31 without Wagner after she fouled out.

Wagner finished the night with 26 points to lead North Greene while Bailey had 18 and Gaby put in 13 points.

Thursday’s first quarter was mostly a showcase of Shelton’s scoring ability as she put in 11 points and Cosby took a 13-3 lead. North Greene did not make a field goal for the first 7:54 of the game.

In the second quarter Wagner scored five for the Lady Huskies and Gaby put in four points, but Cosby’s lead grew to 24-12.

Shelton led Cosby on Thursday with 31 points while Smith had 12 and Coggins put in 10.