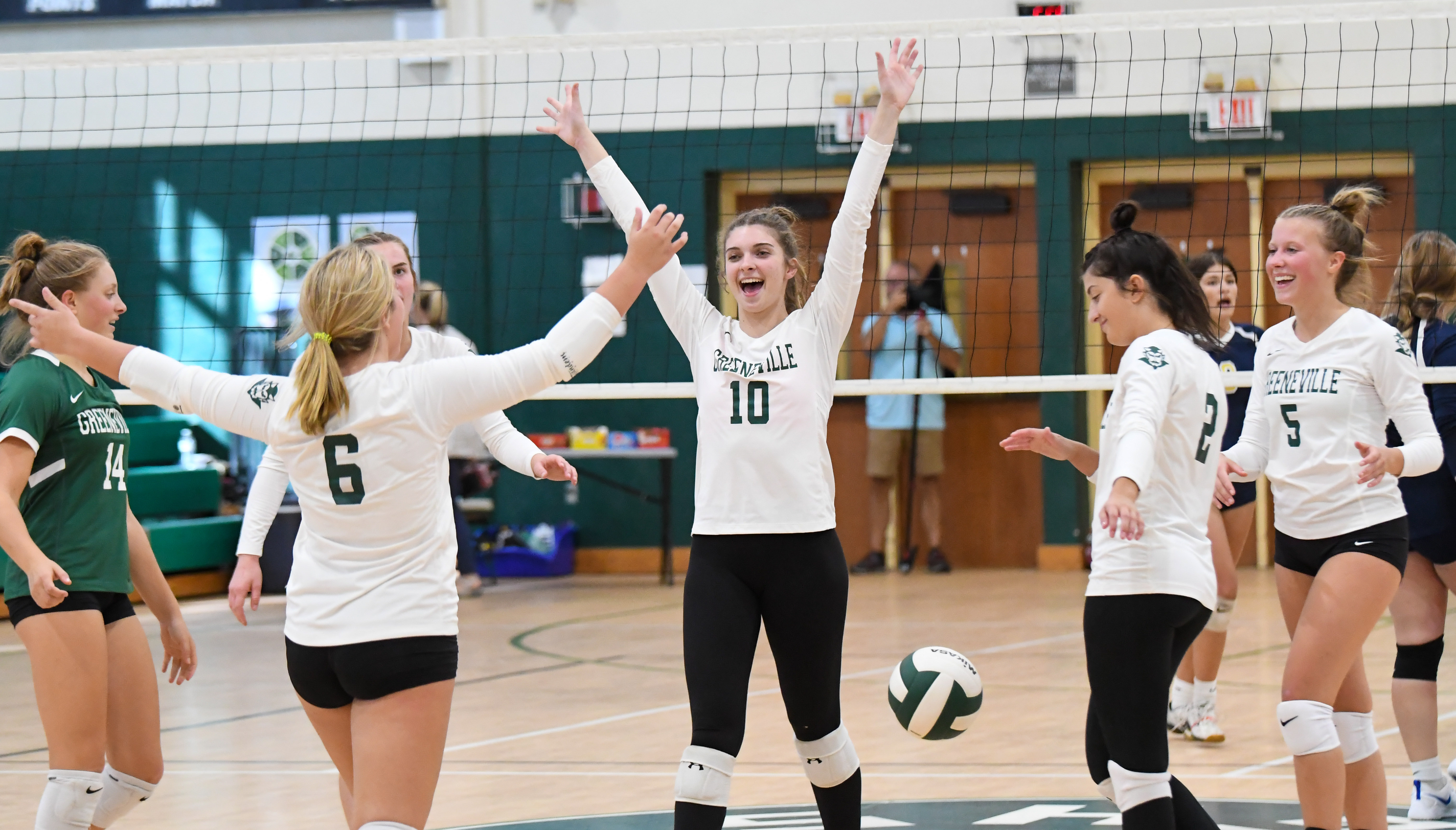 Greeneville Volleyball coach Sara Aiken saw a lot of things that her team needs to clean up on Tuesday, but came away proud that her squad was able to stay perfect in District 2-AA play with a sweep of West Greene, 26-24, 25-6, 25-23.

“West Greene is a really good defensive team, and they have come a long way offensively. Then on top of that errors will get you,” Aiken said. “In the that second set there were many fewer errors, and I felt like that offensive play is what our team is. That was a really smooth, fluid look at what we can be, we just have to do it every time.”

West Greene went on the attack early in the first set and quickly put Greeneville in a 5-0 hole. Kinsley Ellenburg and Morgan Brown each put down kills in Madi Brown’s opening service run.

Lauren Bailey broke the run with a slam from the middle and Chloe Marsh followed with three kills from the left side to close the gap to 6-5.

Marsh then rolled a kill down the net to tie things at 7-7 and Greeneville briefly led at 8-7 on an ace from Lanna Click.

With Macy Ricker at the service line West Greene took advantage of a series of missed kill opportunities by the Lady Devils and moved in front 13-9.

Greeneville tied the set again at 15-15 on consecutive kills from Bailey.

The Lady Devils took the lead for good on a service run from Hannah Gray that included two aces that put Greeneville in front 20-17.

“Hannah’s float serve is like a knuckleball, and then it drops too,” Aiken said. “It drops at different times, at different depths, and her serve percentage is getting better and better. Of course more aces helps that, and she is doing a great job.”

Marsh sent a kill down the left side line to give Greeneville a 24-21 lead, but three straight miscues brought West Greene even at 24-24.

The set finished with a block from Bella Devoti and an ace from Marsh for the 26-24 win.

The second set was all Greeneville as the Lady Devils ran away to a 25-6 win.

The Lady Devils took advantage of West Greene errors to build a 6-1 lead and then got kills from Devoti, Bailey and Gray to go in front 9-2.

Bailey made the score 14-2 when she crushed a kill off the head of Morgan Brown. Bailey led Greeneville on Tuesday with 11 kills, five blocks and five digs.

“Lauren is bouncing balls off of people and sending them into stands, and that builds momentum on our side,” Aiken said. “That’s big stuff.”

Gray then went on an eight-point service run that saw Bailey score on a block and kill while Eden Aiken dropped in a tip for a 22-4 lead.

Madi Brown started the third set with an ace as West Greene grabbed a quick 3-0 lead.

Greeneville answered with kills from Kyla Jobe, Marsh and Bailey to tie things at 3-3.

Ellenburg came up with a tough block to get West Greene going again and then after an ace from Morgan Brown the Lady Buffs led 8-3.

Greeneville made it a one-point set at 10-9 when Marsh skillfully placed a kill from the back row, but West Greene pulled back out to a 14-11 advantage.

Jobe tied the set on a first-hit kill and followed with another kill that put Greeneville on top 19-18.

West Greene was able to tie things again at 22-22 on an ace by Madi Brown, but Marsh followed with a kill and Gray ended Greeneville’s 25-23 win with another kill.