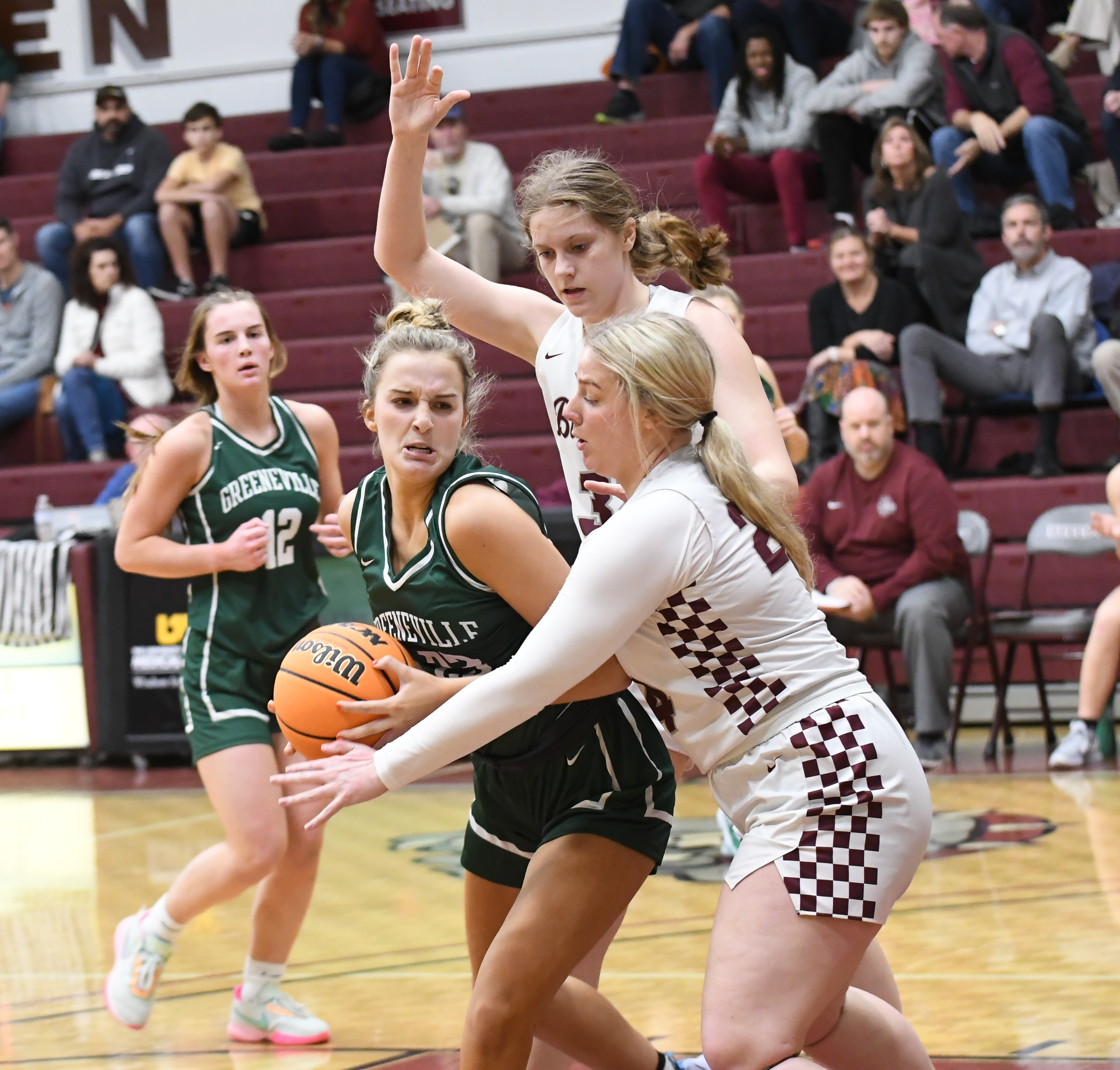 KNOXVILLE – The Greeneville girls did a lot of things right on Friday night against undefeated defending Class 4A state champion Bearden, but getting shots to fall was not one of them as they fell 56-45 to the Lady Bulldogs.

The Lady Devils were tough on defense and earned more than their share of turnovers, they were strong on the glass despite a size disadvantage and had plenty of second and third-chance opportunities, but shooting was their downfall.

“We left nothing out there, we played as hard as we could play. We pressed for 32 minutes. I’m proud of them,” Greeneville coach Annette Watts said. “We couldn’t go inside because of their size, but we were getting the pull-up jumpers and getting the threes, they just wouldn’t fall.”

Greeneville’s offensive woes started early on Friday as it took 6:40 for it to make a field goal.

Bearden’s 6’3” Florida State commit, Avery Treadwell, controlled the paint with her imposing size  while on the offensive end Lindsey Wilson and Kendall Murphy each hit three pointers on the way to a 12-2 lead.

Lauren Bailey finally broke through for Greeneville with a three-pointer and Dalaina Martin followed with a turnaround jumper from the block to close the gap to 12-7. Bearden finished the quarter leading 14-7.

Bearden scored the first five points of the second quarter but Greeneville followed with a pair of free throws from Martin and a jumper in the paint from Anna Shaw.

The Lady Bulldogs started moving the ball inside to Treadwell and she scored seven unanswered points in just over a minute to give Bearden a 26-11 lead.

Bailey made the most out of a pair of old-fashioned-three-point plays, but Bearden went to halftime leading 30-17.

Then second half was much more evenly played, but the hole the Lady Devils were already in was too big to overcome.

“We talked about it in the locker room after the game, we played much better in the second half,” Watts said. “We just have to do the things that we do, and there is no reason to have their heads down.”

Bearden did start the second half on a 10-3 run to go up 40-20, but Bailey broke the streak with a by banking in a trey from the right wing. She stole the ensuing inbound play, was fouled, and made both charity tosses.

Shaw then blocked a shot on the perimeter that Bailey turned into a breakaway opportunity. She was fouled again and made both free tosses to narrow the margin to 40-27.

Bearden opened up the game again with six straight points but in the final minute of the third quarter Greeneville got a jumper in the paint from Lindy Carter and a layup from Chloe Marsh through a pair of defenders to cut the Lady Bulldogs’ lead to 46-31.

The fourth quarter started much slower paced, but Greeneville was able to close the gap to 52-38 with Tambryn Ellenburg sinking a pair of three-pointers.

Natalya Hodge did most of the damage for Bearden in the fourth quarter with eight points in transition, while Greeneville’s half-court defense got better and made getting the ball inside to Treadwell difficult. Marsh, Bailey and Kaylee Crumbley turned in a combined effort on the ACC-bound center, holding her scoreless in the final frame.

Greeneville ended the game on a 7-2 run. Shaw set up five of those points with offensive rebounds. She put back one miss in the paint and then delivered to Bailey behind the arc for a triple that closed the gap to 56-45.

Bailey led Greeneville on Friday with 19 points. Hodge led Bearden with 17 points, and Treadwell had 15 points.

The Greeneville boys had a tough night in Knoxville on Friday as Bearden ran away to a 64-24 win over the Greene Devils.

Greeneville started the night by taking a 3-0 lead when Jayquan Price sank a triple from the corner, but that advantage was short lived.

The Bulldogs scored the next 15 points with five different players dropping a shot through the iron. On the other end Greeneville seemed to settle for a three-pointer on every possession and none of them were on the mark.

Hayden Goad broke Greeneville’s 6:27 scoreless drought with a putback, but Bearden led 18-5 after one quarter of play.

Just over a minute into the second quarter Bearden’s lead reached 25-5 when Jake Poole stole the ball and moved it ahead to Drew Brillhart for a layup.

Greeneville finally found some offense with Isaac McGill, Trey Thompson, Kam Lester and Price all getting points at the rim, but Poole sank a triple for the Bulldogs to keep Bearden in front 33-13.

Adjatay Dabbs saw his first action of the season for Greeneville on Friday after nursing an ankle injury, and in the third quarter he knocked down two three-pointers.

Bearden got 10 points from Poole in the period as the lead reached 58-21.

Poole led all scorers on Friday with 19 points.