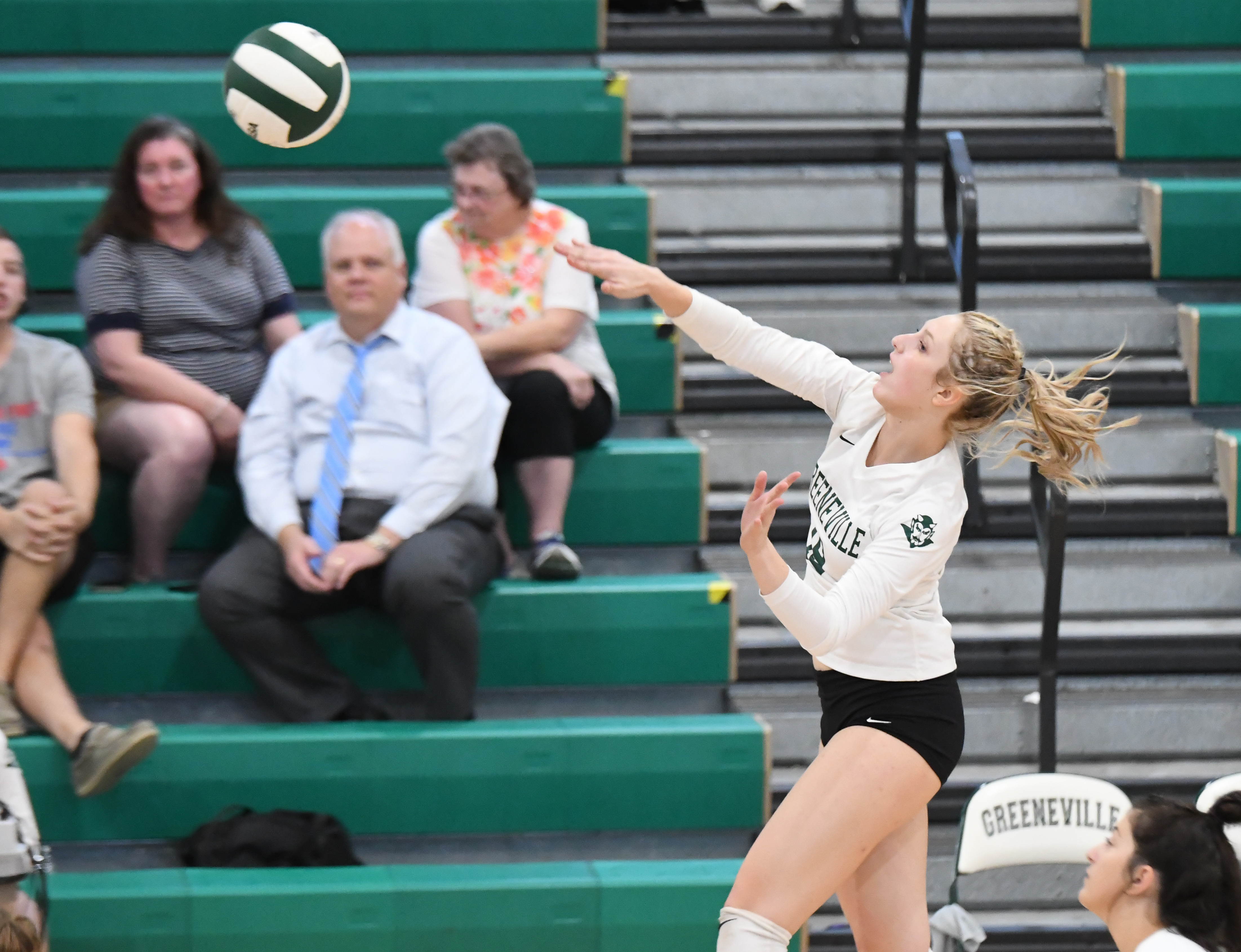 The Greeneville volleyball team marched into Chuckey-Doak’s castle and picked up a clean sweep over the Lady Knights to win in straight sets 25-23, 25-17, 25-10.

Chuckey-Doak would not go down without a fight, putting the Lady Devils against the wall late in the first set. But Greeneville would find a way to claw back and escape a narrow first set loss and cruise the rest of the way.

Hannah Gray ended a long first rally with a kill to put Greeneville ahead first and show the crowd how the night was going to go.

The Lady Black Knights showed tons of fight in the first set and fought blow-for-blow with the Lady Devils. They’d quickly put up three-straight scoring rallies to move ahead 3-1 on the back of a Bailey Fair tip over the net.

Another long rally ended with Hannah Gray leading the charge again and scoring off of a well-placed shot over the net. An ace by Lauren Bailey on the following serve put another point on the board for Greeneville.

Brianna Lowe followed that up with an ace on Chuckey-Doak’s side to break the tie and put them back on top 5-4. The Lady Knights put together a solid effort on four-straight rallies to go up 8-4 early in the first set.

Chloe Marsh would end their run with a shot over the net that was not returned. A few mistakes by Chuckey-Doak’s offense allowed Greeneville to inch back within one point at 9-8.

Each team would trade scores on four-straight rallies before the Lady Devils managed to win two-straight and tie the set at 11-11.

Kendra Key gave the Lady Knights their biggest lead since the opening of the set with a 20-17 advantage. A perfectly-placed volley into open space landed on the floor and spotted Chuckey-Doak another point.

The Lady Devils started mounting a comeback with Hannah Gray punching another point over the net followed by Lauren Bailey with a spike to tie the game at 20-20.

Faith Yokley tried to hold off the Lady Devils with a block at the net to propel Chuckey-Doak back into the lead. Bailey Fair would deliver two huge knocks over the net late in the set to keep their lead, 23-22.

Greeneville called a timeout to talk things over and strategize for the final moments of the set.

“I told them that they needed to have better ball control,” Greeneville Coach Sara Aiken mentioned. “I told them to be aggressive and use the volleyball IQ that they have to climb out of the deficit.”

Eden Aiken would set up Lauren Bailey to deliver a strong spike over the net and Kyla Jobe would return a shot that gave the Lady Devils the momentum they needed to regain the lead at 24-23. Bailey finished the set with an ace that won the first set in Greeneville’s favor.

Hayleigh Hensley used her height advantage to win a ball at the net and score the first point of the new set for Chuckey-Doak.

Addy Pruitt delivered a strong serving performance early in the second set with two-straight aces on the back line. A spike by Pruitt later added another point on the board.

The Lady Knights would again push out in front early with a 5-3 lead. Two straight kills by Bailey Fair and Heidi Buch would grow Chuckey-Doak’s lead to 7-4.

Bella Devoti sent a spike crashing to the floor to break the Lady Devils’ scoring spell.

Buch, Yokley, and Key kept the offense going for Chuckey-Doak with a kill each to grow the lead to 11-7.

Bailey, Aiken, and Gray swayed the momentum back to Greeneville’s side and handed it a 12-11 lead after five-straight scoring sets. All three earned a kill each with Jobe providing an ace.

“All of our attackers can do that so if they’ll focus and use that volleyball IQ and ball control then it’s huge,” Coach Aiken explained.

After a timeout, Fair earned a kill that tied the score again at 12-12.

Bailey’s kill on the next serve sparked a run for the Lady Devils that pushed them back in front and started a seven-point run for Greeneville that saw them gain a 19-13 lead.

Chloe Marsh tipped a shot over the net that the Lady Knight’s front line wasn’t expecting to grow the lead even further at 21-14.

Greeneville would run away with the second set and use that run to gain a 25-17 win.

The Lady Devils continued strong into the next set with Bella Devoti spiking the first rally of the third set and blocking another shot two serves later.

“Bella reaching, and using her height, and hitting over the block tonight, and moving the ball around was huge,” Coach Aiken said.

Bailey served her team three more points with three consecutive aces. Devoti stuffed another ball at the net and Chuckey-Doak would be forced to call a timeout down 9-1.

“At the beginning of that set she had three aces in-a-row, she had another serve, then aced again and had four aces on her first serving outing,” Coach Aiken stated. “Then she started catching a rhythm and she started clicking better.”

The Lady Knight’s defense handed them three-straight points to cut the lead back to 9-4 before Greeneville rattled off three-straight themselves to take a commanding 12-4 lead.

A tip over the net by Emma Ricker shut down Chuckey-Doak’s attempt at a comeback and saw their lead extend to 16-6.

Marsh rose up to smack the ball to the floor and put Greeneville back in the driver’s seat after a Lady Knight rally. Lauren Bailey’s spike late in the third set pushed her team ahead 21-8.

Fair would attempt to put some life into Chuckey-Doak with a block and an ace to cut into the lead, but Bailey’s spike seemingly put the contest away with Greeneville leading 23-10 in the closing moments.

The Lady Devils would finish off Chuckey-Doak in the third set, 25-10, to complete the sweep on the road and pick up another D2-AA win.

Hannah Gray led the Lady Devils with eight kills while Lauren Bailey, Chloe Marsh, and Bella Devoti all delivered seven each. Eden Aiken led in the assist category with 15 and Lanna Click added 13.

Chuckey-Doak returns to action Tuesday afternoon when they welcome conference foe Claiborne into their home gym. Greeneville will host Morristown East on Monday afternoon in their next contest.