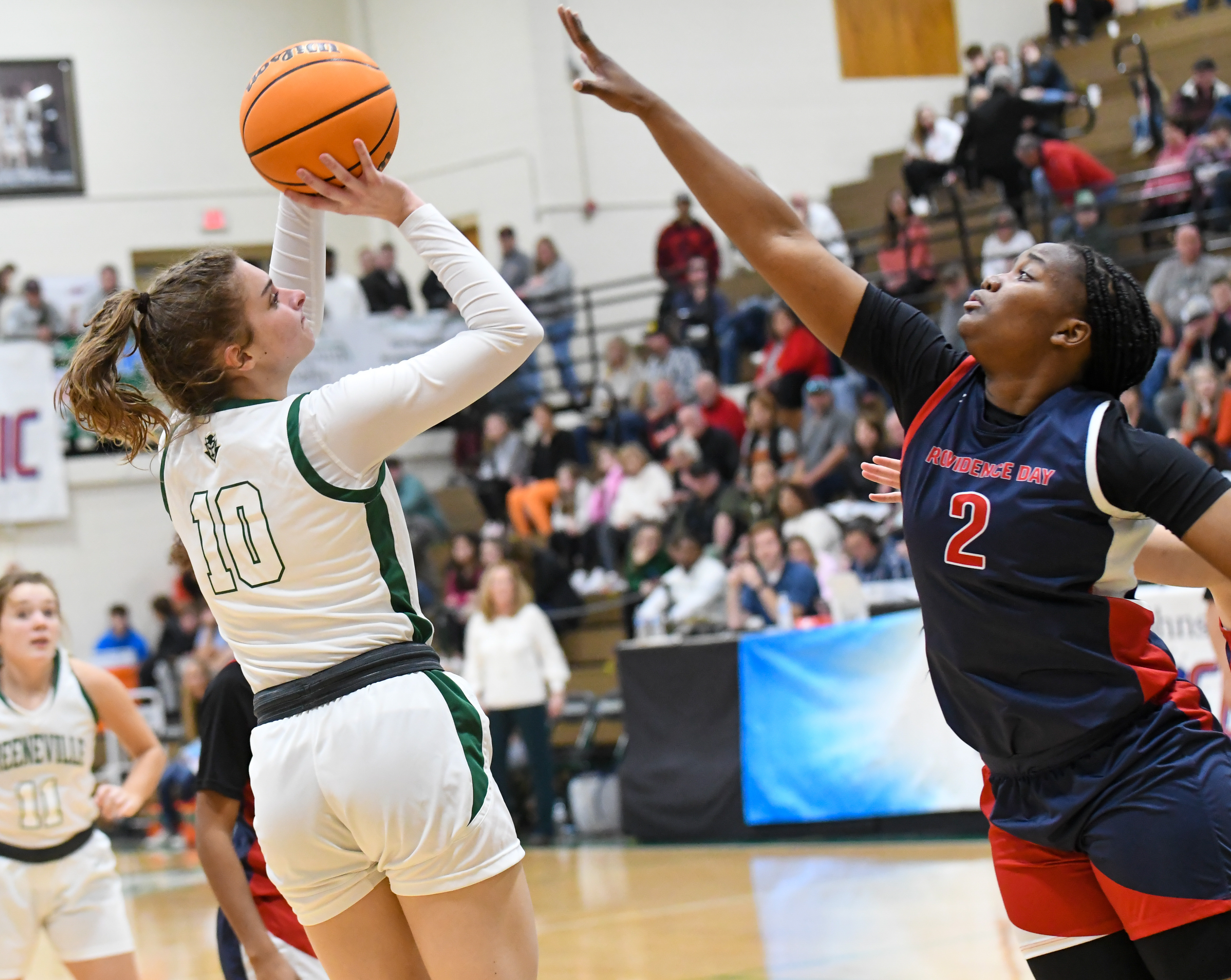 Greeneville got into a defensive battle on Wednesday at the Andrew Johnson Bank Ladies Classic, and the Lady Devils rose to the occasion to take down Providence Day Academy of North Carolina 57-40 and advanced to the tournaments quarterfinals.

“We’ve not played in 12 days, and we had to shake the rust off. No matter how hard you practice you just can’t emulate a game,” Greeneville coach Annette Watts said. “And the funny thing is I taught (Providence Day coach) Josh (Springer) how to scout games, and no matter what play I called he knew what it was. They came in prepared, and we’ve never played anybody that knew exactly what we were doing. We had trouble countering, but that is my fault … But in the second half we looked much more like ourselves. We got big buckets from Tambryn (Ellenburg) and big rebounds from Lauren (Bailey) and Chloe (Marsh).”

The Lady Devils got past their first hurdle on Wednesday as they try to get back to the tournament’s championship game for the second year in a row, and now they turn their attention to Cleveland for a matchup at 7:30 p.m. on Thursday against the 15-4 Lady Blue Raiders. Last year Greeneville knocked off Cleveland 58-56 in the first round of the tournament and large portions of both lineups return.

“Winning the first one is the hardest. You have some nerves going in, and its tough to get this first win here. Hopefully now those nerves are behind us and we are ready to come back tomorrow,” Watts said.

On Thursday both teams came out of the gate ready to play, and neither offense seemed to be able to gain the upper hand in the chess match, but Greeneville’s Tambryn Ellenburg was able to break the game open with a triple from deep along the right wing. After taking the lead the Lady Devils never fell behind the rest of the night.

Ellenburg led Greeneville on Wednesday with 17 points, including five three-pointers, and while the Lady Chargers made it difficult for Greeneville to get good looks inside the Lady Devils’ senior kept finding ways to strike from deep when her team needed it most.

“She is ready to step out there and shoot it,” Watts said. “I know a lot of people said ‘Whoa’ when she shot from the green line back there, but she has the green light. I told her tonight if your feet are set, shoot it.”

Greeneville’s lead grew to 7-2 when Lindy Carter converted on a third-chance opportunity, but Providence kept pace from behind the arc with Jaida McClure, Sophie Levine and Jordyn Latter all hitting from deep to narrow the margin to 13-12 at the close of the first quarter.

The second quarter began just like the first, with Ellenburg firing from around 24 feet along the right wing and pushing the advantage to 16-12. Next Anna Shaw got loose in transition after grabbing a rebound and found Ellenburg wide open for another triple.

The Lady Chargers were able to tie things up at 20-20 with 2:49 left in the first half when Katelyn Ramsden was able to get a floater to roll in.

On the trip the other way Lauren Bailey sank a tough shot from the block while taking contact from a pair of defenders. She missed the free throw, but Carter grabbed it and was fouled going back up. Carter made both charity tosses to give Greeneville a 24-20 lead.

Greeneville owned the boards on Wednesday, outrebounding the Lady Chargers 38-18. Bailey led the way with 14 rebounds to go with 10 points. Chloe Marsh had nine rebounds and Shaw pulled in eight rebounds.

“We rebounded the daylights out of the ball,” Watts said. “If our shots aren’t falling we have to have a nose for the ball to go put it back in.”

The Lady Devils went to halftime leading 26-24, and the score stayed there for the first 3:14 of the second half as each defense turned away everything the opposing offense threw at it.

Again it was Ellenburg that got the Lady Devils’ offense going as she fired in a triple off of an inbound pass.

Providence answered with Latter driving to the rack twice to knot things at 30-30 with 2:06 left in the third period.

Kyla Jobe gave the lead back to Greeneville by reluctantly lobbing in a triple when the Lady Chargers refused to come out and guard her. On the ensuing inbound pass Ellenburg and Marsh trapped the ball on the baseline, and Bailey took advantage by turning a turnover into one of the contest’s few uncontested baskets.

Marsh and Jobe finished out the quarter with layups as Greeneville went to the final frame leading 40-32.

In the fourth quarter Greeneville was able to find a little more success on offense while the defense never let up, and that led to the Lady Devils pulling away to the win.

Ellenburg and Carter both connected from behind the arc to stretch the lead to 51-36 while the team went 7-for-8 at the foul line in the period to hold off any Lady Chargers’ comeback hopes.

Carter was also in double figures for Greeneville with 13 points. Latter led the Lady Chargers with 19 points.

Providence will be back in action against South Greene on Thursday at 12 p.m.

In the final game of the night on day two of the Andrew Johnson Bank Ladies Classic Cleveland’s length, speed and shooting prowess proved too much for South Greene as the Lady Blue Raiders captured a 76-42 win on Wednesday.

The first quarter started with the teams trading buckets on the way to an 8-8 tie at the midway point. South Greene got three-pointers from Haley Susong and Hailey Brooks.

Cleveland was able to end the quarter on a three-point barrage with Paige Moody, Tyria Tanner, Milah Williams and Lauren Hurst all hitting from deep to open up a 22-14 lead.

South Greene was able to close the gap to 25-21 after Susong side stepped the defense to fire in a triple before Jordyn Roderick scored from the block.

The Lady Raiders answered with four points apiece from Williams and Hurst to take a 33-21 lead.

Brooks scored four points in the closing stretch of the first half for South Greene, but the Lady Rebels could not put another dent in the lead, trailing 40-27 at the break.

Cleveland’s defense shutout the Lady Rebels for the first four minutes of the third quarter while stretching the lead to 49-27.

While the Lady Rebels could not get the ball inside, they eventually found some openings from the outside to make one final run. Arianna Hoese got things going with a three-pointer from the right wing while Madison Hensley and Roderick followed with triples that cut the deficit to 51-38.

South Greene would get no closer and went into the final period trailing 58-40.

The fourth quarter really turned against the Lady Rebels as they failed to score for the first 6:35 of the period.

On the other end of the floor Cleveland got six points from Tyria Tanner and five points from Tamiah Tanner on the way to a 76-42 win.

South Greene will play next on Thursday at 12 p.m. against Providence Day while Cleveland will take on Greeneville at 7:30 p.m.