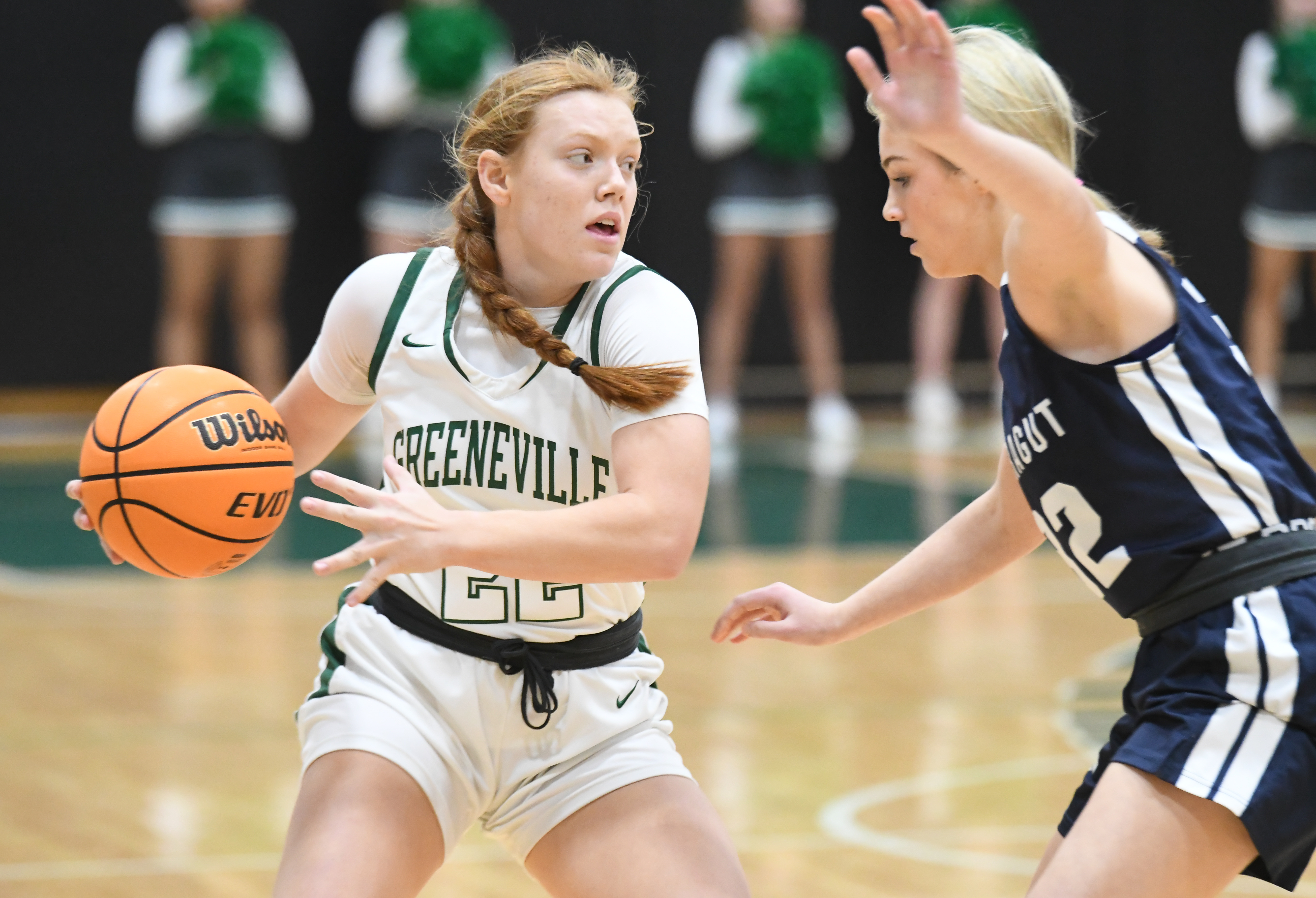 The Greeneville girls had to step up in a big way in the fourth quarter on Saturday night to pull away from Farragut and earn their fourth win of the week.

The Lady Devils went into the final frame in a deadlock, but they made the tough plays in the paint late to earn a 69-57 win over the Class 4A  state runners-up from a year ago.

“For us to play seven or eight players at the most and to come out 4-0 in a week is really something. That’s a pretty good week,” Greeneville coach Annette Watts said. “The girls were really upset at the half because of our defense, and I knew my team would change it. It took us a little bit to get going, but what a great game.”

Saturday’s fourth quarter started with the teams tied at 48-48. Lindy Carter quickly gave the Lady Devils the lead back when she caught the ball on the block and powered in a bucket.

That set the tone for the period as Greeneville began to focus on getting the ball inside, and all the Lady Admirals could do was foul them. Anna Shaw, Chloe Marsh and Lauren Bailey all made trips to the foul line by the midway point of the period on the way to a 55-50 lead.

“The girls were mad going into the fourth quarter, we just had to stop throwing it away and play defense. They were very adamant about taking care of business tonight. We knew our game plan and they went and executed it in the fourth quarter,” Watts said.

With 3:42 left to play Bailey knocked down a three-pointer from the left wing to put the Lady Devils in front 60-50, but on the trip the other way Farragut’s Lucy Beck also hit from behind the arc.

Marsh made the score 65-54 after Bailey deflected an inbound pass and she picked it up and quickly put it in. From there Bailey and Tambryn Ellenburg finished out the night at the charity stripe to keep the Lady Devils in front.

In the fourth quarter Greeneville went to the free-throw line eight times on six shooting fouls, and went 14-of-16 at the stripe in that stretch to pull away from the Lady Admirals.

“We started taking it to the hole and getting good shots,” Watts said. “We knew they had freshman that Choe could outmaneuver, and we felt like Lauren could get around her girl. We didn’t seem to have the touch outside tonight, so we had to be intentional about getting inside.”

Mash and Bailey each scored six points in the fourth quarter and led the Lady Devils in scoring on Saturday. Marsh finished the night with a game high 23 points while Bailey put in 17 points.

Saturday’s first quarter began with Greeneville getting four points off the bench from Kyla Jobe while Farragut got triples from Annie Priest and Maelyn McNeally on the way to an 8-8 tie.

With 3:35 left in the opening period Carter hit a fade-away, turnaround from the block to put Greeneville in front, and the Lady Devils never played from behind the rest of the night.

Shaw followed by racing the length of floor for a lay in and Bailey capped a 10-0 run with a pull-up jumper from the short corner.

Jobe finished the opening period with a short jumper and Greeneville went to the second quarter leading 20-11.

In the early portion of the second quarter Farragut got three-pointers from Priest and Beck to close the gap to 25-21. Bailey then made a slippery drive through traffic for two points and Shaw sank a corner trey to push Greeneville back out to a 30-23 advantage.

Over the final three minutes of the first half the teams traded buckets with Marsh scoring six points for Greeneville on the way to a 40-32 halftime lead.

Jobe got the second half started with a triple for the Lady Devils, but Farragut answered with a deep shot from Priest.

Greeneville’s offense slowed down in the period and did not make a field goal over the final five minutes. On the other end of the floor the Lady Admirals closed the gap to 47-45 when Hannah Enderson hit from behind the arc.

Farragut then held possession for the final 1:50 of the third quarter before McNealy hit from deep just before the buzzer to tie things at 48-48.

Priest led Farragut on Saturday with 16 points while McNealy scored 13 points. Jobe was also in double figures for Greeneville with 11 points.

After four games in a week things will not get any easier for the Lady Devils as they head to Cocke County on Tuesday for a key District 2-3A matchup.

The Greeneville boys fought to the finish on Saturday night, but they could not dig out of the hole they found themselves in early in a 70-55 loss to Farragut.

Jayquan Price scored the first points of the night on a nice finger roll, but then Admirals scored the next 10. Dominc Vanacker but back a pair of misses in the opening stretch and second-chance opportunities propelled the Admirals’ offense all night long.

Trey Thompson closed the gap to 10-5 with a three-pointer for the Devils, but then Farragut closed the first quarter with triples from Tyson Jackson, Aiden Vanacker and Brevin Swartzentruber for a 22-9 advantage.

The three ball carried Farragut early in the second quarter with Aiden Vanacker hitting from deep twice while Dallas Carbaugh sank another as the lead grew 35-13.

Over the final four minutes of the first half Greeneville got five points from Thompson and a triple from Price, but the Admirals led 41-21 at intermission.

The lead grew to 46-21 before Greeneville started to get some things going on offense in the third period. Adjataty Dabbs scored nine points in a three-minute stretch to narrow the margin to 50-32.

Then over the final 1:43 of the quarter Thompson, Price and Dabbs all hit from behind the arc to close the gap to 55-41.

The Devils relied on the deep shot early in the fourth quarter and kept chipping away the Admirals’ lead. At the midway point J.D. Woolsey found Dabbs open in the corner for a trey that that brought Greeneville to within 12 points at 62-50.

Greeneville got as close as 11 points with 3:33 remaining when Thompson gave Dabbs an inside-out feed from the block for another triple that made it 64-53.

After that the shots stopped falling for Greeneville and the Admirals finished with a 70-55 win.

Dabbs led Greeneville on Saturday with 22 points, 20 coming in the second half. Thompson had 13 points, and Price put in 10 points for the Devils.