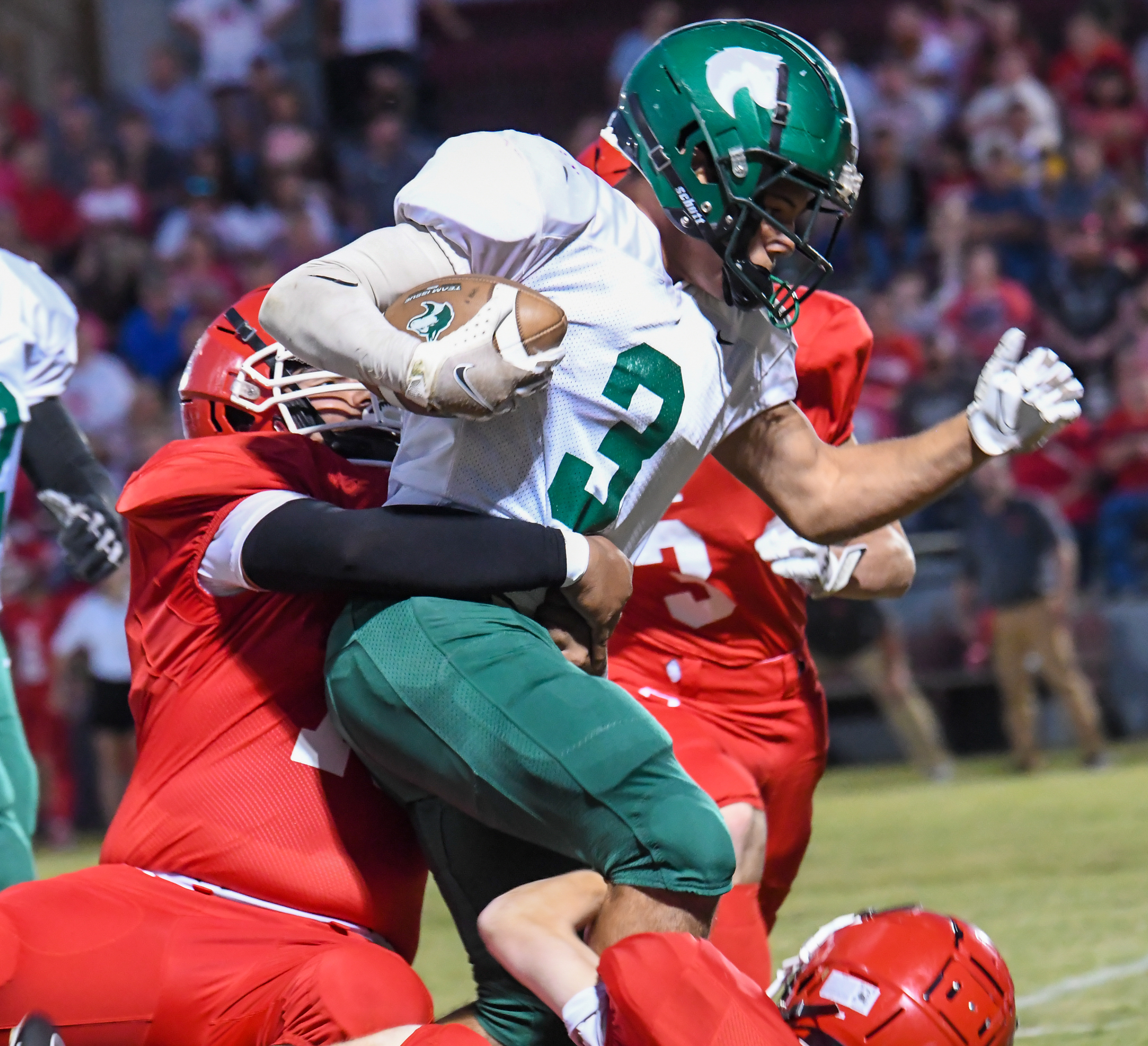 “Coming in I felt we matched up with this team and we came out of the gate strong,” North Greene coach Eric Tilson said. “Credit to them. They made a good adjustment, and we tried to make adjustments, and we just didn’t execute. They took us out of our game plan. There was some good from tonight, but we have long way to go and tonight proved that.”

The night started with three consecutive penalties by the Bulldogs that gave North Greene 23 free yards. Then the Huskies’ running game got rolling with tailback Yeshua Vaught picking up 16 yards and quarterback Grayson Collins going for nine yards.

The drive culminated with Vaught going off tackle to the right from the 14-yard line. He juked one defender at the line of scrimmage and then carried two defenders across the goal line for a 6-0 lead with 9:34 left in the first half.

North Greene ran for 40 yards on the opening drive, but then Bulldogs switched to a five-man defensive front and held them to 72 yards on the ground for the remainder of the night, 31 of those yards came in the fourth quarter.

“They moved to a five-down front after the first drive. We like to pull a lot and that took us out of our pull game,” Tilson said. “We have two freshman, and a sophomore up front and that makes it difficult to make adjustments. The closer you get to the football the harder it is to play early, because there are a lot of moving parts in the trenches. I do think we finally got comfortable with our adjustments, but it was too late at that point.”

The Huskies defense stopped the Bulldogs on downs on their first two drive of the night, but midway through the second quarter Red Boiling Springs was able to earn the equalizer.  Quarterback Aubrey Link booted to his right and found Chris Hackney on a quick out for a five-yard score. The extra point drifted wide and the score sat at 6-6 with 6:03 left in the first half.

Hackney quickly returned the ball to his offense when he jumped a route and intercepted Collins on North Greene’s first play of the ensuing drive.

The Bulldogs got the ball back with 46 seconds left before halftime and added to their lead before the break. Link found Dalton Dallas on a wheel route, and he raced past the Huskies up the right boundary for a 45-yard touchdown that made the score 19-6 at intermission.

Link and Dallas’ big-play connection continued into the third quarter. On the opening series of the second half Dallas pulled in a pass on a slant that went for a 44-yard touchdown.

Red Boiling Springs’ lead grew to 33-6 with 1:43 left in the third quarter Tyler Lancaster took a handoff up the middle for a 23-yard score.

On the ensuing kickoff North Greene tried to get tricky with Jake Duffy handing to Vaught, but the exchange was fumbled. Dallas scooped it up and ran 25 yards to push the lead to 39-6.

North Greene was able to get on the board once more before time expired with Christian Cogdill charging across the goal line from one yard away.