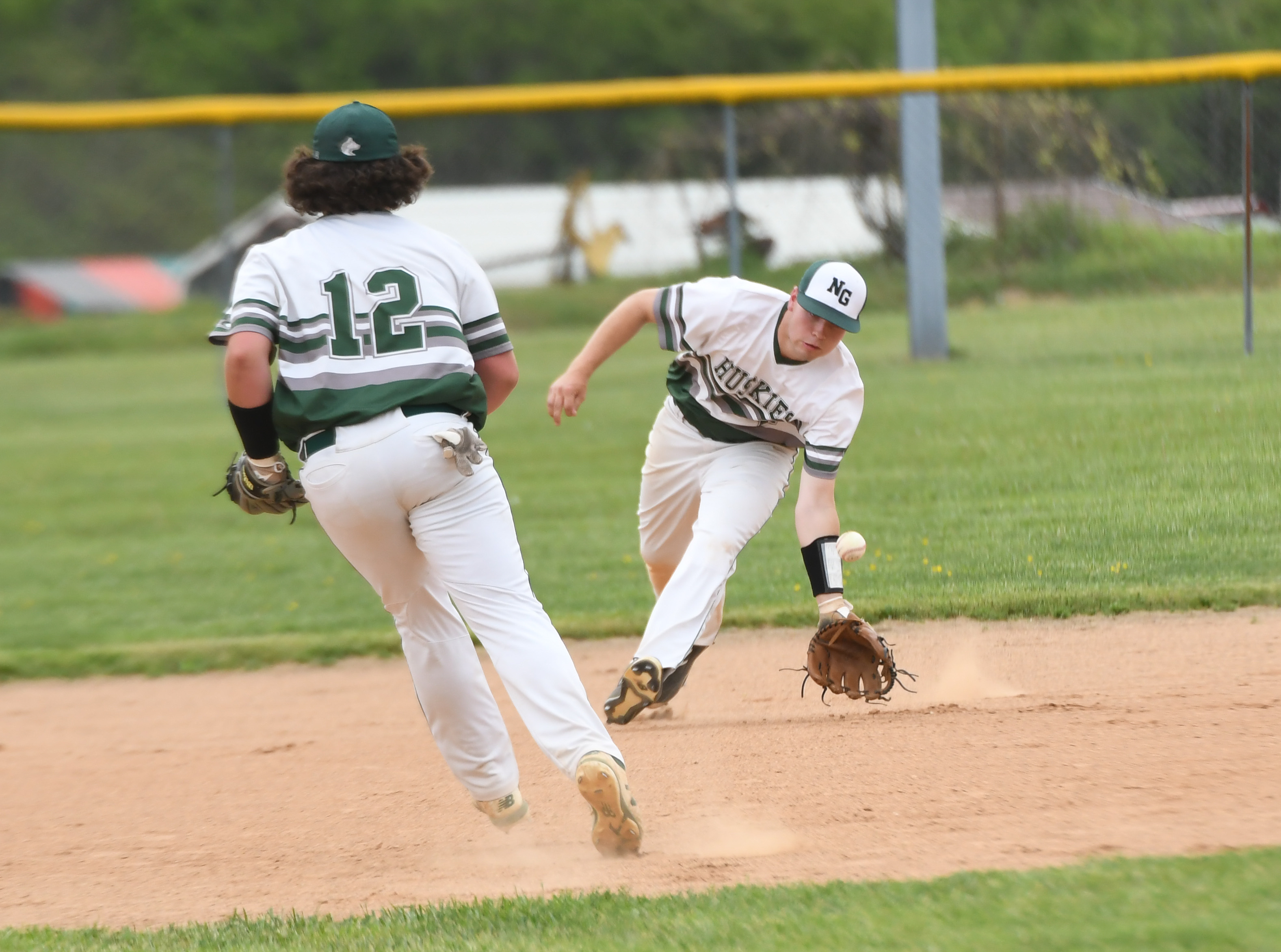 Hampton jumped out to an early advantage and rode that confidence wave all the way to an 8-2 win over North Greene Wednesday afternoon in the District 1-1A Tournament.

The loss brings an end to the Huskies season while the Bulldogs move on to the region tournament for the first time more than two decades.

“We just didn’t have it today. One teams got to lose and unfortunately it was us,” North Greene Coach Jason Lowe mentioned. "We dug ourselves a hole early. We did it Monday and we climbed out of it, but sometimes you just can’t do it.”

Chance Point set the pace for Hampton upon the first at-bat with a soaring triple to centerfield that would turn into a run when Morgan Lyons knocked him home. Lyons scored the second run for the Bulldogs with clever base running on the line. A throw to first base gave him enough time to squeeze home before a tag at the plate.

Jeshua Crawford got McKinley Kuhn to ground out to end the top frame.

Damian Burns worked a walk for the Huskies in the bottom half, but a hitless inning for North Greene would have them trailing 2-0 after one.

Crawford readjusted on the mound and retired Johnathan Greenwell and Kyler Lewis on strikes to provide a quick inning of work for the Huskies in the second inning.

In the third inning Drexel Gant got on base during a double play attempt and worked his way to second base with a steal. Harkleroad’s bat provided North Greene’s first run of the afternoon with a liner into right field.

Gant scored, but Harkleroad was tagged out on a rundown to second and North Greene settled with only one run. The Huskies cut into the Bulldogs' lead and trailed 2-1 after three innings played.

Crawford allowed two men to hop aboard with no outs, but quickly gained two quick ones on the base path. Kuhn fell on a force out at second base and Collin Morgan was tagged at home on a run down situation. Crawford finished the inning by striking out Kyler Lewis while looking and worked his way out of the jam.

“He hadn’t thrown since April 30th. His arm felt good. He threw the ball well,” Coach Lowe said of Crawford. “He gave us everything he had and I knew going into this game that I wanted my best out there. So if I’m going to lose, I’m going to lose with my best.”

Brody Hicks led off the fifth inning with a hit that slipped under Colton Robbins’ glove in left field. Chance Point moved him over to third after running out a throw to first and earning a spot on base after Seth Charlton pulled off the bag.

Lyons pounded a ball into deep right field and drove home three runs, including himself, after turning the corner and stomping on home for an inside-the-park homer that gave the Bulldogs a 5-1 lead.

Jeshua Crawford pitched a scoreless 1-2-3 inning to keep Hampton on their toes at the plate.

Conor Jones made a great sliding grab at second base but couldn’t find his target on the throw to first and gifted Damian Burns with a safe knock. Crawford laced a grounder through the gap in the infield and both runners gained an extra bag after a failed catch on the relay back home.

North Greene found themselves with the bases loaded for the second straight inning, but this time with no outs.

Seth Charleton forced Burns out at home but Colton Robbins would get Mason Smith home on ground ball up the middle that would be attempted for a double play.

Hampton’s Josh Whitson resolved the issue at hand and struckout Adam Weir to retire North Greene’s bats without allowing more than one run in the jam.

Morgan Lyons walked to first base with two outs and thieved his way to second base. Caleb Royston drilled a ball past North Greene’s defense and led Lyons home for his third run of the evening.

McKinley Kuhn dropped a blooper into left field that scored two more and seemingly put the game out of reach.

“Hats off to them. They had some hard hit balls and we just didn’t make the plays,” Coach Lowe said.

“I want to thank the seniors and all the hard work they’ve put in. That’s the hard part about coaching, saying goodbye to those guys you’ve spent countless hours with. I just wish them the best of luck.”

Lowe left off with, “I’m proud of them. With what we lost last year, a lot of people didn’t even think we’d be in the conversation. But we gave ourselves a chance and we unfortunately didn’t get it done.”