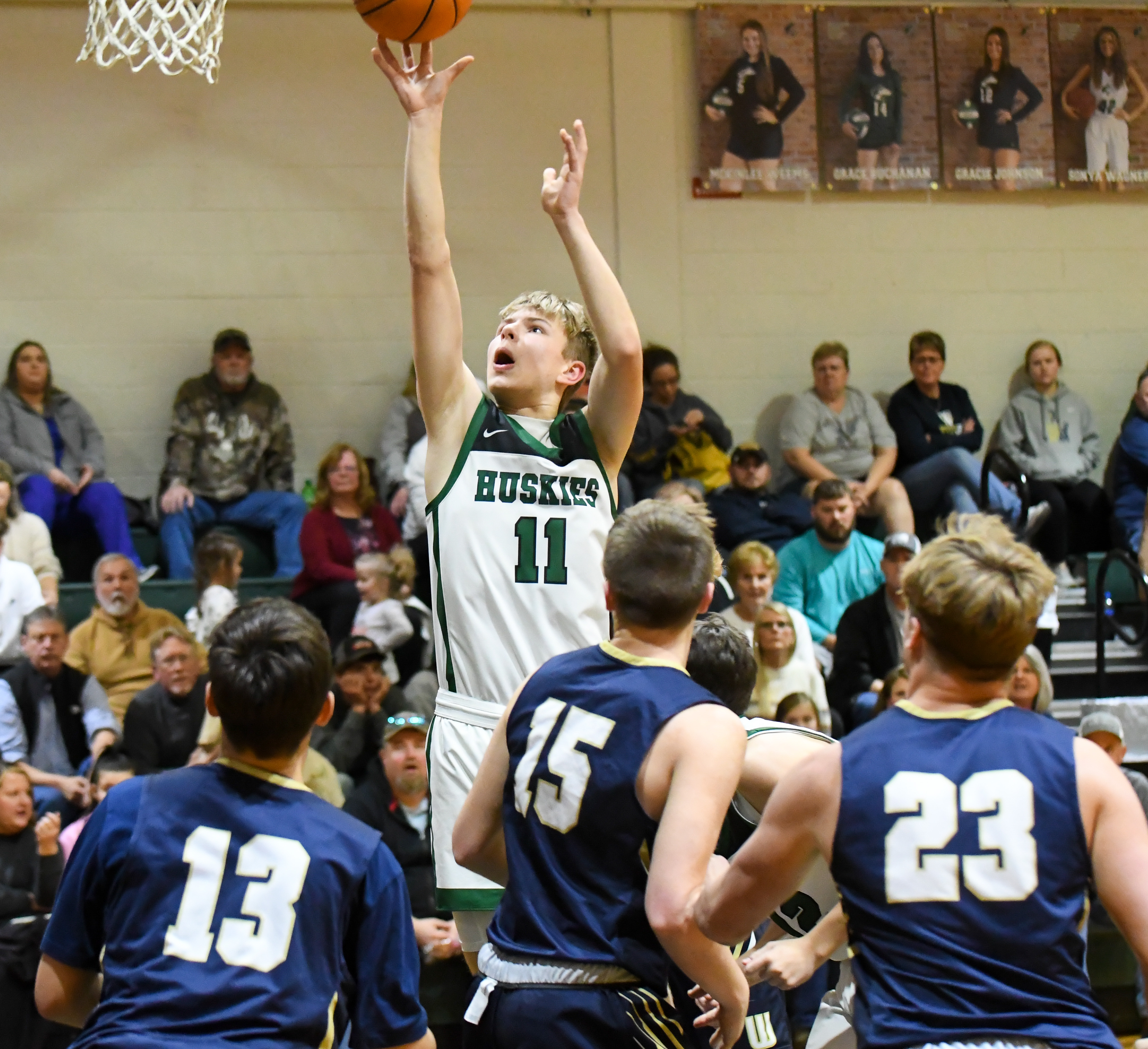 North Greene coach Sam Tarlton was proud of how well his team executed the game plan on Tuesday night.

On offense the Huskies spread the ball around and found the right shots, and on defense a concentrated effort slowed down West Greene’s star guard, Leyton Frye, resulting in a 67-56 win over their cross-county rivals.

“This was one of the best times all year, that they executed what we are trying to do,” Tarlton said. “Especially defensively, and especially the first half. Overall we made it tough on Frye, and that was our goal. Offensively we had a lot of guys being aggressive. If this is a night where our shots fall, we win this one easily. We had a lot of shots rattle out on us tonight, but we had a lot of guys getting open.”

The Huskies game plan on defense was to not give Frye any room to breathe on Tuesday, and while the Buffaloes’ top scorer put in 20 points that was half of what he did the night before at Cherokee. The evening started with Lawson Davenport locking him down, and Dennis Malone helped out along the way. Both made sure that every point Frye scored was hard earned.

“Lawson and Dennis both did a great job tonight,” Tarlton said. “They are playing the man-to-man part of that diamond, and their job was to try to push him downhill. Then I thought our helpers were great. Against a guy that good it has to be a whole team effort.”

The action started on Tuesday with seven points from West Greene’s Ethan Turner creating a 7-7 deadlock midway through the first quarter.

With 3:19 left in the first period Jason Britton darted through the lane for a layup that put North Greene in front 9-7, and the Huskies played from in front the rest of the night.

A lay in from Bennett McLain followed, and then just before the buzzer Britton went the length of the floor for two points and a 13-8 Huskies’ lead.

Less than a minute into the second quarter Davenport sank a triple to put North Greene on top 18-10, but the Buffs kept fighting back. With 4:07 left in the first half Turner powered in a layup to make it 21-18, and Frye followed with a triple that made it 24-21.

Over the final 3:36 of the first half North Greene sank five three-pointers to pull way to a 38-26 lead at the break. Britton and Lance Carrico each hit two deep shots, and then at the buzzer Luca May connected on the fifth.

In the third quarter North Greene got early triples from Carrico and Sam English as the lead grew to 44-30.

Britton followed with a pair of layups and then Carrico sank a pair of free throws after an intentional foul was assessed on the Buffs to give North Greene a 52-34 lead.

Turner scored the final three points of the first half to shrink the lead to 52-37.

West Greene’s Conner Campbell got the fourth quarter started with a pair of triples that closed the gap to 53-43. That was as close as the Buffaloes would get as Britton scored North Greene’s next five points while West Greene missed four free throws in the same stretch.

Over the final two minutes Frye scored seven points for West Greene, but it was not enough to bring his team back into it.

Britton led all scorers on Tuesday with 27 points and Carrico added 11 points for the Huskies.

Turner finished with 19 points for West Greene to go with Frye’s 20 points.