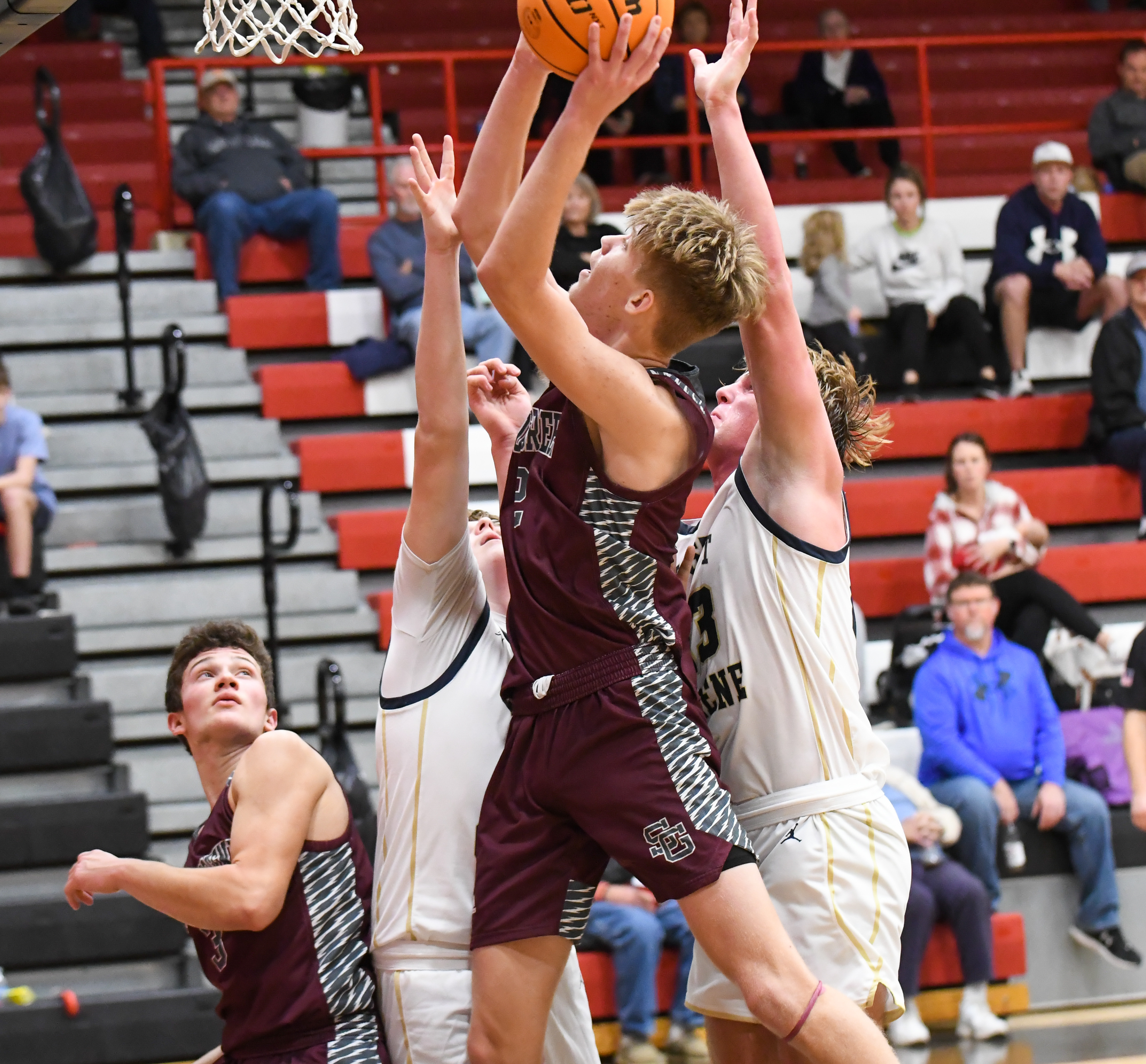 ROGERSVILLE – The South Greene boys played some of their best basketball early on Tuesday night and used that to take control of the Big H BBQ Bash championship game at Cherokee High School before downing rival West Greene 67-51.

“The more times you play the harder it is to beat people, and for that very reason I am proud of our kids tonight,” South Greene coach Terry Hoese said. “To come out here and win the way we won was good see, especially that first half. Everyone was working together, and everyone shared the basketball. That’s the stuff I saw from them this summer that we had not been getting so far. We had kids backdoor cutting for layups, and kids diving on the floor, we had different guys scoring. If we can keep that going I look forward to where we can get.”

While a tournament championship in December did not make the Rebels’ preseason goals Hoese does hope that winning three games in four days does prepare his team for the tournaments that matter more in a couple of months.

“We’ve played 16 games in a little over a month and three games in four days here,” Hoese said. “That’s a lot of basketball. That’s what tournament time is about. We are long way from the district tournament, but at least these guys have proven they can do it.”

Tuesday’s action started with the teams playing to a 7-7 tie midway through the opening period, but the Rebels were able to close the quarter on a 9-0 run to earn a 16-7 advantage.

Hunter Toth was the primary recipient of South Greene’s active ball movement, and he started the run by cutting to the basket and laying in a feed from Jase Roderick. That gave the Rebels a lead they would hold the rest of the night. Next Toth nailed a triple from the right wing and followed that with a jumper from the top of the key. The quarter closed with Roderick getting the ball on the block and sinking a turn-around jumper.

South Greene’s run continued into the second  quarter where after a long possession Toth found himself open from beyond the elbow for three points. Toth put in 20 points on Tuesday, just one day after he was the only South Greene player that did not score in a 72-47 win over Cherokee.

“We watched Hunter all preseason and my expectations were that he would be doing this all the time,” Hoese said. “He’s had a slow start, but he is very capable. I am very happy for him because he has been a little down on himself, and I’ve been on his hind end at times. He works his tail off and deserved to have a night like this.”

The Rebels’ lead grew to 21-7 before Leyton Frye broke the 14-0 run with a fade-away jumper from the right wing. Frye then pulled up from deep beyond the arc to close the gap to 21-12.

T.J. Buckner and Toth then set up Roderick for a pair of layups before Buckner put down a two-handed slam that put South Greene in front 27-12 with 4:18 left in the first half.

West Greene got six more points from Frye before the half ended and Ethan Turner sank a three pointer to close the gap to 33-21 at intermission.

While the Rebels found a lot of success on offense with movement and passing in the first half things began to stagnate in the third quarter, and the Buffaloes took advantage.

Andrew Thornburg did hit a triple for the Rebels in the first minute of the second half, but then Frye started to get warmed up. At the midway point of the third quarter he was fouled on a three-pointer and made all three of his tosses to close the gap to 38-31.

The quarter then came to a close with Frye using his shifty handle to create separation before draining a step-back trey that brought West Greene to within three points at 44-39.

The Buffaloes twice more made it a five-point game, and with 3:37 left Frye slashed through the lane to cut South Greene’s lead to 52-49.

On the other end of the floor it was Roderick who kept South Greene in front as he forced his way into the paint and scored six points for the Rebels. Roderick led South Greene on Tuesday with 22 points, and when things were not going as smoothly in the second half he was able to score a tough 12 points to keep his team in front.

“At the end of the game we were leaking oil and I told Jase to go get the ball. I told him spread the court, and he decided he was going to go get buckets. He made his free throws too,” Hoese said. “Jase is turning into a really good basketball player and I look forward to seeing where that guy winds up. He has a lot of good tools.”

Defense started to show up for the Rebels over the final three minutes and held the Buffaloes without another field goal while giving up just two more points.

Buckner attacked the basket for four points to give South Greene a cushion at 56-49, and Toth finished the night by going 6-of-6 at the foul line as the Rebels ended the night with a 16-point advantage.

Free throw shooting was a strong point for both teams on Tuesday, as they each went 13-of-14 at the stripe.

Frye led West Greene on Tuesday for 34 points while Turner had 10 points. Marshall was also in doubles figures for South Greene with 12 points.